Cllr Brodie, who last month said he felt he’d been misled over the Highways PFI, will be raising the issue at next week’s full council. 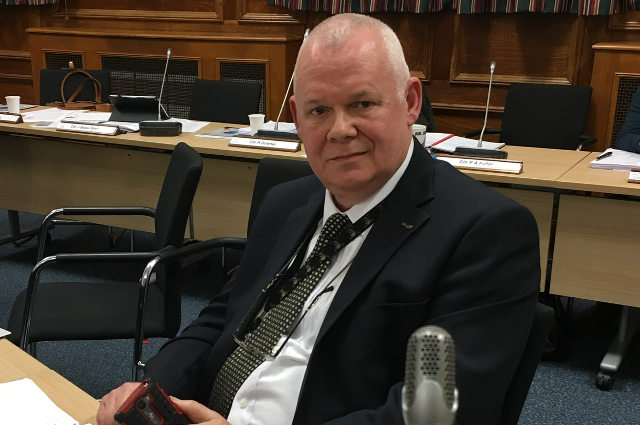 Cllr Geoff Brodie, who last month said he felt misled over the Highways PFI and called for transparency from Island Roads, will be raising the issue at next week’s Full Council meeting.

Cllr Brodie will ask the leader,

“Can you explain why your administration is allowing Island Roads off the hook of delivering on the original promises to Islanders, made during a previous Conservative administration, to resurface all of the highway network during the seven-year core investment period?”

As reported by OnTheWight, in response to Cllr Brodie’s recent public questioning of the delivery of the Island Roads original ‘core investment programme’ promises, the Cabinet member, Cllr Ian Ward, told the media:

“Although the plan was for all our roads to be resurfaced, this changed when government funding for the highways PFI project was reduced by 30 per cent in 2010.”

Refurbishment of 818km of roads
Included in his question to the council leader, Cllr Brodie says,

Research shows that there was an “urgent” IW Council cabinet report of 29 May 2012, just weeks before the PFI contract was signed in August 2012.

This report’s paragraph 8 states: “The scope of the project…has broadly remained the unchanged since December 2009, despite the reduction in grant funding. The project team… has focused on improving value for money… the consequence of which has been to achieve the same scope.”

“According to Cllr Ward’s recent media statement, just 463km of Island roads have been resurfaced as the CIP draws to a close; uncomfortably close to only 50 per cent of the works promised back in 2012.”

newest oldest most voted
peterj
There’s a nasty whiff around this whole deal and it’s not the smell of hot tarmac. From the hundreds of thousands pocketed by Jay Jayasundara for setting it up and now trying to ‘save money’ by negotiating cuts to the contract (and you have to believe Island Roads won’t be giving up any of their gold-plated profits in these mythical ‘savings’) to the secrecy around what exactly… Read more »
Vote Up65-1Vote Down
Phil Jordan
What the council are missing in their headlong rush to *cut* the scope of the contract is that there are now huge contractual penalties and potential fines that – on the figures of kms given out – could be imposed and would run into substantial sums of money. And it has not just happened. I am aware that Milestones were being missed two years ago (Milestones are… Read more »
Vote Up560Vote Down
charlest

Does this loss of funds explain why so many of the new surfaces are showing major cracks already? Surely Island Roads need to fix this before any other work is done. Their previous excuse of it being due to weather is a bit odd.

Vote Up550Vote Down
YJC
I generally feel that Island Roads has done a good job , but I suppose, mainly because any roads they resurfaced will be a vast improvement on what they were before. But I have been bewildered sometimes by the choice of some areas that have been resurfaced. A cul-de-sac in Bembridge with only four homes had the pavement newly tarmaced. The old pavement seemed okay. No one… Read more »
Vote Up42-6Vote Down
davimel
It’s all about Km laid, not the locations as such. If IR can lay a 1Km stretch spread over empty cul-de-sacs and roads then they are seen to have met certain criteria. Major re-surfacing projects cost them huge sums in both time and money and disruption and they shy away from these projects whenever they can. They haven’t done a bad job per se, they have just… Read more »
Vote Up7-11Vote Down
Phil Jordan
Davimel: That’s just not correct I’m afraid. It is very much about the *where* of resurfacing as the amount. The contract dictates what roads are done and where through geographical apportioning of the Island and through road hierarchy distinctions (there are four types). It also includes a seven year (where most, if not all, other PFI core investment periods are five year) CIP during which time roads… Read more »
Vote Up23-3Vote Down
tosh
Phil Jordan makes a lot of sense but I fear that this council will totally ignore his comments . Just look at 2 roads that have been resurfaced in the last 2 years, Park Rd Wootton and briddlesford road .Park Rd has some very long cracks over at least 25% of its length and briddlesford road is braking up from Station Rd to Combleywood road on both… Read more »
Vote Up16-2Vote Down
block8

Park Road was resurfaced at least 5 years ago. I can’t remember exactly when. But I was still working, and I retired in 2014.

Vote Up30Vote Down
Benny C
How long will it take voters before the penny drops? It’s staring us in the face. The cabinet member for transport Ian Ward and his team have been outplayed with worrying ease and have squandered a lot of our money. If failings in team knowledge have been allowed to develop, Ian award is similarly head of the queue in terms of accountability for operational management failures. Ian… Read more »
Vote Up240Vote Down
richardshanklinite

Putting it simply if one only gets 50% of an order you would only pay 50% of the price if it was your own money.If this council has again paid more than they should (brings to mind a Cowes school error?) how can they be replied on to do anything without overpaying and ripping off the good old rates payer?

And the same cancellations elsewhere, Westhill Drive Shanklin the planned works have been cancelled due to unforeseen circumstances.
Yet another letter to be delivered!
And this all costs money.

And now I have been informed that after advertising the fact, doing the letter drop to each house etc in various streets in Cowes, road signs being put in place and have been there for about 2 weeks or more, the jobs have been cancelled!!!

I wouldn’t let Island Roads build a sandcastle in my back garden, there’s no consideration for anyone. No care and attention, empathy and certainly no social responsibility.