Concerns were raised after ten willow trees were cut back in Yaverland last week and an Isle of Wight councillor stated the relevant department knew nothing about it. OnTheWight has the official word. 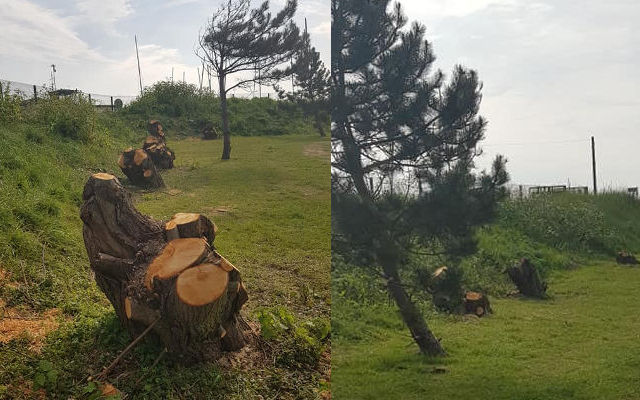 Concern was raised on social media last week, when photos were shared of ten willow trees in the Isle of Wight council’s overspill car park in Yaverland that had been severely cut back.

Sandown’s Isle of Wight councillor Ian Ward posted on Sandown Hub that he’d checked with the relevant department and stated the work had not been authorised or carried out by the council or its contractors.

As Island Roads had also told members of the public they knew nothing about the trees being cut back, OnTheWight got in touch with the council to find out what had happened.

Work agreed by council
A spokesperson for the Isle of Wight council told OnTheWight,

“A hedge of willow trees was recently cut back near Yaverland Car Park. The hedge is on council land and the work was done with the permission of the Isle of Wight Council.

“The work was done by a local contractor who undertook the work at his own expense following an agreement to do this work being made in November 2018. It was done to industry standards and by qualified workers.”

No nests disturbed
The spokesperson added that although the work was carried out during nesting season, no breeding birds were disturbed by the work,

“The trees were checked for active birds’ nests by a competent person before any work took place, and the council can confirm that no nests were found and no breeding birds were disturbed by the work.”

IWC: Would have done to same too anyway
The spokesperson went on to say,

“The hedgerow has been coppiced similarly in the past, and, being made of willow trees, will grow back fully. The hedge needs regular cutting back every ten years or so to stop it from growing into full-sized trees.

“Although the work was undertaken voluntarily by a local person, regular management of this hedge is needed to keep it as a feature in the Yaverland landscape for the benefit of wildlife and people, so the work would have been undertaken by the council in due course in any event.”

Update: Proof of permission
Since publishing the above report, some Islanders have asked to see proof that permission had been granted, OnTheWight asked the Isle of Wight council for a copy of the approval this morning.

A spokesperson for the IWC replied this afternoon,

“The text of the email that gave consent is below, with the personal details redacted.

“This followed a telephone conversation in which the exact details of the work were discussed, but no other record of that conversation was made by us.”

As discussed with the Isle of Wight Council Parks Dept we give full approval for you to cut the hedge back along the stretch of Yaverland Rd/carpark.

Many thanks for this kind offer

The question of whether the hedge on the roadside is what permission was given for has also been raised.

The spokesperson for the IWC told OnTheWight,

“All the work was undertaken with the permission of the council and the whole of the job was agreed in November. It included both works to the roadside hedge and the willow hedge behind.

“The work was done in two stages, with the roadside hedge being done first, and the willow hedge later. The council did not agree a particular timetable for the works and the timing was left to be decided by those undertaking the work.”

There is a brand new house being built directly across the road from this site……which now has glorious, uninterrupted sea views!

Maybe that’s who lopped the trees for free… the new house owner/builder…Makes sense, doesn’t it ?

Vote Up360Vote Down
Benny C
Out of decency Ian Ward should work for free to pay back the island for some of the cost of the mess he has created as a senior decision maker at the Council. This reeks. Working for free? Surely not within the local authority rules? Why? Where’s the Willow timber? Who knows what’s happened here? Certainly not mr Ward. How dismal can this get? Do your job… Read more »
Vote Up43-8Vote Down
sandownhub

Actually in this case Cllr Ward was very helpful to Sandown HUB in trying to find out what had occurred here. It was Council Officers who had not acted competently. It took a week for the spin doctors in the Communications Dept to cobble together their whitewash explanation.

Vote Up11-3Vote Down
Eagle eye
What hedge? The photograph shows mature tree trunks where trees have been cut down. This is not maintenance but total removal of several trees. I would like to know whether the person who cut the trees down was insured and licenced to do so? I would also like to see the ecology study undertaken and the written permission provided by the council’s Tree Officer. If nothing can… Read more »
Vote Up24-2Vote Down
sandownhub

So this was all agreed without anything being put down in writing. How very convenient for IW Council and how very unprofessional. It this is how our County Council operate? We are extremely concerned that this may happen again as there was no provision for protection of the public. Felling trees is an extremely hazardous operation.

Vote Up16-3Vote Down
Benny C
Sandownhub, sorry but Ian Ward has been inadequate. This is local councillor behaviour at its most inept. 1. He allowed a week to go by without any sort of effective control to stop the delay. Or did he? Maybe he asked but whatever, he was ineffective. It’s an email. These take seconds to locate. Not a week. So clearly he isn’t in control of his officers. He… Read more »
Vote Up8-2Vote Down
stubby
alisonjane you are correct, The new house is being built by tree surgeon Richard Payne who cut the trees down free of charge too-bless him the man has a heart of gold.!! Incidentally his wife’s family also own fort spinney and the house to the right of the new home being built. Be Honest who wants nature in the way of your sea view in your new… Read more »
Vote Up60Vote Down