Talks with Homes England, which owns Venture Quays, have been ongoing for months to determine the future of the site after plans to transform it into a luxury waterfront development, with townhouses, a hotel and bars, fell through. 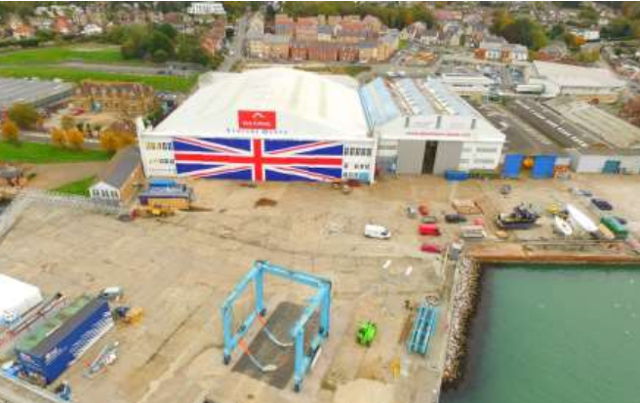 The Isle of Wight Council has agreed a deal for the Ventures Quays site in East Cowes.

The amount was not disclosed.

Talks with Homes England, which owns Venture Quays, have been ongoing for months to determine the future of the site after plans to transform it into a luxury waterfront development, with townhouses, a hotel and bars, fell through.

“Our main objectives are to secure marine jobs at the site for the foreseeable future, but also getting the best value for the council taxpayer.”

“I know the amount of effort and energy that went into the engagement with Homes England on Venture Quays.

“To acknowledge that, to preserve jobs, to actually open that side of East Cowes and put true regeneration into action is good news.”

Knowing how honest and open the Leader of the IW Council has been about the economic success of the Cowes Floating Bridge should we now expect the IW Council to demolish these iconic buildings they now own and build yet more houses to meet Government targets?

I hope the council will instigate a grade listing to ensure the flag is never removed unlike Homes England ( a non-departmental public body) who objected thus leaving this at risk of being removed.

Vote Up240Vote Down
Benny C
Judging by the IOW COUNCILLORS track record on nearly everything related to infrastructure and finance, this is more than odds on to turn out badly. They just don’t possess the basic commercial and judgement skills. Vote Dinosaur Dave Stewart and Ian Ward out before an even bigger mess is landed on our budgets. They are not competent property developers / strategists and they’re not what we want… Read more »
Vote Up130Vote Down
Colin
Perhaps Cllr Whittle should let the council taxpayers judge if this deal is good value or not as most councillors don’t seem to have a clue as to what is good value. So Cllr. Whittle, how much has the council paid? Perhaps the councillor also might like to tell us where the money comes from for the “regeneration fund”. Have the council got a magic money tree… Read more »
Vote Up90Vote Down