Isle of Wight Extinction Rebellions in Westminster: Photos and video 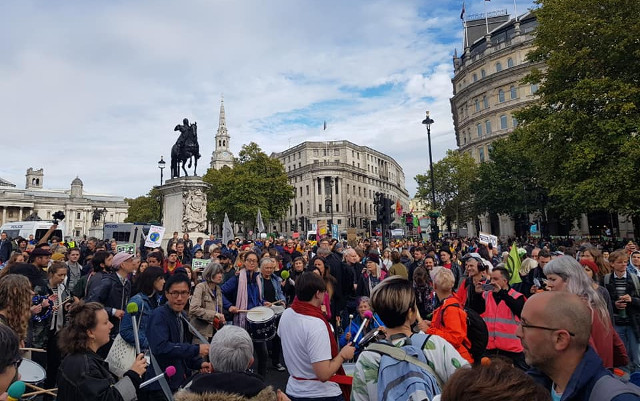 Over two dozen activists from the Isle of Wight Extinction Rebellion group joined tens of thousands of protesters on the streets of London on Monday morning to raise awareness of the climate and ecological crisis and protest for faster action following the government’s declaration of a climate emergency.

Local activist Hollie Fallick is helping in the designated family area on the Mall, which is providing a space for families to join in the fortnight long protest.

“People are sick and tired of the government’s complacency, the world is burning and people are already dying as a result of climate change, while the greed of the west continues to feed this fire. The protests here in London are our way of saying enough is enough, action must be taken, not only by the government but by institutions such as the BBC and big businesses. The time is now.”

Isle of Wight protest
As part of this International Rebellion, Isle of Wight Extinction Rebellion will be holding a solidarity event at Bar 74 on Union Street in Ryde at 2pm on Saturday 12th October.

The event will include live streaming of the protests in London, talks from activists who have attended the first week and live music.

Screen printing of the Extinction Rebellion logo will be available for people who would like to print on their own clothing or flags.

If you would like to help with this event, meet with local protesters in London or for more information please contact [email protected].

8 Comments on "Isle of Wight Extinction Rebellions in Westminster: Photos and video"

Global warming. – The Little Ice Age ended around 1850; since then we have warmed approx. 0.9°C.
As modern Greenlanders still cannot farm barley in open fields, produce beer from it & export it along with honey, butter & cheese to Scandinavia; then we haven’t even warmed up to the level the Vikings enjoyed 700yrs ago.
https://www.eurekalert.org/pub_releases/2019-02/nu-sst020519.php
Listen to the scientists not the politicians
Save energy, don’t waste it.

Vote Up00Vote Down
temperance
No wonder Thomas Cook gone under as i’m sure all those people never fly anywhere for holidays, be Mcdonalds next as I’m sure they are eating a much increased or solely plant based diet and Vodafone and the likes as I’m confident that the masses there won’t be upgrading to the latest phone etc which would contribute to more plastics and waste. I don’t mind going up… Read more »
Vote Up5-6Vote Down
ukdave

Vote Up13-2Vote Down
saveenergy
Hollie Fallick says “the world is burning and people are already dying as a result of climate change” Well, no it isn’t burning & according to the UN disaster database, death due to climate related catastrophes has dropped 96% from 500,000 in 1920 to 20,000 in 2018. Caroline Lucas States “we must leave fossil fuel in the ground” …but she uses transport, healthcare, clothes, megaphone, ALL provided… Read more »
Vote Up2-4Vote Down
bigj

Thank you ‘saveenergy’ for joining the real world.
Mr Brocolli travels alone by taxi too? need I say more?

I’ve been in the real world for a long long time.
I hope some of the ER mob will someday read & understand physics & join me in the real world, instead of believing a bunch of scientifically challenged hypocrites…but I won’t hold my breath.

Save energy, don’t waste it.