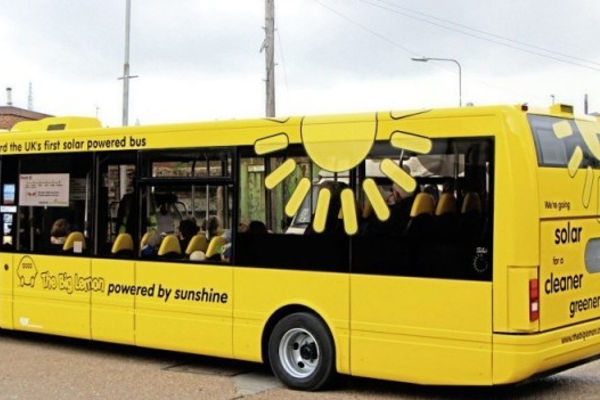 Daniel shares this latest news on behalf of the Isle of Wight Green party. Ed

The Green Party European Parliament election campaign will be travelling around the Island on a solar powered electric bus on the afternoon of next Monday 20th May.

The bus will be decorated with Green Party logos for the occasion.

Entire bus fleet converting to solar
Originally running all its buses on recycled waste cooking oil from local restaurants, The Big Lemon launched the UK’s first solar-powered electric bus in Brighton in 2017 and is now converting its entire bus fleet to electric. Electricity to power the buses is provided by solar panels on the roof of the bus depot.

I hope this will be of interest, not just for Islanders following the elections, but also for public transport advocates and bus enthusiasts.

Details of the solar bus can be found on the Website.

Where and when
The bus is expected to be at LA Bowl car park on Ryde Esplanade after 2pm on Monday and St. James’ Square Newport later that afternoon.

There will be a Green Party election rally at the Riverside Centre at 7pm that evening.

Fair enough regarding 2017. However, the bus had to get there in 2015 and it’s exhaust fumes were dreadful. It’s not a permanent feature of Newport’s St James’ Square.

I suppose it compensates a little for the polluting bus they used at the last 2 general elections.

A stationary Vegan Cafe bus in 2015 and no vehicles at all in 2017 (we had a pop up shop which is now a successful florist) . Selective memory there, Geoff.