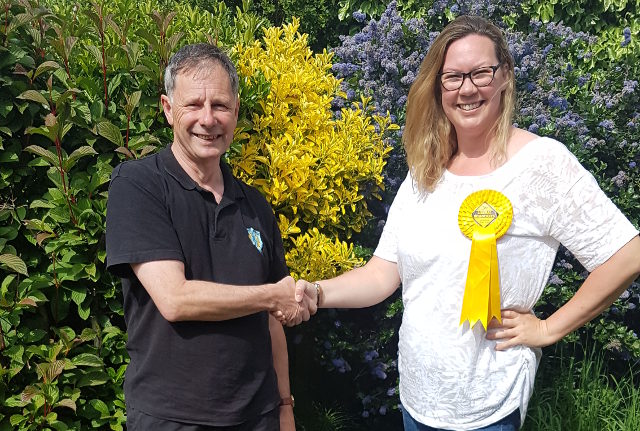 Nick shares this latest news on behalf of the Isle of Wight Liberal Demcrats. Ed

Nick Stuart the Island Chair of the Liberal Democrats welcomes Julie Burridge as the Candidate for the Whippingham and Osborne ward.

Julie is new to politics but brings a wealth of experience as a full time specialist foster carer, former Family Support Manager and parent activist.

Living within 100m of the ward she has children at local schools and has a keen grasp of the local issues from dog mess in the streets, the need for transport and services for new housing developments, and housing provision for the resident population.

“I have spent the last few years disillusioned with politics and wishing Someone would stand and represents my views on the escalating local issues. Having spent a while hoping there was a local Lib Dem candidate I could support the next obvious step was to become that person!

“Now is a time of great political shift and change, and I would like to be part of the process that brings greater community improvements and social unity to our area.

“Becoming Councillor would be an ideal way to use my skill set to support local people having their voice heard and issues resolved.”

‘The Island Liberal Democrats are always focussed on key local issues from the Floating bridge nonsense, Council strategies to concrete the island, and the environmental issues we all face.

“Julie is one of our new members stepping forward to support her community as part of a cohesive centre party.

“The local Liberal Democrats as a united and supportive group hold the Council to account and raise issues the administration struggle to answer. Given the island history and recent fantastic result in local elections the Liberal Democrats offer the main chance to remove the failing Conservative administration, and Julie should be a major part of that process.”