Isle of Wight Misses Out On Isles Fuel Discount

Read and contribute to the 26 readers' comments ↓

The BBC have reported today that a number of islands will see a cut in fuel prices from March 2012. 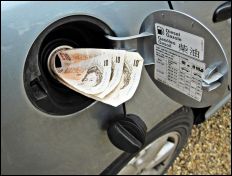 The Treasury has announced a motor fuel duty discount for remote island communities from March 2012.

As anyone on the Isle of Wight who regularly fills ups their car with petrol or diesel will know, unless buying from a supermarket, the prices are considerably higher here than on the mainland.

Unfortunately, the islands that the fuel discount will apply to however, does not include the Isle of Wight.

The islands named by the Treasury are the Inner and Outer Hebrides, the Northern Isles, the islands in the Clyde and the Isles of Scilly. They’ll be enjoying a 5p per litre tax discount from March 2012.

Chief Secretary to the Treasury Danny Alexander said it was “terrific news” for island communities.

We know that Isle of Wight MP, Andrew Turner, has spoken about motor fuel prices in Parliament before, so we’ll be asking what he’ll be doing to address the issue.

Update 14.42: Following comment from Andrew, we added “unless buying from a supermarket” to the third paragraph.

Image: Tax Brackets.org under CC BY 2.0

The Isle of Wight is hardly remote

It might not be remote, but we still have to pay higher than mainland, I saw diesel for 149.9p recently in the south.

didn’t say it wasn’t a rip off….but why should we deserve a discount aimed at remote Islands.

Obviously fuel prices aren’t a problem for some – especially the 11, yes ELEVEN car procession of boy racers who we saw last Friday night on Fairlee Road, doing around 80mph on the wrong side of the road!

Vote Up00Vote Down
biggmarket
To put this into perspective on the Isle of Coll some years ago I was paying at least 15 pence a litre more than on the mainland and there was only one petrol pump on the Island. Bear in mind also that if you go to Tesco or Sainsbury’s on the IOW you can buy fuel at prices comparable with those on the Mainland( and certainly cheaper… Read more »
Vote Up00Vote Down
Andrew

“the prices are considerably higher here than on the mainland.”

I disagree. The supermarkets are just as cheap as they are on the mainland!

Not everyone agrees with supporting supermarkets who force independent competitors out.

The people who run the smaller garages have to earn a living too. Large supermarkets offering cheaper fuel are taking away their business and forcing them out of the market. Soon we’ll only end up with (supermarket) petrol stations in Newport and Ryde.

Vote Up00Vote Down
no name

its the consumers choice to make as to where to buy from. Just dont expect a government discount if you choose to buy from the most expensive outlets available.

Fair point Andrew, so I have updated the article to reflect that, adding “unless buying from a supermarket”

What a load of rubbish. The supermarkets add in there cost of getting the fuel to Island.

Minimum fuel price in the country according to petrolprices.com for unleaded is 127.9 ave is 133.1 Tesco is 136.9 I think and Morrisons 135.9. Local Texaco stations are at 139.9 so not excessive if you have to travel to the supermarkets…. Maybe a bit more research required before changing articles!!!!!

That’s me told then!

Do you mean Their?

Vote Up00Vote Down
The Auditor

Isle of Wight fuel prices are a lot lower than the prices charged on Scottish islands. Diesel hit Â£1.60p a litre last year and unleaded is currently Â£1.48 here.

I think we’re all missing the point.
Which is that,for beauracratic reasons to do with the Common Market the Isle of Wight is classed – by our government – as not an island but ‘an Esturial Anomoly’
Or did I just dream that?

quite correct DOD…but even then, we aren’t remote

Vote Up00Vote Down
witchfinder general
I think you might find that there is a charge for every gallon levied on the landing of it at East Cowes. I read some where just recently that Pace has now taken over what used to be Island Oils which used to operate the jetty and judging from their forecourt prices (which I would not use on principle) they will be milking it for every penny… Read more »
Vote Up00Vote Down
Bob

Pace have owned the East Cowes fuel site for about 3 years… and boycotting the Pace garages hurts the independent retailer far more than Pace petroleum….

Yep my mistake but, I still believe the levy is in place. It was only because I heard something about them in the news a while ago. Hurting the independant or not I am still not paying over the top prices, so my boycott stays in place

If there is such a term as “estuarial anomaly” then Google can’t find it, let alone the classification of the Island as such.

What is your source for this contention?

Vote Up00Vote Down
daft old duffer
My comment was based on a news report some years back that the Government,for some reason of its own, was refusing to apply for the generous grants the Common Market hand out to many European island communities to make up for the more expensive services. The goggledook title ‘Esturial Anomoly’ was invented to explain why the Isle of Wight wasn’t an island despite being surrounded by water.… Read more »
Vote Up00Vote Down
Braveheart

For all those of you who are greatly concerned about the cost of fuel in your area, here is a very good link: http://www.petrolprices.com/

Vote Up00Vote Down
Jay
all im going to do is use the cheapest petrol place around and at the moment seems to be tesco with the points im getting on top. Im sorry if im leaving out any small island fuel places but untill they can give me a good deal they wont get my services. At the end of the day these places are not a charity so why should… Read more »
Vote Up00Vote Down
Sailor Sam

I was in the West Midlands over the weekend and un-leaded at a Tesco station in Kingswinford was 128.9p per litre. I also noted that a day ticket on the buses was Â£3.60.

Dsmith – did you note their number plates and report the incident to the police? No good just moaning, give a statement and do something about it!