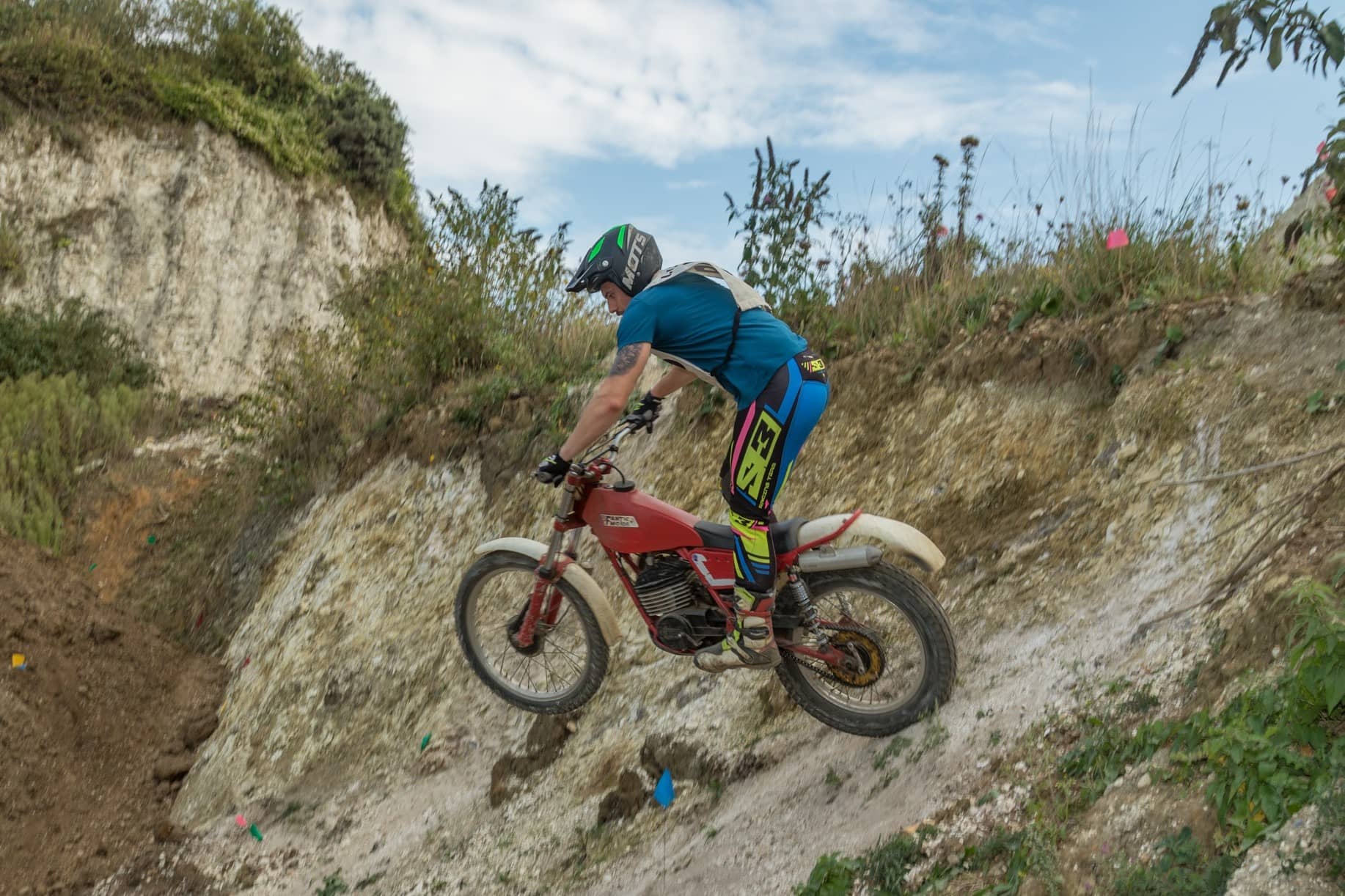 The Isle of Wight Motorcycle Club kicked started the second half of the Club’s 2020 Winter Series Trial Championships on Sunday 20th September at Duxmore Quarry, Downend.

The Club would like to thank Reynold and Reads for allowing us the use of this popular trials venue. The eight-section course was skillfully set by Jono and Ben Read, Scott Milton, Steve Chase and Emile (from Australia).

Regulated by Coronavirus
Thirty-one riders turned out for a bit of escapism from our not so normal lives right now – but even here riders, observers and spectators alike were all reminded about the ‘rule of six’ and the current rules around social distancing. Spectators contact details were recorded to allow for effective ‘track and trace’ follow ups should they ever be needed.

This trial follows the easier mini Summer Series and seemed to take some riders by surprise, resulting in scores that could rival some of crickets top opening batsmen!

British Expert Solo Trials Champion
It was great to see TRS BVM UK rider; Chris Stay attacking his super hard sections with ease. Chris is the current British Expert Solo Trials Champion and we wish him all the very best as he prepares to continue his 2020 Trial 2 campaign at Petertavy, Devon over the weekend of 3rd and 4th October – Good luck Chris.

Stealing the show
However it was George Gosden who stole the show, riding a 40 or so year old, 156cc Fantic twin shock machine as if it were a modern, tricked up and powerful mono shock bike!

He, along with Chris, certainly provided some exceptional spectating throughout the afternoon.

Expert class
In the Club Championships there were just two Expert riders battling for the top spot. Despite some dodgy front brake pads, it was Jack Ayres that took the win from Tom Richards.

At one stage Jack was almost forced to retire as his front wheel kept locking up – but he somehow managed to finish the trial with a convincing margin of 19 marks.

Intermediate class
Meanwhile, course setter; Ben Read won the Intermediate class in some style finishing on 24, the second lowest total of the day and 28 ahead of second place finisher; Adam Morgan with Alan Gosden in third with a total of 70.

The minor placings proved to be a much closer battle, only eight marks separated friendly rivals, Stuart Gummer and Andy Scott-Jackson in second and third places respectively.

Clubman’s class
Phil Chase was out on his own in the Clubman’s but persevered to finish the trial ensuring his maximum ten championship points.

Twin Shock class
Two competitors in the Twin Shock’s and Nick Symes proved that ‘youth and enthusiasm are no match for old age and treachery’ finishing 58 ahead of Jason Elford.

To be fair Nick is an experienced Twin Shock rider and Jason has only recently returned to the sport.

Novice class
The closest contest of the day was provided by Novice riders; Tristan Osborne (winner) and Ben Ashcroft (second)  just a single mark between the two.

Their score sheets were checked three times, just to be certain no mistakes were made whilst compiling the results, following such a close finish. Superb effort by both.

Sam in turn had a good margin of his own, 15 ahead of in third place Kevin Smith.

Youth classes
The Youth classes were headed up by Josh Morris (Youth Expert) ending the day with a total of 73. Looks a big score but when compared with the adults on the B route he’s right there in the mix.

Ollie Elford and Freddie Death made up the Youth Easy class in another super close contest. It was Ollie in only his second trial that took the win by just two marks – excellent effort by both young riders.

Next meet
The Club is due to meet on Sunday 11th October for The Frank Pragnell Cup at Bembridge Down. Andy Scott-Jackson and Stuart Gummer are the Course Setters . Entries can only be made online via the ACU Website.