Everyone is gearing up for the annual Two Day Wight Trials taking place on 27th-28th April. But here’s the report from last weekend. 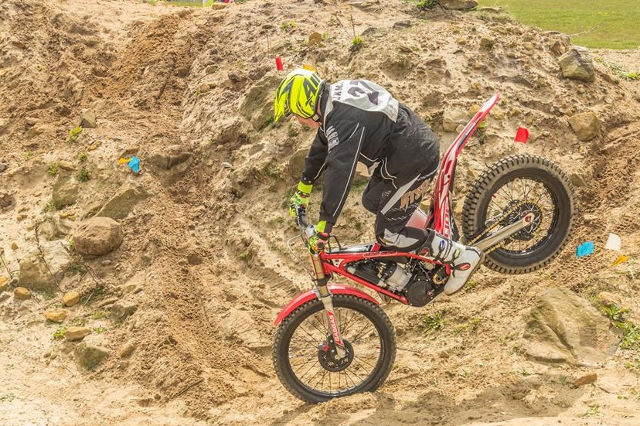 The Isle of Wight Motorcycle Club held the sixth round of the 2019 Winter Series Trials Championship on Sunday 14th April at Haslett Sand Pit, Shorwell, courtesy of Mr Glen Draper.

We would like to thank Glen for welcoming us back once again. Andy Ryall was tasked to set the eight section course – which he did brilliantly. We would also like to thank the six Observers and Club Photographer; Viki Taylor who all gave up their Sunday afternoon, braving that bitterly cold wind, to help ensure a smooth running event.

Special thanks to Geoff Taylor
I would like to say a special thank you to Geoff Taylor who kindly stepped in to sort out all the signing on etc, in my absence. I have heard that he enjoyed it so much he may well be offering to do it more often!

The Club would like to extend a very warm welcome to new member; Mike True, we hope he enjoyed the experience and we look forward to seeing him back out very soon.

The Winter Series is made up of thirteen rounds and to qualify for an award riders must complete a minimum of eight rounds – with the best twelve to count. This trial concludes the first half of the Winter Championship.

Expert and intermediates
Lone Expert competitor; James Stay earned himself maximum points with a solid performance. Loosing just twenty seven marks, nineteen of these on sections one and three.

Tom Richards and Ben Brodie found themselves in a very close battle for the minor places. Tom managed to hold on to the second spot by just three marks, on seventeen with Ben on twenty. Shaun Harris took the fourth place with the upcoming Harvey Grieve in fifth.

Simon Newnham was once again victorious in the Over 50s finishing on seven, the second lowest total of the day. Malcolm Hawkins kept going to claim his seven Championship points.

Dominating Clubman class
Scott Milton continues to dominate the Clubman class with another fine effort, twenty-one ahead of Colin Brodie in second with Phil Chase not many more behind in third.

It was great to see Brian Brockwell returning to trials after a prolonged break. Competing in the Novice’s he was tied with Steve Chase on twenty-nine. Brian was awarded the top spot after notching up 20 cleans compared to Steve’s nineteen – it really doesn’t get any closer than that!

Paul West continues to show improvement and he was rewarded with the third place. Joe Taylor was fourth.

Stewart Freeman seemed to struggle on the loose sand but never the less kept going to earn himself maximum points in the Twin Shock class.

Youth riders
Five Youth competitors headed up with the ever improving Alfie Haydon (Youth Inter). Alfie had a fantastic result ending the day on just fourteen.

Dan Locke had to fight off a determined challenge from Josh Morris to take the spoils in the Youth Novice class, nine marks separating these two. Alfie Gaskin proved to be the clear winner of the Youth Beginner class with Bertie Grieve in second – Excellent effort by all these young riders.

There are 135 confirmed riders to date. All the info can be found on the Club Website.

Around 90 of these are riders travelling from as far as Northern Ireland and Guernsey – would you believe we even have an entry from Australia!

Spectators are very welcome with free entry into each venue. Please follow any instructions issued by Club Officials – who are concerned with everyone’s safety.