The fifth round of the Isle of Wight Motorcycle Club 2019 Trials Championship were held a couple of weeks ago. Read Wayne’s report for details. 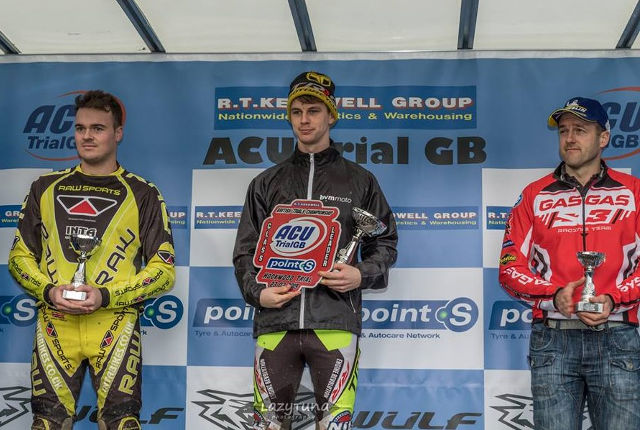 The Isle of Wight Motorcycle Club held the fifth round of the 2019 Trials Championship on Sunday 24th March at Apse Down, Calbourne. We would like to thank Mrs Jane Ball for the kind use of the land. The course was set by Steve Chase, Phil Chase, Ben Brodie and Paul West.

Eight superb sections, something to suit all styles of riding – top effort by them. The Club would also like to thank all eight Observers, it was especially good to see Mike Taylor, well enough, to get involved once again. Club Photographer; Viki Taylor did a brilliant job, as ever, with her take on the trial through the lens – these are all volunteers who give up their time for us and are all vital to the continued success of our sport.

Top spot for Chris Stay
Very many congratulations to Club rider; Chris Stay (pictured at top), who recorded his first British Championship Expert win at Hookwood TC, Surrey on Saturday March 23rd which saw him beat some stiff competition from the established and experienced Ben Morphett (2nd) and Dan Thorpe in third. A perfect start to his 2019 campaign.

This follows his recent National S3 Championship win at Stratford upon Avon a few weeks ago. All his dedication and hard work is now being rewarded with these top results– brilliant riding and we wish him all the best as he practices hard to keep this momentum going.

Fifth round
Rory Stephens displayed some perfection of his own, winning the Intermediate class without losing a single mark, an excellent clean sheet indeed.

Very close behind him was Mark Coombes, who briefly lost his concentration on section seven, missed a flag, to incur a maximum five point penalty – which relegated him into the second spot.

Tom Richards had to battle hard to take the third place, four ahead of Ben Brodie in fourth with Shaun Harris in fifth.

Single expert
James Stay was all alone in the Experts and just needed to finish to take another ten Championship points and although he found section eight somewhat troublesome, he did exactly that.

Simon Newnham took the spoils in the Over 50 (B) class with an impressive performance completing the four laps with a loss of just nine. Malcolm Hawkins finished in second on forty-one losing over half these on sections three and eight.

Clubman class
Meanwhile over in the Clubman class Scott Milton returned to winning ways with a comprehensive cushion of nineteen marks from Colin Brodie.

Phil Chase despite a determined effort was nine more adrift in third.

Novice Class
In the Novice’s it was Steve Chase that took an impressive win (his second consecutive top spot) cleaning all but section three where he lost eight.

Things were much closer for the minor placings, Joe Taylor just managed to stay ahead of Paul west in third. Nick Symes recorded another predictable win in the Twin Shock’s adding to his seasons tally.

It was great to see Stewart Freeman back on the ‘C’ route and considering his lack of ‘bike fitness’ posted an impressive total for a fine second place.

Lone Sportsman
Geoff Taylor was the only Sportsman rider, choosing to take on the ‘C’ route on an unfamiliar two stroke machine – I bet he’s looking forward to getting back on his trusty four stroke Montesa!

Youth riders
Five Youth riders in action headed up by Alfie Haydon in the Youth Inter’s. Alfie did a brilliant job at making it all look so easy, finishing with an superb score of only nineteen. Dan Locke managed to hold off a determined challenge to take the win from fellow Youth Novice rider Josh Morris, just six marks separating these two.

These could be in a photo finish for the Championship towards the end of the year!

This was Bertie’s first ever trial and he did a great job to earn his seven Championship marks but more importantly he seemed to thoroughly enjoy the experience. These young riders represent the future of our Club, the future is looking pretty good at the moment! – Excellent effort by all five young riders.

The full results are available from the Club Website.

Next meet
The popular Wight Two Day Trial is just around the corner, 27th and 28th April. There are 125 confirmed entries with just over 3 weeks to the closing date (19th April) and only 25 places left.

The entry will close before the 19th if the 150 limit is reached sooner. All the details are available in the Forms section of the Website (Supplementary Regulations, Entry Form and Confirmed Rider List).

If you are planning on joining us – then now is probably the time to get you paperwork sent in – or risk being disappointed!