The NMC Memorial trials were a fitting way to remember the former committee member of more than 40 years. 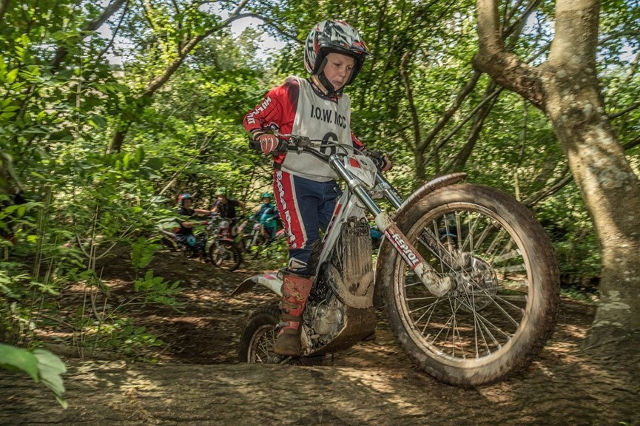 The Isle of Wight Motorcycle Club held a very special trial in memory of Nigel Crouch on Sunday 18th August. Nigel sadly passed away in January 2018. He served on the Club’s Committee for over forty years holding the post of Hon Treasurer for most of those. He was a very popular character who always saw the best in everyone, an inspiration to all – very sadly missed but fondly remembered.

The trial was held at Pagham Farm, Rookley courtesy of A.B. Farms Ltd and the Club would like to thank Michael Brown for his superb hospitality. The day was designed to be a relaxed fun event with a free BBQ to help promote the social side of things. Scott Milton did a superb job with his cooking skills (after completing his 4 laps) making sure that plenty of food was always available throughout the afternoon.

Many thanks to Stewart Freeman, John Townsend, Alan Stay and Geoff Taylor for all their help in plotting the sections, Mark Coombes for pulling the flags, Viki Taylor for her ace photography skills and of course all the Observers – brilliant team effort and just as the Club should be. A big Thank You also to the VIPMCC for the kind loan of the gas powered Burco boiler – everyone needs a cuppa or two or three!

A friendly trial in remembrance
As mentioned, the emphasis was on participation, remembrance and just enjoying the trial together with a more social feel to the afternoon – well I think we certainly managed all four of those key aims.

Of course it was an observed trial and therefore a full set of results were produced, although not too important on this occasion. There were forty-one riders so an excellent turnout for such a small club such as ours.

It was really good to see two of Nigel’s bikes in action – his Montesa 247T and his beloved Greeves Anglian. Both bikes completed the trial intact and despite the mud on section six were probably still cleaner than they’ve been in years!

The Nigel Crouch Awards
Although the focus is not on competition there are a couple of superb Awards that have been sponsored by two of Nigel’s close friends; Dave Rose and Joe Henderson. A stunning Silver Plated Cup called the NMC Memorial Trophy from Dave and something a bit different all the way from Australia, Joe Henderson’s ‘True Spirit’ Award.

It was decided to present the True Spirit Award to Mark Coombes. Mark cleaned up twice. After completing the four laps of eight, on the B route, with a clean sheet he then took himself off (without being asked) to pick up the flags – effectively clearing the sections twice! While the rest of us gathered by the BBQ  –  true spirit indeed!

Nigel was very well known for inspiring and encouraging younger riders and that legacy clearly continues to have an influence. The NMC Memorial Trophy has been awarded jointly to two of the Club’s youth riders. Both of these lads have improved so much this year and decided to step up into the Youth Experts especially for Alfie Haydon and Josh Morris (pictured below), very good effort by these two. Very many congratulations to all three Award winners.

It was great to see Chris Stay and George Gosden in action providing some excellent spectating for all to see in the Elite class. Set by Alan and Geoff, riding the sort of stuff most of us can only ever dream about!

Chris is leading the British Championship Expert class by four points going into the final two rounds due to be held in Scotland in September – on behalf of everyone at the IOWMCC I would like to wish him every success, we have everything crossed for you Chris – you can do it!