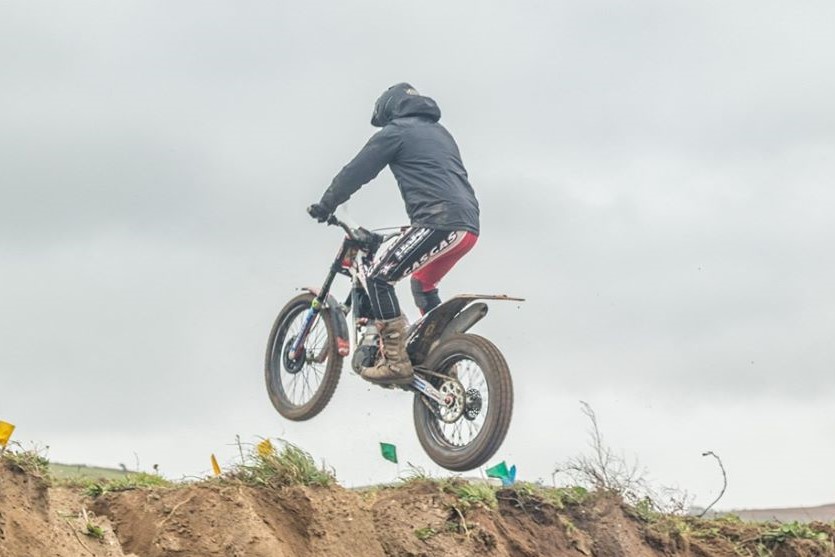 The second round of the Isle of Wight Motorcycle Club’s 2020 Winter Series Trials Championship took place on Sunday 26th January at Haslett Sand Pit in Shorwell. The sand pit is a fantastic trials venue that is rideable even in the wettest of conditions, and we are very grateful to the landowner Mr Glen Draper for welcoming us here.

Despite the bad weather, it was another impressive turnout for the club, with 33 riders signing on to enjoy the eight sections set by Scout Gregory and Tom Richards. The sections made use of the best features that the quarry has to offer that included; hill climbs, drops, rocks, and even a wall ride!

Leading the way
Expert rider Jack Ayres (pictured above) completed the four laps of eight sections with a score of 30, just beating Rob Howard on 34. Rob must be pleased with his performance after a lengthy lay off with injury. Rob’s accomplished background in bicycle trials has certainly transferred over to motorcycle trials, as he made some of the technical A route sections look seemingly effortless.

Tom Richards was just two marks shy of Rob on 36. Tom hasn’t been riding in the Expert class for long, but you wouldn’t know that as he made light work of the sections. Just two riders managed to finish in the Intermediate class, Sonny Gaskin and Scout Gregory. Sonny and Scout regularly enjoy close battles; but it was Sonny who came out on top this time.

Simon Newnham had one of the most impressive rides of the day, proving that age is just a number. Simon scored 48, the lowest total of the day on the B route, finishing 34 marks clear of second placed Stuart Gummer.

Returning rider
A welcome return to trials was made by Scott Milton. Scott kept fellow Clubman riders Colin Brodie, Phil Chase and Geoff Taylor at bay with a score of 57. Colin found some of the sections quite difficult but completed the trial never the less, finishing in second place on a respectable score of 75. Phil Chase finished third, just 3 marks behind on 78 with Geoff Taylor in fourth on 81.

Ryan Munt was the clear winner of the Novice class, posting a score of just 24, beating Marcus Rickard and Paul Kent by some distance. Ryan’s consistent riding in the unpredictable sand was very impressive!

Keeping clean
Mike True (pictured above) was the only rider of the day to go clean. Mike successfully completed the whole trial without making a single dab, in the Adult Beginner class.

Youth riders
Dan Locke had one of the rides of his life on the B route, not only winning the Youth Expert class by a huge 61 mark margin, but also beating experienced adult intermediate riders in the process. Dan’s score of 72 on this route was only bettered by Over 50s rider Simon Newnham.

Incredible performance from the young rider. Josh Morris put in a determined ride to finish in second place.

Another impressive effort came from the young and improving Alfie Gaskin (pictured above). Alfie finished on 70 in the Youth Intermediate class, riding a 50/50 split of both B and C route sections. As Alfie’s confidence on the bike grows, there is no doubt his ability will too – he is definitely one to watch in the future.

Freddie Death (pictured above) is also gaining in confidence with every outing.

In only his third trial he completed the D route (Youth Beginners class) for just 26, cleaning section two all four times – superb riding by all four youth competitors.

Next meet
The club’s next trial will be on Sunday 9th February at 12pm – all the details are to be confirmed and will be available from the Club Website nearer the time.

Meanwhile entries are steadily coming in for the Club’s flagship event, The 2020 Wight Two Day Trial. There is a limit of 150 entries for this popular South Coast trial.

All the details can be found on the Club Website (Forms section). Entries can also be made via the ACU Website.

Report shared by Scout on behalf of Isle of Wight Motorcycle Club. Ed