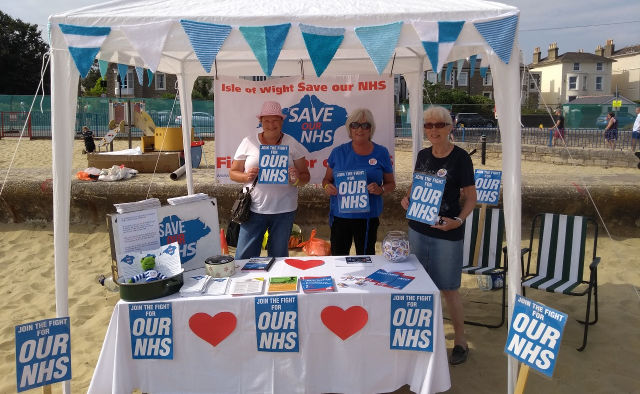 Christine from Isle of Wight Save Our NHS Group shares this latest news. Ed

Isle of Wight NHS supporters say they fully support a national campaign group’s application to the Supreme Court over further funding cuts in the NHS.

Isle of Wight Save our NHS is putting its weight behind 999 Call for the NHS’s appeal to the Supreme Court for a review of a proposed new cost-cutting National Health Service contract, that aims to ‘manage demand’ for health care. 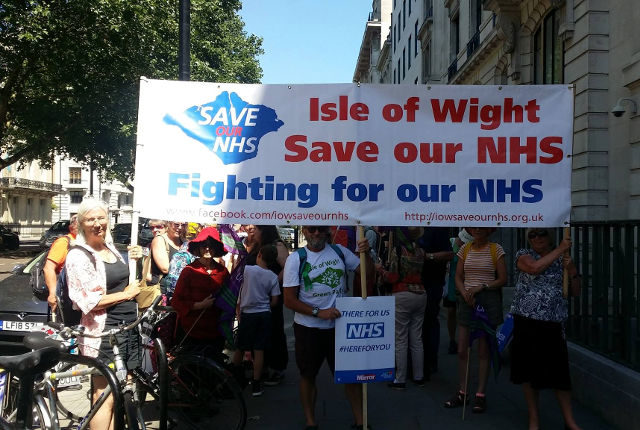 “The Government’s plans to transfer almost all NHS services into local Integrated Care Systems are going to lead to a lot of cuts.

“On the Isle of Wight there are already concerns over services disappearing, clinics closing or actually not functioning any more, waiting times to get GP appointments and treatment, the continuing disappearance of previously statutory services, staffing and the increased reliance on unpaid and underqualified persons to fill the gaps left by sustained under-staffing and the removal of essential services budgets.

“The majority of the British public will be outraged when they find out what’s really going on. I can’t bear to think of our great NHS being destroyed.”

Sam Jeffries, member of IOW Save Our NHS said:

“Patients needing high risk and complex emergency and elective surgery would have to go to Portsmouth and Southampton, this despite a recent a report by the Nuffield Trust (commissioned by NHS England) suggesting that acute services in geographically isolated locations such as the Isle of Wight), should be retained.

“Now the Isle of Wight Council Cabinet has proposed cutting a scheme that gives free travel to residents who have to attend mainland hospitals for radiotherapy, chemotherapy and kidney dialysis.

“This time, the public have fought back with a petition saying this would amount to a death sentence for patients who can’t afford to travel. The petition has been accepted by the Council and Cabinet will make its final decision in March.

“We won’t sit back and let our access to NHS care be taken away because of cuts to funding.”

Claim of no evidence
NHS England told the Judges in the Court of Appeal that the Integrated Care Provider contract would enable innovation and integration – implying this would cut costs without restricting or denying patients’ access to treatments.

The Judges did not question NHS England’s claim, but campaigners say there is no real evidence to support it.

Sharon McNamara, another member of IOW Save our NHS added,

“The Judges should come and find out what’s really happening here. The Isle of Wight CCG and Council are already implementing new cost-cutting Accountable / Integrated Care models, but where’s the evidence that this is improving the quality of NHS services – despite the best efforts of NHS frontline staff? We simply can’t see any.”

Crowdfunded challenge
Over 2,000 members of the public have crowdfunded the 999 Call for the NHS legal challenge, including residents from the Isle of Wight.

There is widespread support for the application to take it to the Supreme Court so that the key issues can be properly considered.

newest oldest most voted
Alternative Perspective
This is just part of the Conservative Parties grand plan. Their sole aim is to strip the UK of its assets and pass the remaining responsibilities of government that are in public ownership into private hands. The very people who hold offices of state are handing over what should be the state’s responsibility to private corporations. The prize is a hollowed out UK with the population in… Read more »
Vote Up13-3Vote Down
elemental
We urgently need the Reinstatement of National Health Services Act to be passed in Parliament, supported by cross-party MP’S & us NHService Users because government’s Duty of Care to public health was abolished in 2012. The deliberately secretive & “stealthful” way in which successive governments, aided by complicit councils, have axed our services, then asset-stripped & sold off the publically-owned premises, is a national scandal & a… Read more »
Vote Up30Vote Down