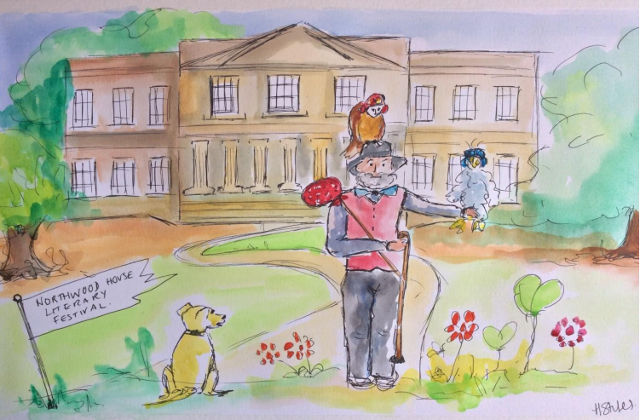 Papa Owl and Rocket the Dog’s Big Flying Adventure is the first of a planned series of books by Isle of Wight’s newest Publishing House – Papa Owl Publishing. It will be launched at the Isle of Wight Literary Festival on Sunday 16th October.

Papa Owl lives on Sandy Island with his dog Rocket and his two owl friends, Barney and Snowdrop. He is an inventor and granddad to sisters, Fifi and Flossie, who want to be inventors when they grow up. In his first adventure, Papa Owl builds a flying machine that flies silently like an owl.

Michael is a lead spokesperson on mental health on the Island, a senior executive within a national mental health charity, a Ryde Town Councillor, an advocate of local green issues and a granddad.

Helen is a social worker, local artist and mum.

Celebrating the magic of life
Both Michael and Helen have spent many years working with children and families and identified the need for children’s books that celebrate the magic of life pre-dating the computer age where children enjoyed making things out of a cardboard box, pieces of string, old newspapers and wall-paper paste.

A national issue
This is important at a time where children are getting more anxious and children’s mental health is a major national issue.

The book is part of the Island’s Age Friendly Island Campaign (this campaign is funded by the National Lottery through the BIG Lottery Fund) to make children and parents aware of how the older generation has much to offer and how emotional resilience is about relationships and social interaction.

“Papa Owl was inspired by my own dad, who died last year in Ryde. I wanted to find a way to commemorate his memory but connect with my own life. My dad and I both were passionate about what world we were leaving behind to our children and grandchildren and felt that more and more generations were becoming separated.

“Papa Owl World is based on fictional Sandy Island and Papa Owl brings people together to share ideas, help others, be one with nature and more importantly invent.”

In the book, Papa Owl tells his granddaughters, Fifi and Flossie about how everything from mobiles to play stations were all invented. Together they make an owl flying machine out of recycled household goods.

The Owl Man
Michael’s father was a leading pioneer and inventor and was nicknamed the Owl Man. One of the UK’s leading aeronautical scientists, Professor Geoffrey Lilley OBE, died aged 95. He played a big part of making the Solent one of the top international home and World leaders of astronautics and aeronautics in the 20th Century.

His career spanned a 75 year old aviation journey from the Vickers Wellington to Concorde, and latterly to the implications for modern flight of the silent wing flapping of the owl. He was known to keep Owls in his freezer, which had been sent to him from Owl Sanctuaries when they died of natural causes, so he could study the feathers. He was also a world lead on human powered flight.

The Papa Owl wing
Michael is a member of the Isle of Wight Aviation Museum steering group which is planning the development of the IW Aviation Museum at Sandown Airport.

The Owl Man’s archive and story will be held in the future museum in a Papa Owl wing.

“I had never really ever painted and after a very sad family loss, I was moved to draw and paint. Michael saw may work and we started to talk and he told me of the Papa Owl story which he had told at this dad’s memorial.

“A year’s collaboration has led to our first book and friendship between our families. We both love the Island and its people.

“We have a big vision one day that there will be Papa Owl World theme park and inventor’s kits. Michael and I were Blue Peter children and making things out of old newspapers.”

The official Papa Owl Website will be launching on 14th October.

How do I get a copy of the book about Pappa Owl and Rocket the Dog’s big flying adventure for my grandson ? I befriended Prof Lilley when he lived in Sway and went to concerts with him.