Isle of Wight rambler walks away with national volunteer award

Congratulations to David Howarth who has raised more than £70,000 in his six years as chair of the Isle of Wight branch of Ramblers. 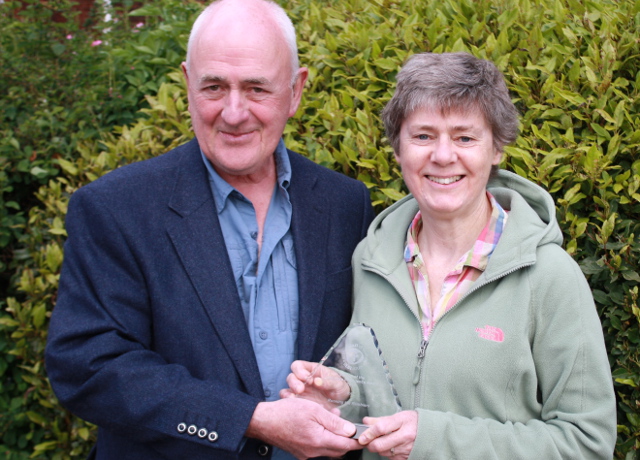 This in from the Isle of Wight Ramblers. Ed

David Howarth from the Isle of Wight recently (Saturday 6 June) received a national award from the Ramblers during this year’s Volunteers’ Week.

President’s Volunteer Award
In his six years as area chair of the Isle of Wight Ramblers, David raised more than £70,000 in funding to improve access along stretches of four different footpaths.

In recognition of his work, David scooped the Running the Ramblers Award at the Ramblers President’s Volunteer Awards.

The finalists for the award were shortlisted by the Ramblers president, Kate Ashbrook, and walking enthusiasts across the country voted for the winner.

“We congratulate David on his award. He has dedicated years to protecting and improving access to the outdoors.

“Thanks to his management and fundraising expertise, the Isle of Wight Ramblers has grown into one of the most exemplary groups across our network, having recently received the Queen’s Award for Voluntary Service.

“Our Ramblers volunteers are vital to our success. Their daily efforts underpin our work in protecting people’s rights to enjoy the freedom of the outdoors. The annual Volunteers’ Week is a timely celebration of the hard work and dedication of millions of volunteers, and this year I’m proud to be able to convey our thanks through the President’s Volunteer Awards as well.”

“I am proud of the achievements of Isle of Wight Ramblers and honoured to have received this award from our President. Kate has been a huge inspiration to our Island members.”

Donate a Gate
David’s initiatives have included the Donate a Gate scheme, which raised £49,000 in five years to finance new footpath gates on the Island.

In 2011, he led the Isle of Wight Ramblers team in receiving the prestigious Queen’s Award for Voluntary Service from the Earl of Wessex at Carisbrooke Castle.

Image: David Howarth, area chair of the Isle of Wight Ramblers, receives the Running the Ramblers Award from Kate Ashbrook, president of the Ramblers.

Congratulations David at last found a way of contacting you. Stuart Harvey