Retailers say they have not been consulted and are up in arms about the road closure. 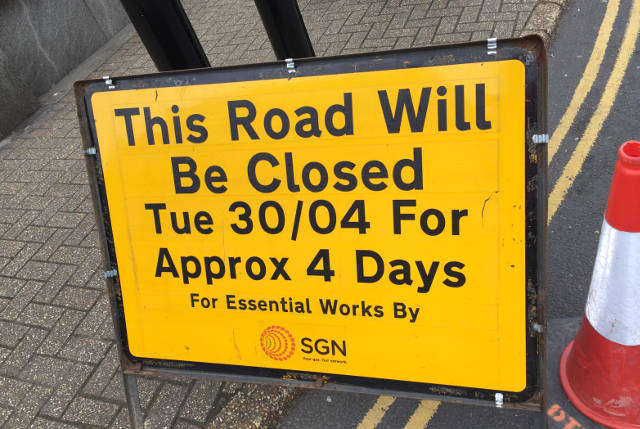 Retailers in Shanklin have shared their anger over a road closure planned by Southern Gas Networks (SGN).

Regent Street – the main shopping hub of  Shanklin – is due to close to vehicles for four days from Tuesday 30th April.

Retailers say there has been no consultation with them and that the first they, and residents, knew about the road closure was when a sign was placed at the top of the road. They say there was no letter, discussion or consultation from SGN.

They go on to claim,

Fury of retailers
OnTheWight has been told that all retailers in Regent Street were furious yesterday (Friday), asking why this work could not be completed out of hours, like many road resurfacing projects have been completed. Or why the work could not be done 24 hours a day to complete the task faster.

Retailers say that responding to complaints, SGN sent someone out on Friday, “but the actual surveyor who organised the plan was on holiday and was unable to answer questions”.

Call for free parking
Retailers are approaching the Isle of Wight Council on Monday to ask for free parking by suspending the charges in the local car park to help retailers – in Landguard Road, Shanklin

They say they’ve not not had any help from IW Council over this matter – with no warning or assistance.

“High Streets are struggling nationally, and local shops need all the help we can get.

“This is a really disappointing way of operating from a large company. Shanklin retailers will really suffer.”

“It was disappointing there was no advanced notice. We will be asking IW Council to suspend car parking charges in Landguard Road car park from Tuesday to support us.”

I’m afraid it’s par for the course with road management on the Island.

I’ve lost count of the number of times Island Roads have shut my business off without warning or collaboration – no body dismisses the need for road maintenance, but they are a civic asset and it would be appropriate if the Highways Authority and utilities acted accordingly.

Vote Up38-5Vote Down
micksey009
Accountability seems non-existent in most of today’s large organisations. Customer complaints are a damned nuisance. Having spent much of my career training folk in the importance of customer care I despair. Heads no longer roll, Ministers no longer resign. There’s a whole new ‘ not my fault ‘ culture that’s spread through all sectors of society. The root cause starts at home and in school. Lack of… Read more »
Vote Up280Vote Down