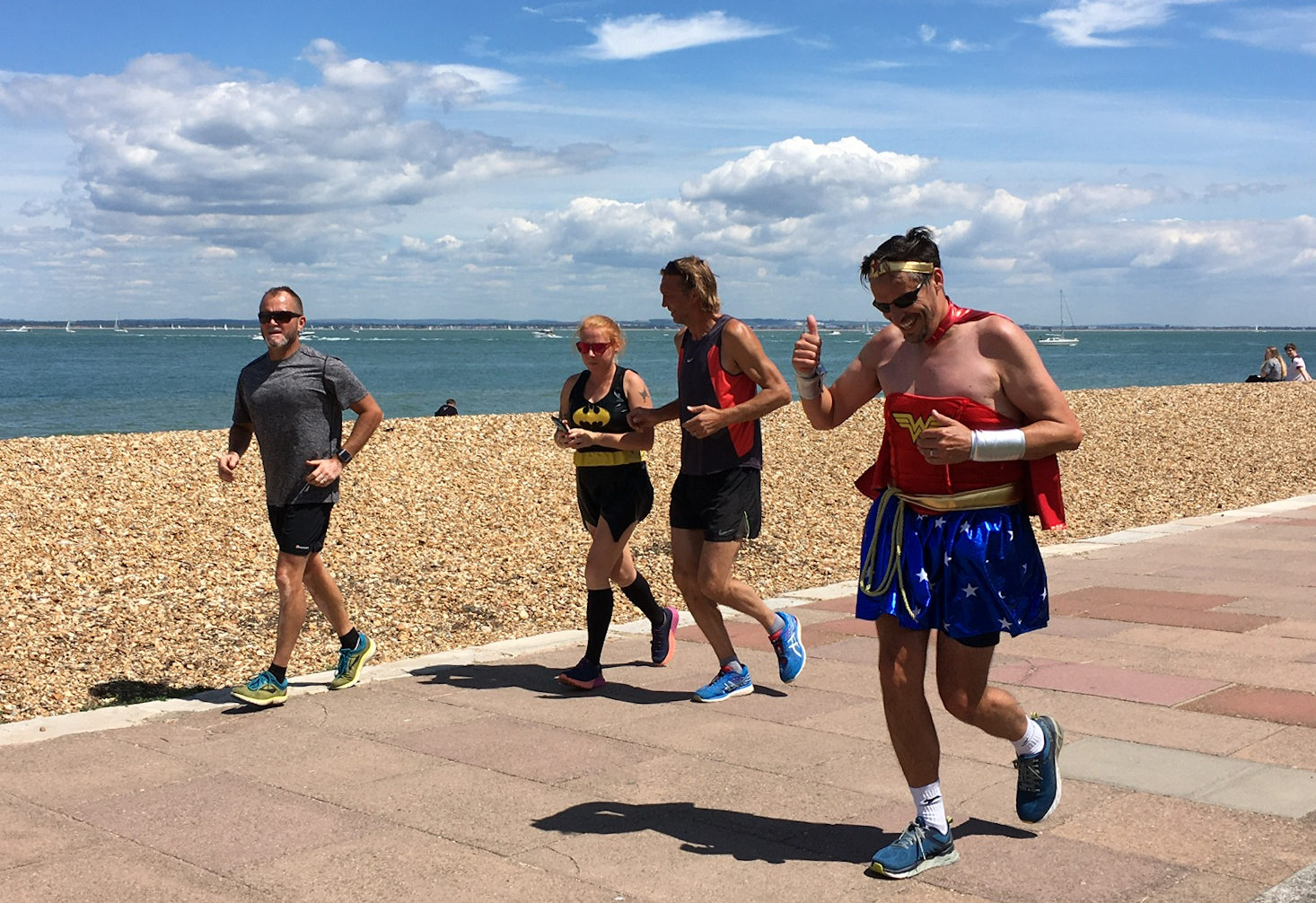 In the run up to his 50th birthday in November, Neil set himself the challenge of running 50 marathons – it’s been pretty much one a week since late last year and Sunday’s drew a bit more attention than usual.

Less than wonderful marathon
This was due to the fact Neil ran the a 26.5mile course (four laps through Cowes and Gurnard) dressed as the DC Comics superhero, Wonder Woman.

This marathon was a really tough one for Neil though, he was sporting a back injury from his 38th marathon and it was one of the hottest days of the years.

Insanely difficult last lap
For anyone seeing Neil struggle on Sunday, he explains below how hard the last lap was.

From the description he gives, it’s amazing to think that he made it back, but his effort was nothing short of heroic.

“The last six miles of any marathon is always the worst. Today was probably the worst of all of them so far. I don’t know what it was but I was in a terrible state from the moment we started the last lap. I can only assume it was down to the heat of the day that made it so hard.

“As I ran along the parade past the group of supporters to start that final lap I could feel the tingling in my hands and legs that I’ve felt many times before as the blood moved to essential organs. When this happens, I’m generally done for. I was spinning out so badly.

“At one point along Rew Street, I collapsed in a heap on the floor, I was so dizzy that I literally couldn’t see.

“I managed to get back up and stagger on for a bit longer. I felt quite self-conscious and a bit of a let down to the friends running with me. Rob, Jodie, Pete and Mark Bailey (for a second lap).

“They were all great. I think without them there I would have quit, but their encouragement kept me going. Pete even dashed off to go and get a gel from home for me. He probably liked the chance to have a proper run.

“I was dreading the prospect of going up Pallance on that last lap, even walking was tough, my head was spinning so badly. Yet again, I collapsed in a heap on the side of the road and was sick. I’m positive the real Wonder Woman wouldn’t do this!

“Strangely I felt a tiny bit better after that and Pete had made it back with an electrolyte drink for me. This pepped me up just enough to continue. The Rudd pit stop was there with a hose to refresh me at the top of Pallance and then from there it was just a case of getting back down to the Green where I could finally collapse.”

Support throughout
Joining Neil at the start of the marathon was Wayne Cranwell, dressed in a Ninja Turtle outfit, Gemma Swain joined in the first lap, Simon Lilly arrived on the Red Jet ferry and ran two laps.

“My recollection thereafter of who joined us at what point is a bit vague, but I had company for every lap. Beverley-Jo Fisher, Guy Boorman, Mark Bailey, and also Wayne’s wife, Nicola, ran for a bit with their son.

“Rob Hunter breezed along three of the laps with me, including the terrible last lap. We were also joined by Peter and Jodie Willmot on the last lap.”

Along the route Neil also had support from Simon Chambers, who was there at each lap on Solent View Road with water and ice cubes. At the top of Pallance Road, Jo and Aaron Rudd had set up a water station.

Show your support
Neil has been raising money for the mental health charity Mind throughout the challenge and had hoped to raise £1,500 – the total at the moment is around £2,500, but with ten more marathons still to run in 17 weeks, we’re sure that total will be steadily rising. It’s a great cause and his efforts week after week have been incredible.

If you want to show your support pop over to Neil’s Just Giving Page to help raise more money for Mind.

Neil has been blogging about the challenge throughout, and you can read his latest post here.