Scouting on the Isle of Wight has risen above the national twice! Call for more Leaders to get involved.

Many thanks to Malcolm for sharing this news from Isle of Wight Scouting. In his own words. Ed 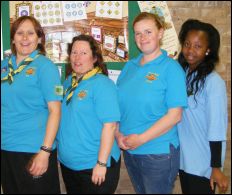 With a membership of 1,414 Scouts, Isle of Wight Scouting has its’ highest membership level this century. This 6.7% increase, more than twice the national average, is the highest in the South East of England.

This impressive surge in membership – there are now 525,327 Scouts in the UK – has helped cement Scouting’s position as the largest co-educational youth movement in the country, helping even more young people and adults join in the adventure.

Both nationally and on the Island, the biggest area of growth is in the 15-18 year old Explorer Scout Section. And 77 of the 104 Explorers on the Island have chosen to sign up to the Young Leaders’ Scheme, making a commitment to work as Leaders in Beaver and Cub Sections.

Valuable training for Young Leaders
Young Leaders are offered full training, helping them to develop and grow as individuals while aiding the personal development of other young people. Furthermore, the skills involved in leadership – such as communication and time planning – can be transferred to other environments like the workplace.

We offer an environment for young people to achieve their full potential as individuals and responsible citizens. These principles are reflected in the range of community work that Scout Groups undertake week in-week out.

The stats
A report unveiled last year demonstrates the positive impact of Scouting for young people:

Great to see the numbers rise
Bear Grylls, Chief Scout, said, “It is so great to see Scout numbers rising on the Isle of Wight and a big reason for this is the number of teenagers joining the adventure. More and more young people are realising that Scouting offers them so much -whether it’s the opportunity to go on a big international adventure or the chance to learn and hone vital life skills.

“I am also excited to see that so many young people on the Isle of Wight have committed their time to give back as Young Leaders. Leadership in Scouting offers so many personal rewards and practical benefits, and so many employers nowadays recognise these as being both empowering and work/life-enhancing. There truly is something for everyone in the world of Scouting.”

We’ve made it easier for adults to volunteer as much or as little time as they can spare – a few hours a week as a leader or a few hours a month as a helper or active supporter. It’s how best we change our society: lots of people doing a little bit at a time.

We give full leadership training, training that will look good on any cv.

But be prepared – you may get to like the Team Spirit, the Scouting Adventure “¦. and the FUN!

Would all these scouts like to add Ryde District Heritage Centre to their list of possible investiture venues? Please get in touch via the Heritage Centre – 01983 717435, or email [email protected]