Thanks to Malcolm Cox from the Isle of Wight Scouts for sending this into VB, showing the good work done by Island volunteers, including the Girl Guides. Ed 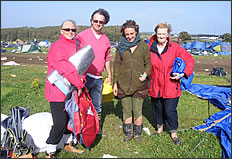 Isle of Wight Scouts are really pleased that our post-Bestival Tent Salvage project has been integrated into the Bestival site management framework in which all waste disposal and recycling is now dealt with as part of a single site waste management program.

In 2007 IW Scouting Active Support Project coordinator Malcolm Cox and Bestival Curator Rob da Bank arranged for Isle of Wight Scout and Guide leaders and helpers to run the first ever salvage of tents and camping equipment left behind after Bestival.

Producing free equipment for young people
A good cleanup and a check over, and this equipment is all ready for our young people to use! The project worked so well that Scout HQ promoted it and now Scout groups salvage equipment after most of the major festivals across the country.

This year Bestival set up a hub-based camping infrastructure run by their own Green Team. who worked hard to promote recycling and reuse of camping equipment.

But in our throwaway society no amount of coaxing, enticing or downright bribery from the 40 strong Green team could persuade everyone to take their tents, sleeping bags and other camping equipment home with them. However the Green Team can be proud that on Monday afternoon, after the campers had left, the camping fields were the cleanest we have ever seen.

Over the years, the Scouting Active Support Project Team have developed a set of Health and Safety guidelines to minimise the risks to our salvage teams, and as the salvage is a Scouting activity, we are fully insured!

In another new step this year, Bestival encouraged other organisations to come and help with the salvage. As well as organising the work of our Scout and Guide teams, we coordinated the work of other salvage teams including South Wight Housing Association who were collecting camping equipment for young people living in their properties.

Independent councillors help out
This year some VIP guests joined our salvage team. IW Councillor Ian Stevens persuaded a number of his colleagues to come with him to see how we all work with the Bestival team to recycle waste and reduce the amount of unessential landfill.

Great to see initiatives like this. ‘Other’ festivals should take note!

Bestival goers should have to clean up and take their tents home , it is not a rubbish dumping site

Vote Up00Vote Down
John
I agree with Victoria-these loutish tent dumpers should take their tents home with them for re-use. Why should it be up to volunteers to make use of them after the event? We are encouraging these people to dump the tents it appears.Not exactly responsible behaviour by the tent dumpers and the fact they appear to crap or vomit in their tents is not appealing!(alluded to in piece… Read more »
Vote Up00Vote Down