What started as an ambitious plan to save just one locomotive and a few carriages from destruction has grown into an initiative that is now a major Island attraction enjoyed by over 100,000 visitors each year. 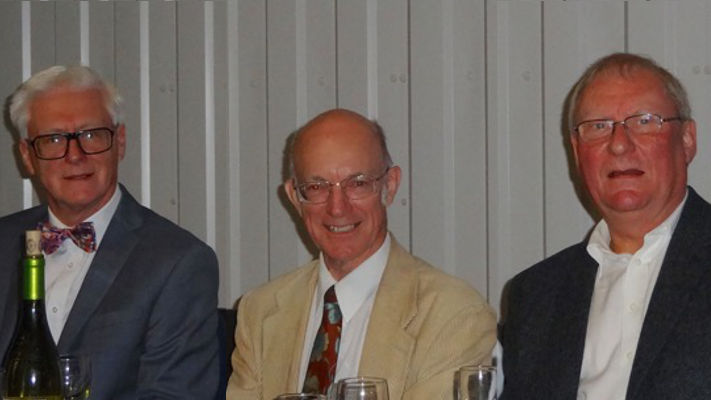 Abigail shares this latest news from the Isle of Wight Steam Railway. Ed

Three original members of the Isle of Wight Steam Railway attended a dinner on Saturday evening at Havenstreet to mark the 50th anniversary of the heritage railway’s foundation.

With the last Isle of Wight steam train service coming to an end in 1966, four like-minded school boy railway enthusiasts got together, the youngest being aged just 12 years old.

Ambitious plans
They hatched an ambitious plan was to save from destruction just one locomotive and a few carriages. An approach was made to British Rail and a deal was reached to purchase the Adams 02 Class locomotive ‘Calbourne’ for £900, at the time a large sum of money.

Determination and a degree of good luck saw the boys raise the money and acquire what is now the Isle of Wight Steam Railway’s flagship locomotive. The original ambition did not run as far as to restore and operate the locomotive, but over 50 years this enterprise and initiative grew into what is now a major Island attraction enjoyed by over 100,000 visitors each year.

Following the ride the carriages shunted into the Train Story Discovery Centre where the guests disembarked and stepped onto the platform for the celebration and a three course dinner. Carriages and wagons restored to pristine condition formed a unique backdrop to the evening.

The Railway’s Chairman, Steve Oates welcomed and thanked Ron Strutt, Iain Whitlam and David Perry for what they started 50 years ago

The ‘Calbourne’ along with her colleagues took me to school and back every day. It’s always a thrill to see her in action and I’m grateful to the IWSR for saving her.

Living in Ryde and attending Sandown Grammar School was what got me started as an Island Railway Enthusiast. Enjoyed two rides behind ‘Calbourne’ this summer. Thank you

If by any chance you have not been to this attraction you should put it on your hit list. What has been achieved by a dedicated team of volunteers is nothing short of amazing.
Why not become a member – it’s not expensive and you will receive quarterly magazines and vouchers for train rides.