Isle of Wight Studio Glass to rise from the ashes 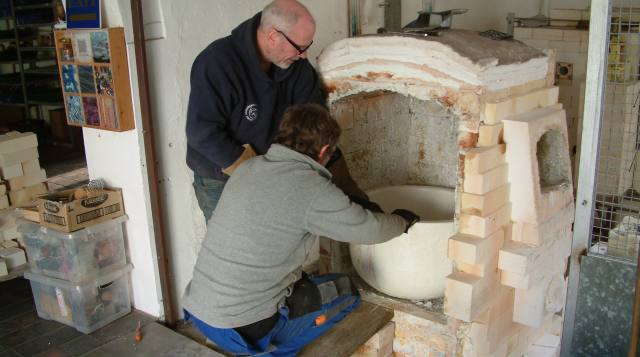 After it was announced that Isle of Wight Studio Glass Ltd would be going into liquidation at the beginning of the year, good news arrives for all those involved with Isle of Wight Glass.

The Studio was founded by the late Michael Harris and his wife Elizabeth back in the early 1970s and until January was led by his son, Timothy.

On hearing of the liquidation, Michael’s younger brother, Richard Harris, has stepped forward to acquire the assets and keep the business in the family.

New company, new location
As those who have visited the Studio will know, is currently nestled in the Undercliff at St Lawrence.

However, new premises is being sought, so in the meantime, all the equipment (much of it very heavy and cumbersome) is slowly being moved out of the St Lawrence premises and placed in storage.

New company, new designs
We also hear that Isle of Wight glass will use the opportunity to take the designs in a new direction.

Timothy says: “I feel that the new configuration will allow me the freedom and opportunity to pay homage to what was, but also to develop in exciting new creative directions.”

“A privilege to have this opportunity”
Richard Harris says, “Although I know very little about glass, as a child I watched my elder brother’s career unfold from his art school days. I have a great affection and reverence for the medium of glass and for the extraordinary gift that Michael had, a gift that has passed to each of his sons Timothy and Jonathan.

“It is a privilege to have this opportunity to become involved in the family glassmaking tradition. As a youngster, even though I sometimes wanted to, I knew that I could never become an artist like my brother – I simply couldn’t compete. So I had to do something completely different and became a doctor! Although I am now retired from medicine, hopefully if I can run chunks of a hospital I can manage a glass studio, but time will tell!”

Captured on film
Those who follow My Isle of Wight might have seen the video feature fronted by Simon and produced by the MyIW team last year.

The 15 minute video feature explores the history of Isle of Wight Glass studio and sees Simon try his hand at making a glass paperweight.

Best of luck to the new incarnation of Isle of Wight Studio Glass.

Fantastic news! I wish Richard every success and I hope that he finds premises in Ventnor so that he can keep this iconic business here.

WE all wish IOW Glass every success

Good to have some positive news. It was always an interesting place to visit with some fabulous glass.

Bravo Richard and Timothy, I wish you the very best for this next step in the Isle of Wight Studio Glass Story.

Where can I buy some more?

Vote Up00Vote Down
Ron Wheeler
Thanks for this positive report. There are several of us closely involved with Tim and the relocation and setting up of his new studio. I have been proud to be associated with the Studio since his fathers days, from 1980 in fact, as one of Mike’s first agents and almost without a break since. We promote the studio and Tim’s work all over the UK at antique… Read more »
Vote Up00Vote Down
kim jarvis

i visited studio glass today on the isle of wight, was shocked to see the sign ceased trading. i have been collecting mdina and isle of wight glass for years. please send me details of yr new premises as soon as u get them.

Kim – unless there has been a last minute change, IOW Glass are setting up at Arreton Old Village (Barnes). Mind you, when I last went there in August, they did mention a September opening date – so don’t know if this is delayed – I would imagine there to be a lot of setting up to be done.

Great news, love your work Tim and always enjoy a chat when we visit.
Your piece takes a pride place above our fireplace and look forward to coming and see you soon and adding to our collection.
We’ll done Richard for keeping good things going
Andy