Isle of Wight Vicar stepped up to the penny farthing challenge

To raise awareness for September’s Ride and Stride for Churches event, Isle of Wight’s Rev Clive Todd took to a penny farthing in Oxford at the weekend. 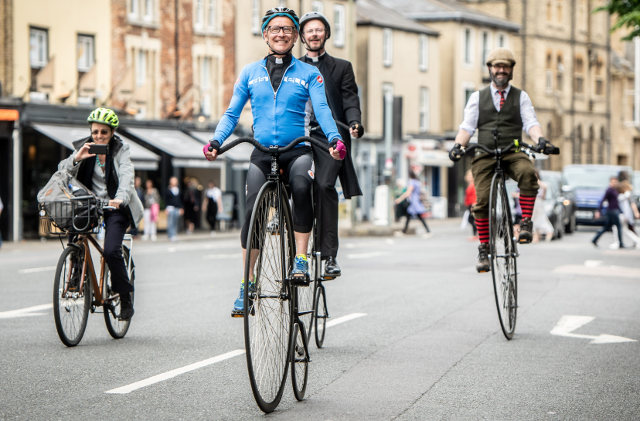 Gaye Spencer shares this latest news on behalf of Ride and Stride for Churches. Ed

The Rev Clive Todd from the Isle of Wight, together with Vicars from all over the country, descended on Oxford last week as part of an initiative by Hampshire and the Islands Historic Churches Trust (HIHCT), a registered charity which raises funds for grants and loans towards the upkeep of 900 historic church buildings representing many different Christian Churches.

Clive and the other vicars’ goal was to learn how to ride penny farthings to promote the work of the County Historic Churches Trusts nationwide to preserve our church heritage and history for future generations.

Raising awareness for Ride and Stride
Clive and other clergymen and women rode through the streets of Oxford in their clerical collars and other less usual gear to raise awareness of Ride and Stride for Churches, the annual fundraiser that sees sponsored members of the public walk, cycle, or use other means of transport, between churches.

The Clergy received instruction from experts from the Penny Farthing Club in the playground of a primary school, before cycling off into the city centre.

Clerical collar and lycra
One of the more accomplished cyclists, Isle of Wight’s Clive Todd, certainly captured the spirit of this unusual if not quirky occasion, wearing the traditional clerical collar and modern cycling gear in bright blue!

“It was tricky getting on and off the bike, but I soon got the hang of it. It clearly caused a sensation as shoppers and onlookers were reaching for cameras and phones to take photos of me.”

The event passed off with plenty of wobbling and nervous laughter, but no serious injuries or worse, blasphemy.

She added that Ride and Stride is not just for people who go to church but for individuals and families who enjoy getting out and about, visiting our historic churches along the way and who want to do something that is both fun and worthwhile.

Team Rector
In April 2018 Clive was appointed to be the Team Rector of the West Wight Emerging Mission Community and Priest with specific responsibility for eight Parishes on the Island. He is a keen athlete engaging in many different sports and has cycled for Ride and Stride previously.

Clive and his team, who cycled for St. Michael’s Church Shalfleet, IOW, raising £3,100, recently won a certificate for the church raising the most money in 2018 at the Trust’s AGM in May in Winchester Cathedral.

Up to 400 churches will be open, details on the Website and this year we hope to raise over £70,000 for the upkeep and modernisation of churches from all denominations from participant’s sponsorship.

Half the money raised by a participant can go towards their church, if nominated.