The popular Isle of Wight Walking Festival returns to the Island in 2017 as IsleWalk17 – rescued by Visit Isle of Wight with the help of the ferry companies, there will be walks of all sorts to enjoy over two weeks. 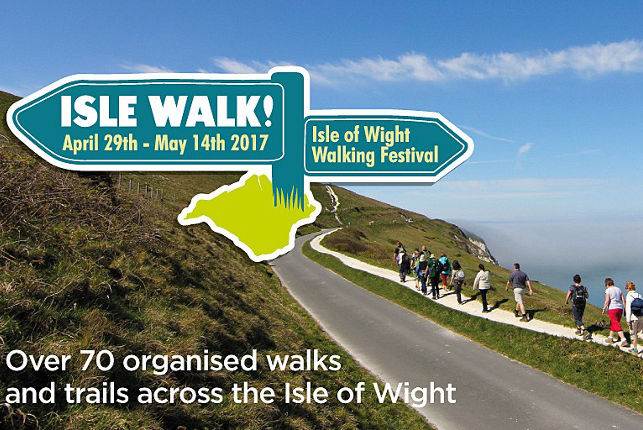 The popular Isle of Wight Walking Festival returns from April 29 to May 14 as IsleWalk17, with local and visiting walkers of all ages and abilities invited to set-off across the Island on a wide choice of themed walks, which can be found on the Visit Isle of Wight website.

It remains one of the UK’s biggest walking festivals, and allows participants to follow in the footsteps of everyone from Alfred Lord Tennyson to Jimi Hendrix; on the trail of everything from dinosaurs to the prefect dawn chorus; and heading everywhere from Queen Victoria’s Osborne House to a non-stop walk around the entire 72-miles coastal path in 24 hours.

The full programme of walks, can be found on the Website. They feature some old favourites, as well as some new walks.

‘England in Miniature’
Over half of the Island is recognised as an AONB. And with its 60-miles of dramatic Heritage Coastline and more than 500-miles of well-maintained and signposted footpaths the Island has long been recognised as a walker’s paradise.

Walkers participating in IsleWalk17 will get up close and personal with the best of the Island’s stunning scenery. The Isle of Wight is often referred to as ‘England in Miniature’, and in just one day of walking it’s possible to see the very best of the English countryside from sand dunes and pebbly coves to thatched villages and bustling sailing towns.

Find out more
Walks featured in the packed programme for 2017 include both guided walks and self-guided trails.

Most of the walks are free, although some walk leaders request a donation for their chosen charity

For all tourist information about the Isle of Wight, visit our Website.