The MayDay came in just before 5pm yesterday afternoon and the sailor was rescued at 4am this morning some 40 miles from the area of the initial search. 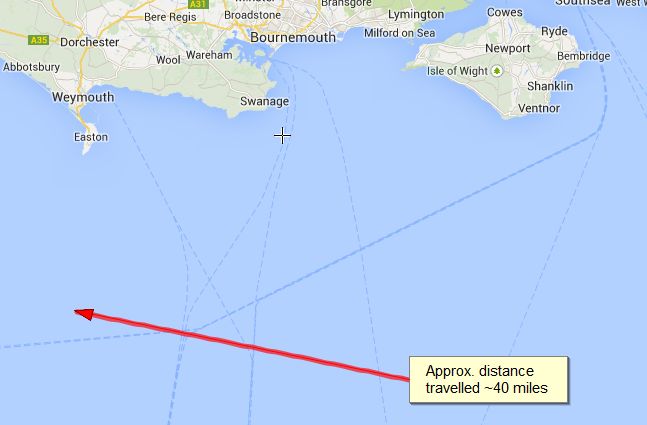 Coastguard rescue helicopters from Solent and Portland, as well as all weather RNLI lifeboats from Bembridge and Yarmouth were involved in a mid channel search last night after the Maritime and Coastguard Agency (MCA) received after a Mayday radio broadcast for urgent assistance was overheard.

Mayday call
At 4.50pm the Coastguard was contacted by a merchant vessel reporting that they had heard a Mayday on VHF radio from a trimaran vessel in difficulty and at risk of capsizing and reporting their position in latitude and longitude to be 37 miles south of the Needles (off the Isle Of Wight).

A British naval vessel also assisted with the search which saw overnight conditions of winds between force 5 and 6 from the west or south west.

Rescued this morning
A sailor was rescued from a battered and dismasted trimaran found this morning 18 miles south of Portland.

Coastguards coordinating the search for a trimaran in the channel overnight were contacted by the British naval vessel HMS St Albans shortly before 4am, reporting they were standing by a dismasted trimaran with one person visible on top of the damaged vessel.

The RNLI all weather lifeboat from Weymouth went to the scene and recovered a man from the damaged vessel and it is reported that there was only one person on board.

Image: © Used with the kind permission of Julian Winslow

Heard all this unfolding last night on marine VHF, shortly after the first mayday relay.

Much respect to the lifeboat and SAR crews, and the Navy, for conducting a long, and successful search,