Andrea Leadsom backed as leader by Isle of Wight MP

The first ballot in the Conservative Party leadership race took place on Tuesday. Our Isle of Wight MP, revealed who he will be supporting as Leader.

Read and contribute to the 39 readers' comments ↓ 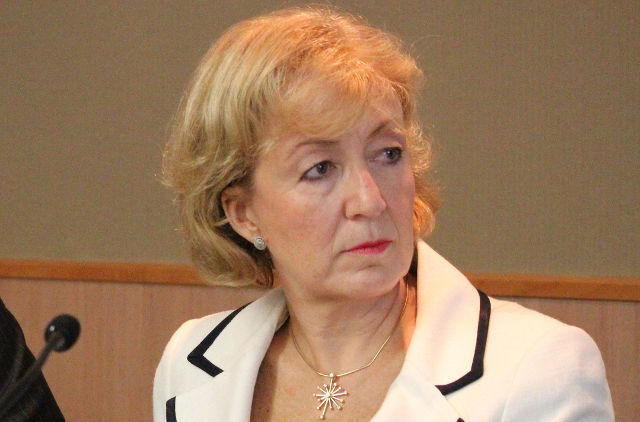 Isle of Wight MP, Andrew Turner, has revealed who he’ll be supporting in the current Conservative leadership race.

The ballot started yesterday (Tuesday) and will continue until only two candidates remain. The vote will then go out to party members across the country.

“I supported Andrea Leadsom in the first ballot yesterday and am likely to do so in the next round as I believe she would make the best Prime Minister.

“However, the ballot of MPs is only one part of the process, the final decision will be made by members of the Conservative Party nationally, and I am content with that.”

Scores from first ballot
Theresa May, the current Home Secretary, gained the vote of 165 MPs.

Energy Minister, Andrea Leadsom made second place with 66 MPs whilst Michael Gove, the Justice Secretary ended up in third place, with support of just 48 MPs.

Image: policyexchange under CC BY 2.0

But would she invoke article 50 immediately?

Well done, Andrew. I am sure you have made the right choice.

A suggestion that someone in politics has been less than entirely open and honest?

I am sure that we could all name a politician who is living a lie. I know I can.

Unsurprising as this is the choice of ex-UKIP Leader, Nigel Farage, and Boris Johnson.

That’d be the Farage and Johnson who caused all of this and now don’t have the bottle to carry it through.

I do note, however that, despite quitting UKIP, Farage will continue to trouser his EU paycheck.

Vote Up00Vote Down
I.Reader
Paycheck plus; (PE 1422 p.9) Number crunching – E8,213: monthly MEP salary NF will continue to draw for the next two years, despite resigning as leader of UKIP. E4,320: monthly general expenditure allowance which will continue to be available to him. £4,264: yearly travel expenses which will continue to be available to him for travel outside the UK, on top of his travel expenses to and from… Read more »
Vote Up00Vote Down
nico
As you say, he resigned as leader of UKIP, not as an elected MEP, (as far as I know). I take it that you don’t have to be a party leader to be an MEP. Should we assume he will draw expenses there “which will be available to him” without justification? As regards previous jobs, Wiki says of Farage: “On leaving school in 1982, he decided not… Read more »
Vote Up00Vote Down
Caconym
Nige is, certainly, an expense considering he has only attended 40% of votes between 2014 and 2016. He still trousered all of his wages and expenses, though. Bit of a cheek complaining that other MEPs haven’t done a real days work in their lives whilst in reality he, himself is a lazy skiver. And, of the MEPs sat around him while he was making that ridiculous diatribe,… Read more »
Vote Up00Vote Down
Geoff Lumley

When May wins he will once again be entirely without influence at the highest levels of his government. No change there then.

Vote Up00Vote Down
DaveIOW
With all this talk of May becoming the next PM, it makes you wonder what else could’ve been achieved if he hadn’t wasted all that time with Top Gear. But to be serious, does anyone on the Island have the slightest interest in what Mr Turner thinks? He’s a third-rate MP at the tail end of his career just clocking up the last few months for his… Read more »
Vote Up00Vote Down
Island Monkey

I’m surprised you can find no space to mention Andrew OPPOSED the Labour government lead invasion of Iraq Geoff. Yes, it’s a shame he didn’t have enough influence then.

Vote Up00Vote Down
I.Reader
As today’s Eye (1422, p.6) reports, others are less enthusiastic. “She was the worst minister we’ve ever had” said a treasury official talking to the FT about her time as City minister from 2014 to 2015. “She found it difficult to understand issues or take decisions. She was nonomaniacal, seeing the EU as the source of every problem”, recalled another. Ignoring her staggering volte-face since 2013 over… Read more »
Vote Up00Vote Down
iain mckie
“Speaking in 2010, Mrs Leadsom said: “Eddie George, then Governor of the Bank of England, called together a small group of bankers, including myself, and we worked over the weekend to calm the fears of banks that were exposed to Barings. The direct result was that there was no run on the banks on the Monday morning. Barings was allowed to fail and there was no systemic… Read more »
Vote Up00Vote Down
Luisa Hillard

Has anyone seen the video of an old Conservative discussing what he really thinks of the candidates? According to him Leadsom might not be quite as ‘anti’ as she seems.

Thank you. I could not remember his name, only that someone had nick named him ‘floppy hat’.

With regard to ‘old’, I was not referring to his age, although he certainly is aged, but rather that he was an active part of government some years ago.

Older and wiser than many I would suggest

He was a Member of the Cabinet as recently as 2014.

I was struggling to find Luisa’s turn of phrase merely descriptive.

‘A Conservative ex-Cabinet minister’ might escape an ageist connotation

How very rude, I wonder what the older voters in your ward will make of this? You too will be older one day my dear.

Especially in the current climate of a lot of Remainers thinking older people should have their votes weighed lighter than younger ones, watch out for creeping acceptability of casual ageism. (Not that Luisa intended this, I don’t suppose).

Some people will jump on any excuse to criticise and discredit.

My older residents let me know what they think when I meet with them at our monthly Older Voices meetings. Or the Community Partnership meetings, or the outreach events I am helping to set up to tackle social isolation.

Andrew Turner voted for the establishment of the EU External Action Service in 2010 and voted for the UK to be involved in a European Supervisory Authority, the European Banking Authority in 2012. He is not a eurosceptic by my definition.

Andrew Turner voted in the 1975 referendum not to go into Europe. . He has always been a Eurosceptic. It’s perfectly logical to vote for Andrea Leadsom. It’s also worth remembering that the front runner isn’t always the one that wins. It won’t be done and dusted till September.

Dave – 28591 people on the Islqand have a great deal of interest in what Mr Turner thinks and says.
Thar’s 40.7% of the electorate.
Much better than the other lot

Vote Up00Vote Down
DaveIOW
Those 28591 people are actually 25.775% of the Isle of Wight electorate. Your figure is misleading in that it is the percentage of votes cast, not as you claim the percentage of the electorate. I’ll leave it to your conscience whether you share if your deceit was wilful or simply down to a lack of understanding of the figures you confidently, but wrongly quoted. I’ll now ask… Read more »
Vote Up00Vote Down
billy builder

28591 is a little over 4 times as many people from IOW who have signed the petition demanding a second referendum. And I am sure the 6756 islanders who have signed represent only a small fraction of those dissatisfied with the referendum result.

The country needs a leader who will ensure we have as closer ties as possible with Europe.

Backing Andrea must be the worst choice for all of us

No real experience of government at highest level

And the only candidate who supported OUT, other than Gove, who we all know stabbed BJ in his bid to seize power.

A banker? My dog could do a better job than our bankers ante 2008.

In our house the term “Gove” has become a household word- such as “Make sure you get some plastic bags for the dog Gove”; “Oh Gove! I seem to have trod in some Gove” or the old favourite “Michael Gove and Turner are a pair of complete & utter Gove-heads”

I wouldn’t trust any of them to run my bath, much less my country.

They say that Ms May is “a difficult woman”
So was Margaret Thatcher and she is the best PM we have had since Winston Churchill.
She at least ensured that the Falkland Islanders continue to speak English and not Spanish
She engaged us in an honourable war (that we won, despite, the EU) which is more than you can say for
Mr Blair and his ilk.

Margret Thatcher, was she the one who stole the milk from our children, shut down the coal industry so we could buy coal from Australia, shut down the majority of the steel industry in addition to the ship building industry.

Yes I remember her, perhaps the worst PM ever

The woman who single-handedly sold off our national assets to her wealthy friends.

Companies that now pay huge dividends to share holders rather than paying profits in to the national treasury for our common good.

She was a thief! Robin Hood in reverse, she stole from the poor and gave to the rich.

Dont suppose anyone in the Falklands would agree with you.
Then yopu wern’t there to see their faces when the Argies surrendered were you ?

I couldn’t get the time off school!

But I’ve been a couple of times since then and know how much Thatcher is quite rightly appreciated down there.

That doesn’t however excuse the way she behaved here at home.

Billy. I don’t suppose the lack of milk did them much harm. It was only half a pint.
As for coal, shipbuildimg and steel, that was definately the fault of the unions and their restrictive practises.
Remember “who bores the holes” ? And many similar absurdaties.