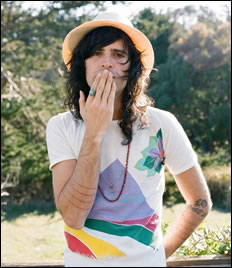 The temperature is rising at Isle of Wight Festival HQ as more acts are revealed.

This time we get hot and sweaty with the boys.

Six new acts have been confirmed, but it’s Devendra Banhart who we’re most excited about.

We’ve not had the pleasure of seeing him perform in the flesh, although his slot on Later With Jools Holland last year was mighty impressive.

We understand that Paul Butler from Island band, The Bees, worked closely with Dev last year and was spotted along with Fletch from The Bees representing Ventnor on the Beeb (see vid below).

He’ll be playing the Big Top on Saturday night along with Noah and the Whale.

Also confirmed for the Main Stage on Saturday night are Editors, The Courteeners and The Coronas.

Sunday brings Reef and Noah and the Whale to the Big Top.

Check On The Wight for full details of who is confirmed and how to buy your tickets.

When he was at Bestival a few years ago I found him a bit too laid back for my taste, but maybe he’ll grow on me.

Is an access/accessibility map available, showing the location of access/exit points; parking bays, standard accessible toilets and other facilities for people with a mobility impairment.

I think with all these extra boys they should add some more girls to the line up. Perhaps some home-grown talent like Holly Kirby ;-)

Failing that I guess Amy MacDonald, Sharlene Spiteri or Annie Lennox would do.

lol – I like the mention of Holly Kirby in an earlier comment. I don’t think people on the Island realise quite how popular she is – approaching a million video views now!