Why not share his big day? The venue is free, the music will be superb, the pub will be packed with fans and friends and a good time is guaranteed for all.

Thanks to Tony for sharing this news with On The Wight readers. Ed

Island guitar legend Dick Taylor, formerly a founder member of The Rolling Stones and still lead guitarist with The Pretty Things, will be celebrating his 70th birthday at the Crab & Lobster Tap, Ventnor on Friday 25th January. 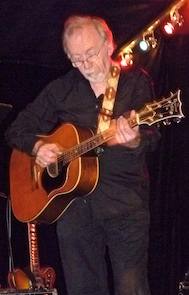 Dick has a long association with the Island which started with family holidays when he was a small boy. His parents eventually bought a holiday cottage in Ventnor and when Dick’s life changed direction in the 1980s he came to live permanently in Ventnor.

Dick, together with another Island musician Tony Minx, formed the now highly successful Hillmans Blues Band (“My Island Band” says Dick) who enjoy great success here and on the mainland. When Dick is touring, another Island guitarist Ross Honeybourne takes over lead guitar.

Dick’s life as a professional rock guitarist has been colourful, eventful and at times downright hilarious. He has some fabulous tales to tell and remains a modest, thoughtful and articulate man. His energy levels put most of his younger contemporaries to shame!

All welcome
Why not come and share his big day? The venue is free, the music will be superb, the pub will be packed with Fans and friends and a good time is guaranteed for all. The fun kicks off at 9pm with a special presentation taking place at 10pm.

Filed under: Music, Ventnor, What's On

newest oldest most voted
wight portal
And I believe there are still tickets to be had for the Pretty Things gig at the Wight Rock Bar in Ryde 2nd February. The Tea N Biscuit Boys are the support act, but don’t let that put you off, it’s going to be a good night. Tickets can be got from the Wight Rock Bar, or take a gamble and pay a little extra on the… Read more »
Vote Up10Vote Down
Jake_Gully