Jonathan Dodd: No Past and No Future

Jonathan Dodd returns with his Sunday column and this week talks quizzes. As always a great long-read. 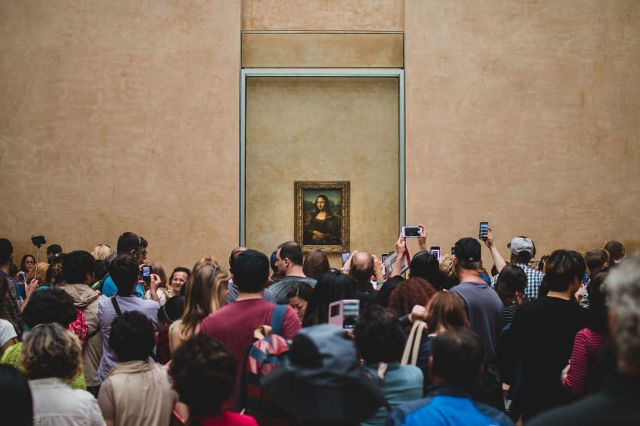 Back in 1503, life was rather simpler than it is today. At least I think it would have been, but I haven’t the equipment yet to go back and verify that information. I shall have to keep working at it. Back in Italy, all those years ago, there was an artist called Leonardo, who was about to paint a lady’s portrait. Leonardo was born in 1452 in a small town called Vinci, not far from Florence, in Tuscany, out of wedlock as it used to be called, to a notary called Pietro, also from Vinci, and a peasant woman called Caterina. Back then, and back there, people were named after the place they came from.

Leonardo was lucky. He survived all the ailments of childhood, there weren’t any wars or famines, and he wasn’t adversely affected by his father’s remarriages and his subsequent stepmothers, and he was apprenticed to a painter called Verrocchio. He was good at painting, and this was as good an apprenticeship as he could get, so he was able to set up his own studio, and he thrived. The rest, as we have seen, was History. Leonardo might have said that he was doing all right, and life was good. Perhaps he thought he was lucky, or maybe he counted his blessings. I don’t think that any amount of studying would help me to decide whether life is easier or harder now than it was then.

Present-day painters seem like Speedy Gonzales in comparison
Anyway, back in 1503 Leonardo accepted a commission from Francesco, who came from Giocondo, to paint a portrait of his wife Lisa. He accepted it, and then spent rather a long time getting on with it. Some say it wasn’t finished until 1517, which makes our present-day painters seem like Speedy Gonzales in comparison. Lisa’s original surname was Gherardini, which makes her the first person in this story to have a surname. I imagine she would have been bemused if my time-travelling self had told her that this image of her would make her one of the most famous women that ever lived.

Lisa was well-off and respectable, so she would have been addressed as ‘Ma Dona’, which translates as ‘My Lady’. This was because she was also a married lady. The English equivalent would have been ‘Mistress’, which was shortened to ‘Mrs’. In the same way, ‘Ma Dona’ was shortened to ‘Mona’. That’s why she is known to us as ‘Mona Lisa’. However, in many other countries she’s not called that at all, she’s called ‘La Gioconda’. This was actually a pun, because her husband was Francesco del Giocondo, which means ‘ happiness’, and ‘La Gioconda’ means ‘happy lady’. All of which has caused much confusion over the centuries.

Is she actually smiling?
The first problem is obviously this. Is she actually smiling? And that brings us to whether she’s actually happy or not. We all know that smiling doesn’t necessarily mean happy. Smiling is a recent invention, mainly in photos. The Victorians never smiled. There are many reasons and guesses as to why that happened. It could be because photographs were new, and somehow serious. It might have been because the Victorians were a po-faced lot. Maybe they all had terrible teeth, or it might have been because it took many minutes for the early photographs to fix themselves, so you had to stay remarkably still for a very long time. We’ll never know.

I have personal experience of how difficult it is to keep a smile on your face long after it has stopped being funny and is becoming rather painful. This not only proves that smiling is distinctly unnatural, but it also shows that reasons for smiling are usually fleeting. I was once, in a previous century, on a TV programme called The Krypton Factor. There was a round they called the ‘Intelligence Test’, in which you had to solve a puzzle. On the programme, it looked like a hard-fought challenge that took about two minutes. In reality, they gave identical puzzles to four of us, and kept the cameras rolling until three had completed it.

The 20-minute smirk shot
I took six minutes, and won. I was instructed to hold up the item that proved I had solved it , and to keep smiling, until the last one was left struggling. They called it the ‘Smirk Shot’. The third person managed it in 27 minutes, which was 21 minutes after I finished, and I had to hold my smirk for that long. I think it was honestly harder than the assault course. I never asked anyone to ‘smile’ after that, unless I was feeling just a little bit vicious. I had better teeth then, or it might have been even harder to do a smirk shot with my mouth closed. At least I was allowed to blink.

The truth about La Gioconda is shrouded in mystery, and includes much that makes the pursuit of History such an enticing and thrilling journey. We don’t know why it took so long to finish, or if it ever was. We don’t know if it is really a portrait of Lisa, of if there are several or many actual portraits or copies out there. We do know that it was acquired by the King of France, and eventually ended up in the Louvre. I think the mystery adds a whole set of extra enticements to its legend and place in the history of art, and I’m very glad to belong to a world in which it’s possible to share in an appreciation of such extraordinary things.

Edge-of-the-seat quizmastering
I was running a quiz last night, and I had randomly selected two questions in different rounds, one about La Gioconda, and another about why Victorians were invited to say ‘Prunes’ instead of ‘Cheese’ when they were photographed. I had thought that it was because of the seriousness thing, but people came up with lots of different ideas, and I like that. It makes for exciting and edge-of-the-seat quizmastering. There’s often a thin line between right and wrong, and when the difference can amount to winning or losing, it becomes extraordinarily important. I like to think I manage to keep everybody happy.

My favourite quiz story involves my favourite film critic, Mark Kermode. He is encycploedic about films, and a fierce talker. He once went to a quiz at his local pub, and the quizmaster asked this question in the film round– “What’s the Lion King’s Name?” Kermode put his hand up. “Which Lion King?”, he asked. “What do you mean, which Lion King? Just write the answer!” Kermode’s hand went up again. When he had the quizmaster’s attention again, he asked this – “Which Lion king do you mean. There were three. Do you mean the original one, or the middle one, or the one who ends up as the Lion King?” He didn’t mention names, of course, because he never does spoilers (but I do. They were Mufasa, the father, Scar, the uncle, murderer and usurper, and Simba, who nearly didn’t make it, and didn’t want it, but who got the job in the end). The quizmaster became irate and threatened to have him removed if he kept heckling. I’m with Kermode, all the way, even unto being dragged out of the doors, kicking and screaming.

The actually-quite-good king he really was
That’s why I research my questions and check the information and try to imagine all the ways I could be tripped up. And I know that’s never entirely possible, because there’ll always be something that you missed out. And the thing about history, and our understanding of it, or anything else, is that a lot of it is made up, or forgotten, or someone got to write it who had a particular story to tell. Henry VII took Richard III’s throne, and got his tame historians to turn Richard’s life into fake news, making him out to be a monster, rather than the actually-quite-good king he really was. And that’s why Henry VII is buried in Westminster Abbey and Richard III was dug up in a council car park. Shakespeare read those histories, and that’s how he portrayed Richard III. Although whether he was being careful or really thought it was all true is also shrouded in mystery.

To me, the lure of quizzes is all about our dubious relationship with the shifting sands of truth. Sometimes we believe things because we want to, or maybe we’re just spouting received wisdom – things we were told and never questioned. And sometimes we just don’t care. One day there will be a history of these days we’re living through. Will we recognise it, or will we have become so confused that we’ll believe that was what really happened? Probably we’ll just stick to the opinions we have right now and disbelieve anything that contradicts them. Nothing really changes.

Minds greater than mine
And in the meantime, I love quizzes. I used to just love going to quizzes, and now I love running them. There’s progress for you. Perhaps I should start writing History too. I could have a lot of fun with that. When I’ve perfected time travel, I’ll bring Leonardo back, and see what he thinks of it all. In the meantime, here are some notable quotes about History from minds greater than mine. I like the last one best.

“What is history but a fable agreed upon?”

“History repeats itself, first as tragedy, second as farce.”

“History is written by the victors.”

“The very ink with which history is written is merely fluid prejudice.”

“A generation which ignores history has no past and no future.”

1 Comment on "Jonathan Dodd: No Past and No Future"

Perhaps the painting was just a vanity project…