Jonathan Dodd: Of Tunnels and Poles, Greasy or otherwise 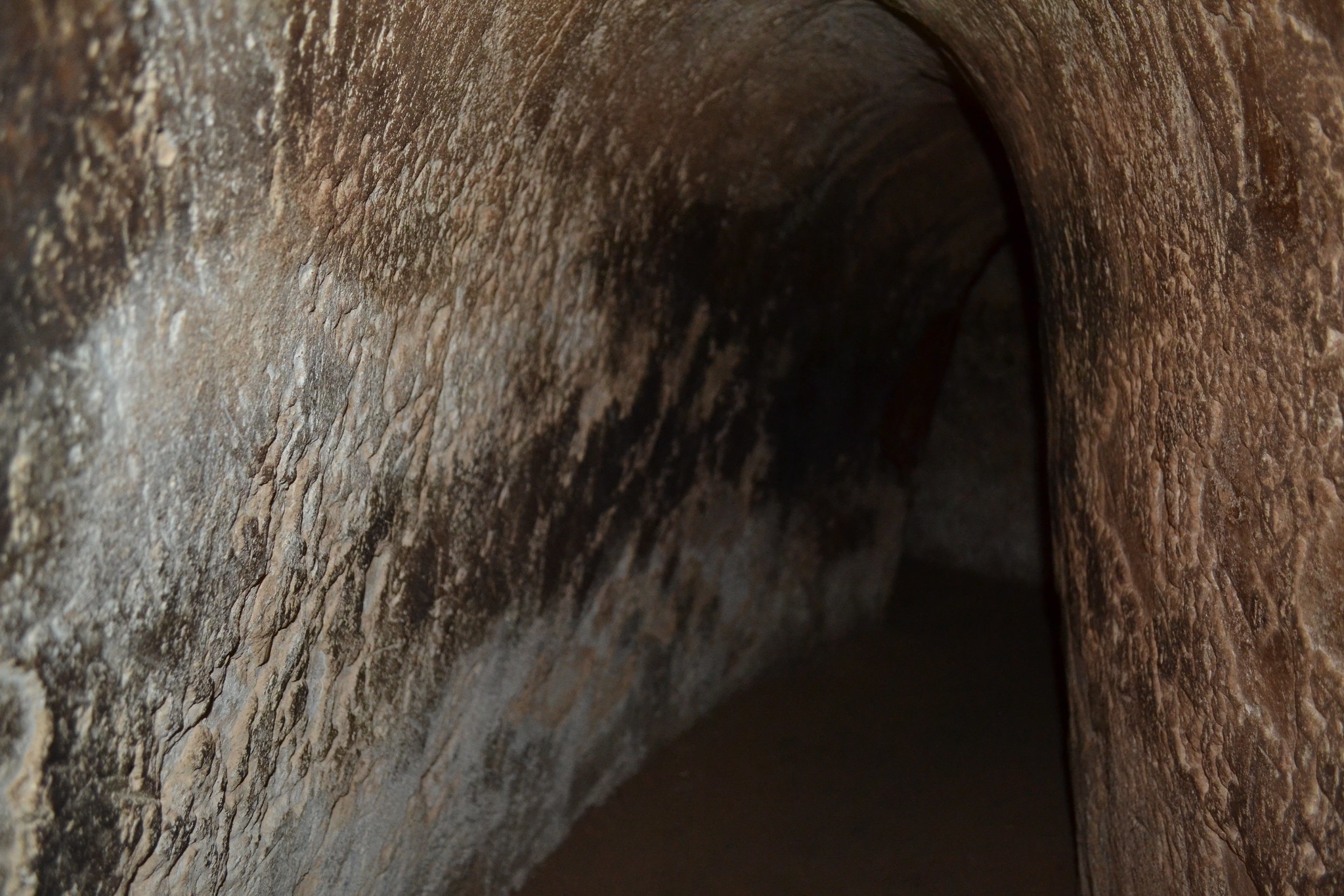 I’m finding it hard to engage with things lately. I’m not sure why. Sometimes it’s enough to be able to describe what you’re feeling, and know that you don’t know really why you’re feeling like that. I think depression is supposed to work in that way, except that it’s not just your feelings, it’s all of you. I remember a time in my life when I felt particularly bad. Life had given me a bit of a beating, and it seemed like I had lost everything that mattered. I just felt bad about it all, and I couldn’t see anything apart from the place where I was going to put my foot next on the downward-sloping path I was on.

I remember it was dark all around, and the darkness felt like walls, until they became a tunnel. I remember the tunnel becoming smaller as I went down, and I couldn’t summon any resources to tell myself that it might not be like that. Down and down it went. I remember I thought it was a bit like the horrific journey through the mountains in Lord of the Rings. It wasn’t so much a journey through emotions, it was a journey through emotions that had been so dampened that everything seemed closed down and disconnected. I got to the bottom, there was a reckoning, and somehow I emerged back into the light, knowing I was older and wiser and able to go on with my life.

A healthy separation of your feelings and your intellect
I suppose I didn’t have it really bad, and I shudder to think what might have happened if I hadn’t emerged. I also realised that I was in that tunnel a relatively short time, although it felt like forever. The two things I came away from that horror went like this. First, depression is all about the emotions, the energy you need to stop yourself feeling so many bad feelings at the same time being so much that you shut down all of your perceptions, and the world shrinks around you. Literally. Second, depression is dangerous when it gets hold of your intellect at the same time. If you have a reasonably healthy separation of your feelings and your reason, your mind won’t shut down at the same time, or not as much, as your imagination.

My tunnel was formed by my emotions shutting down so much that I couldn’t see further than my next step. The thing that saved me was my reason kicking in and persuading me that the tunnel wasn’t the only version of reality available. I forgot for a while that reality is always made up of a lot more than you can actually see or sense at any given time. So depression is characterised by the shutting down of your imagination, and you can be saved if and when your intellect opens your eyes again to other possibilities. It was scary and I never want to go there again. Perhaps this understanding will prevent that.

Setbacks like the snail sliding down the pole a bit
I want to emphasise that this version works really well for me, and it helps me to know where the boundary between my emotions and my reason lie. I like to have a lot of flags and information signs up there on the dividing line, so I never unknowingly stray from one to the other and mix up my feelings with my thinking skills. It may not be universal, or indeed it may only work for me, but I like it, it works for me, and I offer it to any of you who may be able to use it in time of need.

The thing about the way I’m feeling now is different. I’m emotionally upset by a variety of things, partly personal, and partly because I don’t like the way the world is functioning at the moment. I can’t help feeling like this, because I used to think that things were getting better. I used to be able to say that any setbacks were like the snail sliding down the pole a bit, but that generally the progress was upwards, towards the light. This was a given for me. No not that pesky gibbon. Like the damp squids, the gibbon in every argument keeps jumping in and laying waste to my concentration. I’ve had to concede lately that the snail has slid a whole way back down the pole, and shows no sign that it might start going up again.

Some desires are baser than others
I’m not so much bothered by why the snail is losing ground as by the ground-losing itself, because my whole faith in everything is that we’re supposed to be getting cleverer, and more educated, and more generous, and more in control of our baser desires. Everyone has base desires, although some desires are baser than others. The key to civilisation is the control of base desires in the greater interest, and the understanding that everything that you do that hurts someone else will eventually come back to hurt you. The chief base desire is all about selfishness.

We despoil the land, not realising that it’ll come back to us with wild weather, higher sea levels, floods and storms. We lay waste to other countries, or just watch while others go about that ghastly business, thinking it doesn’t concern us, until terror comes to our shores, committed by people whose lives have been destroyed on those same wars. We decide we don’t need other people or other countries, and that we can just build walls to keep them out, and then we complain when we can’t travel, or it costs more to buy things made elsewhere in the world. I could go on.

The ages of reason alternate with the ages of stupid
I thought we had gained ground on the base desires. I thought we were susceptible to reason rather than angry soundbites. I thought we were able to distinguish between stupid words and words of reason. I thought we would be able to distinguish between a man in a suit who lies and lies and someone scruffy, or young, or female, or poor, or from another country, or any combination of the above, trying to tell the truth, or at least engage us in discussion. There’s my given, turning into the gibbon again. I’m so saddened by all this that I feel depressed about it, and my imagination is struggling to find any good in it, or any prospects of getting back where we were. I’m not in trouble, because my mind is still working properly, but I’m aware that it hasn’t got much that’s positive to work on.

Perhaps this is all some aberration, and normal service will be resumed sooner or later. Perhaps I haven’t lived long enough to realise that the ages of reason alternate with the ages of stupid, like the Ice Ages ebbing and flowing. I thought we would be able to overcome that by knowledge and reason. I remember a wonderful line from the Jack Nicholson film As Good As It Gets. He plays a wonderfully irascible writer of romantic fiction. I’ve removed the word ‘women’ and substituted *****, so you can choose what group of people you might want to describe in this way. A fan asks him – “How do you write ***** so well?” He responds with this – “I think of a man, and I take away reason and accountability”.

I take comfort in the idea that we’ll come to our senses again, before we run out completely of toilet paper and pasta, and that we’ll all inevitably come into contact with covid-19 in the near future, but that it seems most of us will recover and add those antibodies to the vast stock of defences already installed in our immune systems. I rather hope I’ll survive myself, and all my loved ones. I have the same hopes for all of you, and even for those who won’t read these words. I’ll keep on columning as long as I can, and I suspect in a few weeks or months we’ll be wondering what all the fuss was about.

Wash your hands a lot, be sensible. Look after yourselves and your loved ones
I expect we’ll be faced with a few grisly discoveries of bodies lying behind vast barricades of pasta and toilet paper in the coming days. And then it’ll all go back to normal. Whatever normal is any more. I’m still going to have to readjust, wherever the flow of history takes us. Meanwhile, I’m watching that snail like a hawk. Hopefully, not a hawk waiting to pluck it off the pole and eat it. Even my mixed metaphors are coming out all wrong. I blame those vaccines. Or maybe the Chinese. Or Snowflakes. Or Corbyn, who, disturbingly, I keep being mistaken for. People in the street ask me to give them a message of hope. This is what I say.

“Wash your hands a lot, be sensible. Look after yourselves and your loved ones.”

Meanwhile, I think it might be a good idea to bolt for the nearest tunnel. It might be safer in there.

If you have been, thank you for buying this sparingly.

Image: csammis under CC BY 2.0

1 Comment on "Jonathan Dodd: Of Tunnels and Poles, Greasy or otherwise"

I believe that your recovery will be more than a “cat bounce!”