The resident group KILF believes it’s vital for Island Line’s survival that this Isle of Wight train line must stay within the South Western Rail Franchise. Here are the results they’ve shared with OnTheWight of responses they got when asking for assurances from each of the local election candidates on the route. 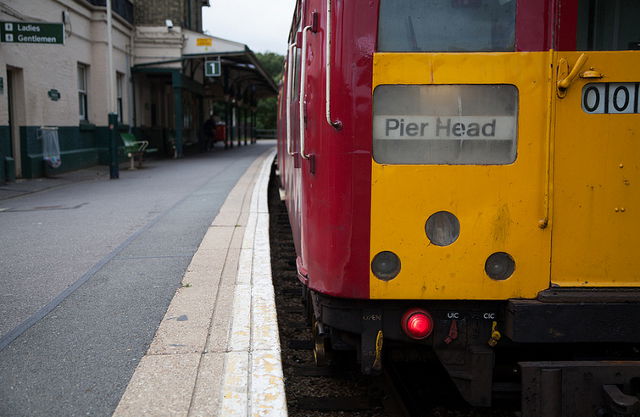 Last week the Keep Island Line in Franchise campaign emailed all candidates standing for 2017 Isle of Wight council election in the wards on the Island Line route (Ryde through to Shanklin, along with Wroxall and Ventnor, given the rail / bus link). Contact was made either directly or through the candidate’s party.

We asked these candidates to declare their position on Island Line, so that there can be transparency as to what stance they will take post-election, if voted in on 4th May. The background to this was set out in an email to the candidates, which can be found here.

Option to remove franchise
Essentially, even though the next South Western Rail Franchise has been awarded to First Group MTR – who have proposals to invest in Island Line – there remains an option in the new franchise agreement for the Secretary of State to transfer the route to a “Replacement Island Line Operator”, i.e. remove it from the security of wider franchise, which we believe would be disastrous for the service’s long-term viability.

The role of the Isle of Wight Council (as a named “stakeholder”) will be crucial in making the case to the Department for Transport (DfT) that the option to remove Island Line from the wider franchise is not invoked, and instead urging the Government to support First Group MTR’s proposals for investment, which will secure its long-term viability and future in the wider franchise.

Our questions
At the point of this initial publishing, we have received responses from 44 out of 71 nominated candidates, including at least one from every ward. We will add updates with further responses as and when they are received.

We asked the candidates whether, if elected, they will:

1) Advocate Island Line being retained in the wider South Western Rail Franchise, and as part of the national rail network.
2) Urge the IW Council’s post-election leadership to make representations to the DfT in support of this objective, including asking the Government to support First Group MTR’s plans for much-needed investment in Island Line, thereby securing its future in the wider franchise.

Some candidates responded by explicitly addressing these two questions, whereas others just gave short responses in support of Island Line more generally. It is up to voters to decide how to interpret these responses, and whether to seek further clarification from the candidates directly.

Unwaivering support?
From our perspective, we are particularly keen to receive reassurances from candidates that, if elected, they will not waiver from supporting Island Line’s longer-term future in the wider franchise – as we fear there will be post-election efforts (through the forthcoming report of the Transport Infrastructure Taskforce) to persuade councillors to back an option that sits outside of the franchise.

Important issue in General Election too
We remain concerned that certain interested parties (principally outside of the council) will continue to promote an approach that could see Island Line removed from the security of a wider franchise, and in light of this we anticipate that the future of service (and the DfT’s role in supporting it) will be an important issue in the upcoming General Election.

27 Comments on "KILF asked IWC candidates for assurance to keep Island Line in Franchise: Their responses"

Just for clarity, KILF asked only those candidates standing in wards along the line. This is surprising since Island Line affects a much wider population.

Agreed. I was also unaware that Ventnor and Wroxall had returned to the Island Line. I must have missed that.

Vote Up00Vote Down
Terry Carpenter
Geoff,The article mentions the inclusion of Wroxall and Ventnor by virtue of the dedicated bus/rail link service between Ventnor and Shanklin. The line between Shanklin and Ventnor (4 miles) included one intermediate station at Wroxall. The line was closed by British Railways on18th April 1966. So for historical reasons there is still a poor substitute link between Ventnor, Wroxall and Shanklin, in memory of the ghost of… Read more »
Vote Up00Vote Down
Sally Perry

Very many residents in Ventnor rely heavily on Island Line.

They may require a bus link between the two towns, but it doesn’t take away the importance of the train line for them.

I am aware of that. I still don’t see why this is an issue only for some candidates

I agree that it is an Island-wide issue – even for those who don’t use the line. The existence of it has a positive impact on the Isle of Wight economy and that affects everyone.

Mr Lumley.I think you have hit on something here. Could it be that KILF is being used politically?

Considering who leads KILF, I’d say that was a big yes.

Vote Up00Vote Down
Andrew Smith
Interesting selective questioning from KILF, although I agree with electrickey Island Line does affect more then just the wards asked. Its nice to see Chris Quirk has prepared a nice response, but considering he is one of the main KILF representatives I feel he has been given an unfair advantage of having substantially more time to write his piece. As for the postee of this article, am… Read more »
Vote Up00Vote Down
Richard

As I guard on Islandline,we do have a lots of passengers using the line from Wroxall and Ventnor.
They use the park and ride scheme, or catch the bus to Shanklin and continue their journey on the train, especially if they are going over to the mainland, as we can do through tickets on the train.

I still think all candidates should have been approached. I use Island Line on occasion as do some of my residents, even if only from St Johns.

Ian Ward’s reply speaks volumes, he is totally out of touch not only with locals but it seems most of his Conservative colleagues too.

Yeah, but he’s probably not out of touch with his Tory boss Andrew Turner. I’m sure he’s totally on message to represent his views (or those given to the MP by his transport adviser Nick Finney).

One has to ask whether Ian Ward is more interested in holding onto his transport brief at IOW council than in representing the views of Sandown South residents.

It sounds to me as though Ward, Turner and Finney share the same view and have a plan to see Islandline placed into community ownership. I like to call it the W.T.F. plan, it places the long term future of Islandline at risk whilst enabling them to ignore the wishes of their constituents.

Vote Up00Vote Down
trainspotter
It is noticeable that neither Turner or Ward have said anything positive about First Group’s proposed investment. I wonder why that could be? Surely if the department of transport allowed the new operator’s plans to go ahead, it would kill their plans to transfer Island Line out of the franchise. I wouldn’t be surprised if the post-election plan of Ward and Turner is to scupper First Group’s… Read more »
Vote Up00Vote Down
Rod Manley

Seems like a very reasonable demand by Pugh to safeguard the future of Island Line. I would imagine only a Corbyn person could give such a guarantee. There again the caveats in the franchise sustainability plan are hard to be reconciled, so Nationalisation of the railways could be the only answer… Corbyn again.

And Caroline and others, who see the stupidity of the extra expense and unco-operative fragmentation of our small crowded country’s essential public transport infrastructure.

You can play about with wording,but it is still in there(caveats).

I can’t understand why something so important as Islandline has to become something to squabble about?
Forget what your political allegiances tell you to do, and stand up for a service that is vital to the Island, in other words, some prospective councilours need to grow a pair.

Vote Up00Vote Down
electrickery
Does anybody know what First/MTR’s “plans” actually are? Or is this just more vapourware? There are viable alternatives to staying within the franchise, none of which is getting airtime thanks to KILF’s monopoly of the subject. Rail re-nationalisation is not going to happen tomorrow but could be achieved over time as franchises come up for renewal, except that that would require some continuity and vision within government.… Read more »
Vote Up00Vote Down
trainspotter
Electrickery, I don’t know what you’re on about. Other alternatives to keeping Island Line in the franchise have had airtime – just look at the coverage of Mr Garnett’s tram proposal, although whether it is viable is another question. First Group have indicated that they will be consulting this summer on proposals to introduce more modern rolling stock, a new passing loop to allow 30-minute intervals and… Read more »
Vote Up00Vote Down
Richard
Electrickery KILF are only keeping the vastly unfair treatment of Islandline in the spotlight. Would re-nationalisation keep Islandline open? The fact is, many TOC’s run at a loss, a far bigger loss than Islandline , but they are beng invested in, and not threatened with bring taken out of any franchise, why is Islandline being treated differently? If private companies want to run railways, they have to… Read more »
Vote Up00Vote Down
electrickery
There we differ, Richard. Tory dogma is that the franchises are profitable businesses first and a service only if it is compatible with profit. You don’t see the Directors of Stagecoach going hungry, do you? (second only to Go-Ahead Group in earnings growth – that’s the Go-Ahead Group, btw, that runs Island buses). I agree that nationalisation can’t solve all the problems but it puts everything into… Read more »
Vote Up00Vote Down
KILF not!

im pretty sick of the politicisation of almost every story on this site and constant inaccuracys.

the KLF – there proper name – best nown for The Justified Ancients of Mu Mu – couldnot care less about trains,the isle of white or geoff lumpley

It was Dr Beeching ( chairman of BR ) that closed more lines than any privately owned railway franchises.

But, this is irrelevant in my opinion, the question still needs to answered, why is Islandline being treated differently to the other many loss making lines in the country.
You could argue, the same would be happening if the railways were nationalised.

Vote Up00Vote Down
Chani-may Courtney
I am standing for the Liberal Democrats in Lake South. I am commenting in this way as I was not asked by email as the article states and only found this as I have an active interest in the island infrastructure allowing freedom of movement. Trians and buses are essential to feel connected and allow commuting for work and pleasure. 1. I would support the island line… Read more »
Vote Up00Vote Down
johngraney

I am such a candidate and this is the first I have heard of such a letter.

For the record I believe that in the current situation the Island Line should remain part of the franchise. Detaching it would put it in danger of closure. Obviously it needs money spent and work doing but that would be unlikely outside the franchise.