Knitted teddy bears given to children living with domestic abuse: How to knit and donate

Neighbourhood Policing Teams are continuing to engage with local knitting groups to gather more bears. Officers give them the knitting pattern and they send their finished bears in to their local station. 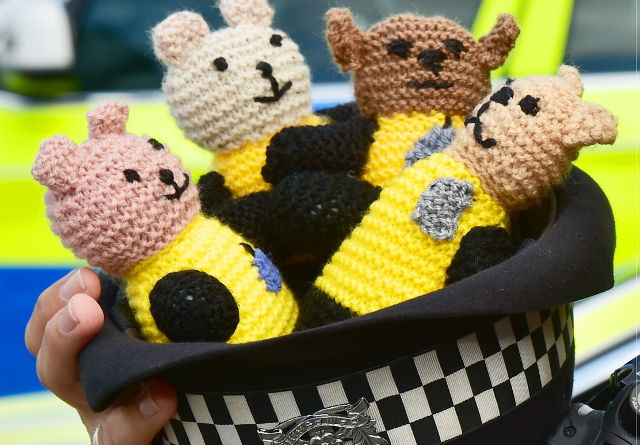 Knitted police officer teddy bears are being handed out to children involved in incidents of domestic abuse.

The bears, which are knitted by volunteers, were first used in February this year. They are given to children by officers to help communicate with them and break down barriers that can exist when police attend after a domestic incident.

“We want to make children safer, we want to give them a voice, and ensure they are included when we have to attend a domestic abuse incident in their home.

“Domestic abuse can have devastating effects on children and they need to be properly spoken to and safeguarded. We also don’t want them to think we’re scary or be afraid of us now, or in the future. The bears give us something tangible to handover and talk about, to break down barriers, and engage with the young child.

“As with any information we give out to victims, it must be done safely. Each incident we attend will be considered on a case by case basis by attending officers to ensure it is appropriate.

“We’ve had a great response from volunteers who want to help; from local knitting and community groups, relatives of police officers and staff and even people knitting them in their lunch breaks at work.

“These bears are designed to be given to children living with domestic abuse, but there have occasions where officers have used them to help children involved in other distressing incidents.  The more we have, the more they can be put to good use to help a child.”

“I gave out my first bear earlier this year and it worked really well. The little girl I gave it to was so proud and really opened up as a result.

“I told her about using her bear to be brave and that if officers attended again then she should get her bear and they would know to speak with her.

“When my colleagues re-visited the following morning, the little girl ran upstairs to get her bear and show them. Instantly they had something to talk to her about and they had a nice chat about the bear. This helped lead on to another conversation about what happens at home meaning they could gather more information.”

Doel: Know the bears are really helpful
Tara Doel from Southampton, who has donated bears, said:

“The Buddy Bears scheme is a fantastic idea and I love knitting. This project is particularly pertinent to me as I work for Yellow Door who provide services around domestic and sexual abuse in the city of Southampton and western Hampshire so know these bears are really helpful for officers attending where frightened and distressed young children may be in attendance.”

A recent batch of bears delivered by Tara were made by her cousin, Kath Cornish who also lives in Southampton.  Kath said:

“I am happy to help out wherever I can especially if it helps someone.”

“As a WI group we decided to provide all of the emergency services with a few appropriate toys which my colleague recently handed over. The police officer dolls being part of this. Our Knit Stitch and Natter group also make various articles for other worthy causes, and all of this is made possible by donations of materials by our members.

“The Alresford ladies are thrilled that the police and children are so pleased with the toys and we will continue to make as many as are needed.”

Get the pattern today
Neighbourhood Policing Teams are continuing to engage with local knitting groups to gather more bears. Officers give them the knitting pattern and they send their finished bears in to their local station.

If anyone would like information on how to get involved with knitting these bears for the force, they can find them on the Website.

2 Comments on "Knitted teddy bears given to children living with domestic abuse: How to knit and donate"

Maybe members of the Council could consider to start knitting a few of these rather than browsing for trousers or supporting disastrous schemes like the alterations of St. Mary’s Roundabout…

One of these would be a helpful and positive addition the IOW Council.