Legally maintaining access to your Rights of Way (part one) 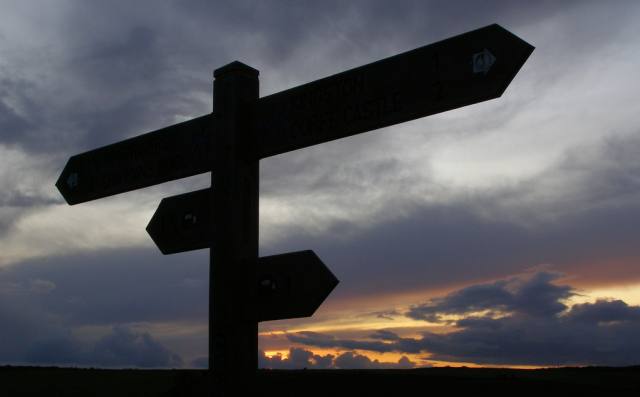 On The Wight reader Thomas Cowley is passionate about Rights of Way access on the Isle of Wight. He has put together a series of articles for On The Wight readers, explaining what you can do about Rights of Way that have been blocked and how to protect future access. Guest opinion articles do not necessarily reflect the views of the publication. Ed

I’ve had a keen interest in rights of way from when I was in the Cubs and more so since I started mountain biking, which is about 25 years ago now! One of the worst situations you can find when navigating by map, is a right of way which you expect to be passable on a map, but turns out to be impassable for some reason.

Maybe there’s a locked gate, maybe someone’s built a wall across it. There are all sorts of ways in which it’s possible for a right of way to become impassable. I know from my and others experiences that it’s very frustrating trying to get routes unblocked, or cleared.

Legal routes to gaining access
There are legal routes to get rights of way unblocked. These apply to footpaths, bridleways, restricted byways and byways open to all traffic.

I am going to outline how I’ve got two routes on the Isle of Wight back into service for vehicular traffic, but what I will discuss can be applied to any of the different types of rights of way.

Survey carried out last year
As part of the IOW 4×4 Club I completed a survey of the Isle of Wight’s unsurfaced vehicular rights of way last November. During the survey we found a couple of routes which had been blocked.

Once we’d finished the survey I was rather left in a quandary. I could write about the problem to the rights of way officer at the Isle of Wight Council, as many from IOW 4×4 Club had previously.

Despite many letters and emails previously, nothing had been done about one of the problem routes, through Bobbestone Farm, which had been obstructed for a number of years. I had also been met with total inaction on the other blocked route, above Compton Farm, despite a couple of emails earlier in 2011.

The Answer: Section 130
It struck me that there must be a legal mechanism to resolve blockages. As ever in these times, Google came to my assistance. Very helpfully, on the Ramblers Website the process is outlined in a step by step manner, for laymen.

The legal mechanism provided to remove blockage from rights of way is Section 130 A-D of The Highways Act 1980.

Where can we use this process?
S130 can be used to resolve blockages on footpaths, bridleways, restricted byways and on byways open to all traffic.

When can this procedure be used?
Only if the obstruction in question is ‘without lawful authority’. This can include the landowner’s favourites – locked gates, farm machinery left blocking footpaths, walls, fences, other structures and anything else dumped on the right of way, forming ‘a nuisance’. It also covers the ever popular option of overhanging vegetation.

Where S130 is more difficult is in the example of overgrown rights of way, as it can’t be used if a route is ‘out of repair’. Does this cover staircases providing beach access? I don’t know, but I would be happy to discuss completing the forms with someone who would like to test this.

Look out for part two of the series to learn more.

newest oldest most voted
ThomasC
How ironic – As a mountain-biker I think ramblers by their large number churn up and erode the countryside, are noisy, seem to leave plenty of litter and are pretty anti-social vs other legal users of rights of way. What’s ironic is also how angry ramblers become when mountain-bikers happen to be on the same bridleway as them at the same time. Unfortunately this and other incidents… Read more »
Vote Up2-1Vote Down
steephilljack

Phew! you are really making your prejudices clear for all to see. Ramblers churn up paths, make a lot of noise and leave litter. I have no objection to anyone using footpaths and bridleways unless they have motor vehicles.

Vote Up00Vote Down
ThomasC
I would have a large objection to anyone using a bridleway or footpath with a motor vehicle, as they are not permitted on those rights of way. In fact I would encourage you to pick up the phone and report such users to the police. Byways open to all traffic on the other hand are rights of way where motorised vehicles are permitted and are maybe a… Read more »
Vote Up10Vote Down
steephilljack

Your erroneous assumptions about my attitudes and behaviour become more creative with every posting, so I withdraw from further comment.
I look forward to Part 2 of your contribution in which, I hope, you will clearly state your obsessive objectives and identify those people and organisations who you really hate.

How long have the paths down to Whale Chine and Luccombe Chine been officially closed? Not sure about Luccombe, but I reckon it must be 20 years for Whale Chine, though perhaps it’s been opened and closed again in that period.

You should join the IoW Ramblers who are represented on the Island Access Forum where these matters are discussed with the County Highways department.
http://www.iwight.com/living_here/environment/rights_of_way/The_Isle_of_Wight_Local_Access_Forum/

Vote Up00Vote Down
ThomasC
Hi Steephilljack, thanks for the offer, but The Ramblers wouldn’t really be representing my best interests on the Access Forum, plus I’m already a member of an organisation that’s represented on the forum. Rights of Way doesn’t just mean footpaths for walkers – it means all legal rights of way, for the traffic designated to travel on those rights of way. The ramblers seem to be significantly… Read more »
Vote Up00Vote Down
steephilljack
I am glad that you have expressed your objectives with more focus. I don’t think that you want to drive your 4x4s down Whale or Luccombe chines, but I don’t mind if you try. As a walker and Rambler member, I don’t want 4x4s or motorbikes using trails, even if it might be legal. Why ? Because they are noisy, they pollute the air and they churn… Read more »
Vote Up0-2Vote Down
Beryl Stewart

The Botanic Gardens …are they blocking any coastal path accesses?

No, the coastal path that passes the Botanic Garden is all clear. I was there on Saturday.