Letter: Who is monitoring the work of Island Roads?

Mayor of Yarmouth, Steve Cowley, says Island Roads failed to plan work adequately and did not consult with the local community. He’s concerned other villages and towns across the Island might suffer as a result of similar failures. 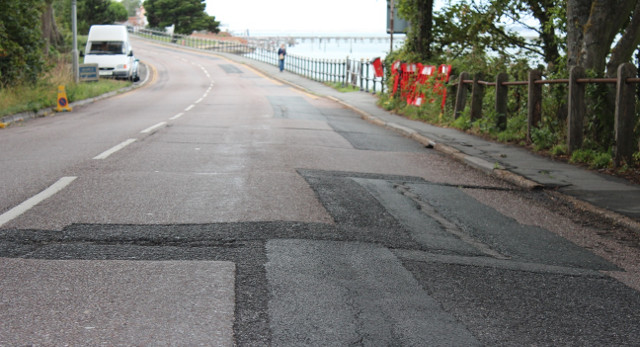 We always welcome a Letter to the Editor to share with our readers. If you have something you’d like to share, get in touch. This one from Mayor of Yarmouth, Steve Cowley. Ed

As Mayor of Yarmouth, I respond to the concerns of local people. We all understand the need to do the work at Bouldnor to ensure that Yarmouth is not cut off.

To enable people to understand why things are being done and why roads are being closed, Island Roads has a responsibility to inform people accurately what is going to be done and when, so that they can plan to get on with their lives despite the works. As tax payers, we are paying for the work.

Two week closure changed to seven weeks
Last October we were informed that the roads were to be closed for two weeks. Local residents and businesses understood and accepted the closure as a consequence of the work. However, Island Roads decided without further consultation that they needed to shut the road for seven weeks, until at least April 4th.

Various excuses were given about wind, rain and the involvement of British Gas and Southern Electricity. These reasons lack credibility. If the work was planned properly these issues would have been taken into account before work started.

Premature closure
The Bouldnor road closure was advertised as starting at 9.00am on Monday February 17th but, without explanation, the road was closed at about 7.00am.

I phoned IWC to complain on behalf of those affected, to be told that IR regulate their own road closures.

Emergency access
The issue of access for emergency services whilst the road was closed was raised because IR had not contacted the RNLI. It appears that IR had informed by e mail other emergency services, but actual access arrangements had not been made.

IR agreed with the ambulance service that they would give them the access code to two sets of gates to get through at night. This unsatisfactory arrangement was not put in place.

Night work on closed road
Tennyson Road was closed in order to be resurfaced, with the work done mostly at night ‘so as not to disrupt through traffic during the day’. There was no through traffic, as the road was closed, so residents were kept awake all night unnecessarily, by work which could have been done by day.

Three main issues arise, which need to be addressed to ensure other villages and towns across the Island do not suffer damage to businesses and lifestyles, as has Yarmouth.

Lack of monitoring
When the PFI contract was awarded to IR, staff involved in setting it up retired from the Council. Some moved directly to assist IR deliver the contract, leaving, in my view, the IWC short of experienced staff to monitor IR.

13 Comments on "Letter: Who is monitoring the work of Island Roads?"

How can a contract that runs for 25 years hope to encourage competition – the main reason behind awarding a PFI contract?

Private companies have 1 main priority: profit.
Everything else is secondary. How is this better than the Council, whom we elect, and have oversight on, running these services?

This whole thing sounds like a scam to me.

Vote Up00Vote Down
Braveheart
Having just read this very interesting account of how badly the residents of Yarmouth have been treated by Island Roads, and last year other issues were levelled against them in East Cowes. It must make the Islands residents wonder just how fit for purpose this company really is, couple this with the fiasco of the Undercliff caused in part by Vinci Ringway and these people as far… Read more »
Vote Up00Vote Down
OHMY

As i have said before what can be expected when the same people who were running the old highways dept, on the council, just remember how bad it was, are now running Island Roads,it is evident they don’t have a clue of how to operate in the real world, watch this space!!!!

I fear Steve Cowley is right: the expertise required to monitor Island Roads’ work no longer seems to be there. This is potentially disastrous for the island, and could leave us with a worse road network – that which is left after landslips – than we’ve got already.

Vote Up00Vote Down
davidwalter
Most of us are not experienced highways engineers and we judge by what we see; is the work timely, tidy, well-planned and considerate? We have seen some notable deficiencies in some or all of the above. We must seek reassurance that the quality of the engineering and fabrication is satisfactory. Given the questionable/poor experience with those things we CAN see, should we be concerned about the things… Read more »
Vote Up00Vote Down
Black Dog
Let us hope that we have councillors with some conviction who will dedicate the time to examine the contract and the way the contract was negotiated. Councillor Bacon has a legal background perhaps he could look into this? I know we do not have the money but it would be worth while engaging a forensic accountant to examine the contract, the delivery of the contract, the so… Read more »
Vote Up00Vote Down
ThomasC
‘WHO THE HELL AGREED THE CONTRACT WITHOUT ENSURING THE CONTRACTOR COULD DELIVER?’ An executive team, 50% of whom is now contracting for Island Roads, who were running under a Conservative-led council. Why were they so desperate to see the contract delivered before the election, despite there being so many unanswered questions? I guess they needed another success similar to the schools re-organisation which they could call their… Read more »
Vote Up00Vote Down
Cynic
@ThomasC “WHO THE HELL AGREED THE CONTRACT WITHOUT ENSURING THE CONTRACTOR COULD DELIVER?’” Could a clue might be found in CV of somebody currently offering consultancy viz. “Advice and guidance to companies bidding for contracts, original and re-tender processes, to undertake work awarded by local and national government. This will include long term contracts involving complex money saving proposals for the client potentially resulting in re-structures and… Read more »
Vote Up00Vote Down
lardi

I have degree of sympathy with Island Roads in trying to surface roads in the dreadful weather of late. What I cannot understand is why they choose to resurface some areas which appeared ok, and leave heavily rutted and potholed roads untouched. Priorities seem skewed.

lardi,IR priority is to do the better roads first because they are cheapest to do. The IWC only has milestones(sic) in the contract, of so many miles of road to be resurfaced each year. IR priority is profit so get the cheap ones done first.

Recently an experienced cyclist hit a pot hole which flung him into the pathway of a lorry. He was killed. This was on the mainland . This may very well happen here. I live in Newnham Road, Binstead. The road is full of potholes which have been made worse by the weather. We are not due to have our road dealt with until 2017/18 .

Vote Up00Vote Down
Island Monkey
Has everyone forgotten what was promised when this wonderful contract was announced? They repeatedly told us that all of the Island’s roads would be ‘rebuilt’ and ‘maintained’ to a high standard. Bouldnor stabilisation apart, has anyone actually seen any rebuilding? What we see so far is resurfacing, and that is not always done to a good standard. The rebuilding element seems to have fallen by the wayside.… Read more »
Vote Up00Vote Down
iowjay
And lets not forget the Undercliff….yes it’s an area of landslip, there’s been a lot of rain. But it’s strange that the major road movement and slippage has only been where the road works were taking place – if you dig out one side of the carriageway to a depth of 10 feet plus, without shoring up the side that you keep open to traffic then you’re… Read more »
Vote Up00Vote Down