Letter: IWC must withdraw Crossways plan – town is at capacity

Peter Lloyd says the East Cowes has doubled in size and is unable to cope, with schools, doctors the dentist and drainage at full capacity. 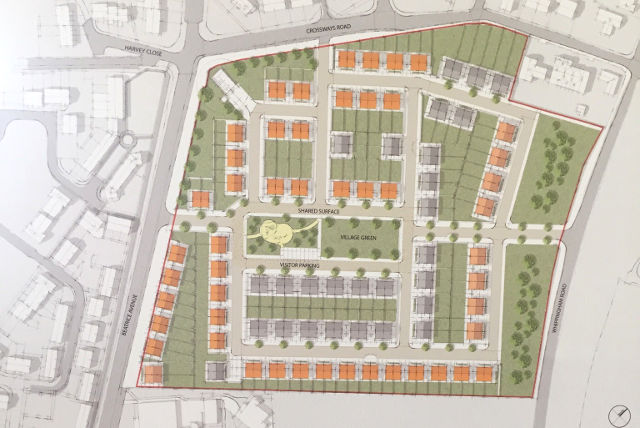 This from Peter Lloyd of East Cowes. Ed

The proposed number of  housing at Crossways has increased in a few weeks from 154 at the public consultation, to a possible 165 for outline planning permission.

Why does this administration seem to have a gung-ho, cavalier attitude when it comes to so called regeneration consisting of housing and yet more housing?  I know that the council’s income is tight, but all this administration can see are the £ signs, from the selling of assets such as the land to build houses, Section 106 monies paid by the builder and council tax income.

This has been proved with the unfinished Hawthorne Meadows development and other completed ones.

If you add up the housing developments that have been completed within East Cowes, plus the proposed developments including Crossways, Albany Road, Maresfield Road, the Phoenix and Trinity House marshalling yards and the possible Springhill / Norris Castle estate, then without exaggeration the number of new houses built in East Cowes since the start of the regeneration programme, would be the more than the turned down 2,000 homes of the proposed new village at Wellow.

The decision makers will not be affected by their decisions, but the people of East Cowes and Whippingham will be for ever more.

They need to understand the implications of this scheme and how their decision will affect the local area and the Island as a whole.

It will also increase the pressure on the Island road network and the Island’s Social Services.

Isolating residents
The building of housing pockets, such as Crossways, helps to destroy the local community by forming an isolated pocket of residents within the town’s community having an adverse impact on the town.

This outskirt of town housing will be of very little benefit to the East Cowes town centre and its vibrancy.  They will most probably head into Newport.

They are going against their own planning department’s Island Plan by building on a Greenfield site that is the last open field preventing the mergence of the settlements of East Cowes and Whippingham.

Building on this open space would destroy the ecology and environment that the site is now giving.

Filed under: East Cowes, Island-wide, Letter to the Editor, Planning

5 Comments on "Letter: IWC must withdraw Crossways plan – town is at capacity"

we can only hope but all IWC is £££££ – council tax revenue – dont give a hoot about the fact its a field – buffer between Whippingham and East Cowes – just the fact it will generate an income :(

Agreed. You can understand the temptation though when the Council’s funding has been slashed. But selling off land is wrong and not a long-term solution. Instead we need a decent government that would properly support local government instead of undermining it.

Vote Up60Vote Down
Rowan
And look at the layout! A ‘village green’ that’s way too small and broken into by car parking. Some of the ‘gardens’ look about a few yards long. But there are wasted ‘green’ edges at the north-west corner and a much bigger but unusable cosmetic wide verge along the road, where you woudn’t want to play games or sunbathe or pick food from any fruit or nut… Read more »
Vote Up100Vote Down
Steve Goodman
Bigger picture – we crashed through the capacity to support too many people consuming too much ages ago, and need to do a lot in a hurry to turn off the taps trashing the town, Island, country, and the only planet we have. Specifically dealing with development’s like this one; why would we need to do it before brownfield space becomes unavailable? Why wouldn’t it be built… Read more »
Vote Up6-1Vote Down
nickstuart
This development is a typical high density housing development with no support or infrastructure for the new people coming into East Cowes. It doesn’t even deliver the 2025 standards for zero carbon and removing fossil fuel supplies. We need high quality environmentally sound social housing; not this wrong place, wrong scheme green field development. The utterly ludicrous Council Regeneration plan that states new housing brings in Council… Read more »
Vote Up40Vote Down