Letter To The Editor: Occupy Isle of Wight General Assembly

The next Occupy IOW General Assembly will be meeting in St James Square in Newport on Saturday at 1.15pm

This press release in from Occupy Isle of Wight about their next meeting, in their own words. Ed 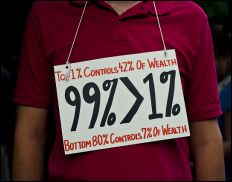 The next Occupy IOW General Assembly will be meeting in St James Square in Newport on Saturday at 1.15pm.

This is a chance for EVERYONE, the 99%, here on the Island to come together to work towards positive, constructive ways of tackling the very real problems facing Islanders.

If you have ideas or suggestions as to how the movement can affect change for Island people then please come along on Saturday and make your voice heard.

Direct democracy
The process of direct democracy is used within the movement to ensure that everyone’s voice can be heard. There is no hierarchy, everyone works together to come to decisions through consensus.

Although this can be slower, because it’s not top down, decisions being voted on are stronger. When decisions are made by the Council, or government too often people don’t feel that their view is being represented, but through direct democracy at a general assembly you can have a real say.

Key points of discussion will be:

We want Island people to feel empowered to make little changes together to make a big difference. We aim to provide real alternatives that we can take forward to our representatives in the Council and in Government, and for the Island to be the tiny ember that sparks the fire of change.

11 Comments on "Letter To The Editor: Occupy Isle of Wight General Assembly"

An interesting documentary to watch.

Vote Up00Vote Down
biggmarket
Forgive me but I hope one idea is that we as individuals and Governments do not borrow so much money they/we are in no position to pay it back. Thankfully our interest rates remain low. I look forward to the stop the cuts alliance/anti biomass plant/occupy the Isle of Wight(strike out which does not apply)explain where the money to achieve their aims is coming from othet than… Read more »
Vote Up00Vote Down
playingthenumbers
A little bit of history should tell you that financial disasters & recessions are regrettably, routine occurrences. History should also tell you that the escape plans are the same â€“ governments, central banks borrow or print money to prime the economy. For example, during Americaâ€™s new deal programme during the 1930â€™s the gov directly employed 1 in 3 of its unemployed citizens for all sort of public… Read more »
Vote Up00Vote Down
playingthenumbers
You should be right to worry about interest rates; we are in the foothills of an undeclared currency war. One should also remember that 80% of our national debt is owed to the British people. Not to overseas investors & the gov holdings of foreign cash is worth around $1tn + one should add to that several Â£tn worth of other overseas assets. Weâ€™re cash poor (deficit)… Read more »
Vote Up00Vote Down
Christian Beasley

Vote Up00Vote Down
adrian nicholas
If you mean ‘borrowed’ money? then you must mean contrived US Fed reserve, ECB and IMF promisary notes given in QE 1, 2. and new 3?(and projected EU/IMF bond issue against Greek default). Also,given that the banking debt of 2007 occurred because of apparently ‘infallible’ growth based on matchmetical and physical dyamic equaltion and calculations applied to creating financial instruments post 1987 de-regulation- That co-incidently also allowed… Read more »
Vote Up00Vote Down
biggmarket
All very good, worthy and noble. This new world order you are seeking has yet to be invented/created. Experiments in countries like Cuba, China and North Korea haven’t exactly resulted in prosperity for all. I suppose my main gripe is the movement’s cliam to be representing the 99%. Today’s Maths Questions 1. How many people came to the last meeting? 2. What is the adult population of… Read more »
Vote Up00Vote Down
playingthenumbers
Ah noblesse oblige indeed, I didn’t think anyone remembered that anymore, so thanks for pointing it out. Perhaps you should remind the 1% or maybe Occupy could adopt it as a motif. You’ll have to do better than compare completely differing countries & economies too. China & Cuba, 1 a small little island surrounded and under threat from its enemy with only cash crops going for it… Read more »
Vote Up00Vote Down
Esther Cowsley
I think you have misunderstood the meaning of 99%. We are the 99% is symbolic, and stems from simple maths. 1% of people globally hold around half of all the wealth, while the other 99% share the other half. Therefore unless you are a multi millionaire you are statistically part of the 99%. As it says above the consensus process allows everyone to have a say in… Read more »
Vote Up00Vote Down
adrian nicholas
No big market – the alternative is not n.vietnam or cuba and the current China owes more policy practice to globalist political free market liberalism(see R,Reagan , speech on China and emergent free market liberalisation in 1981) with exactly the same rule and policy self interest by a self-selected technocratic elite consolidating their own social and political advantage at expense of the general population. If you see… Read more »
Vote Up00Vote Down
Jay

keep reading these to late so another one missed sorry