If you fancy a night in watching a DVD, then take a look at the selection available at Island Libraries. At just 98p per night, they’re a great bargain. Ed 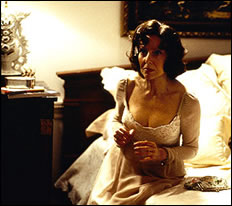 The work of cinematic films is not always a case of impressive budgets and special effects, sometimes there is an intimacy with the viewer that of all directors in America, Woody Allen genuinely seems to achieve, there is a great deal more in 90 minutes here than other film-makers achieve in a lifetime.

‘Small Time Crooks’ is a film that allows Allen to appear as the lead character and is more apparently slapstick funny with some excellent and at times, admirable writing that seems to suggest that when he focuses on comedy directly, he simply cannot be beaten.

This is a simple enough comedy that concentrates on the idea that material wealth cannot bring happiness to people as much as people can. Yet it does make its points very casually and very well.

Sadly, it has been 9 years since the original release of what could by all accounts be the last appearance in front of the camera by a true cinematic genius.

‘Small Time Crooks’ is not perfect by any means but it does show to an audience that grew up watching Woody Allen films that very few comedians could really be so insightful and make people laugh at the same time.

I loved this film – just might get it out again as I could do with a laugh!