Dave reports back from his meeting with officials at the DCMS

Following the meeting between library campaigners from the Isle of Wight and officials from the DCMS yesterday, Dave Quigley has sent this report. In his own words. Ed 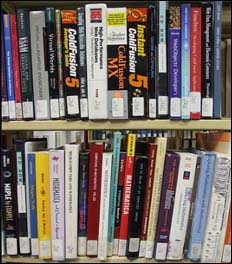 When we received the invitation to visit the DCMS, having heard comments from some of the other groups who had been, we were not sure quite what to expect. What a surprise awaited us, unlike our local authority, the DCMS officers actually wanted to listen to us.

The meeting started at 12 noon and we were told it must be restricted to 1 hour! The DCMS staff involved were two senior officers from their libraries department and one of their lawyers.

On many of our points they not only listened and took copious notes, they also encouraged us to elaborate. The meeting eventually finished at 1.25.

DCMS impressed by standard of submissionsWe made two submissions of our own and also handed in three others including the Bembridge Library User Group’s very well produced document.

They seemed impressed by the standard of all submissions and were amazed by the number of supporting emails and comments taken off-line from VentnorBlog.

They accepted several hundred pages of documents from us for their consideration before advising the Minister.

No decision yet
We knew before we left the Island that we would not get any decisions from them at the meeting, we were told that none of the other groups that have visited before us have received any decisions either.

We were asked “Why have you not tried to discuss your thoughts and ideas with the IWC?” They seemed surprised when we informed them that the council on the Isle of Wight, in our view, take decisions and will listen to no “interference” from their electorate. We used as an example the decision to close the Fire Control Room, which, despite widespread opposition from Islanders and from the FBU, there was not even a council debate and that it was a one-man delegated decision.

They seemed very surprised when they were told that it is regular practice for our elected representatives to make these “delegated decisions” that permit no debate in council. They were even more surprised to read a comment on one of the emails from a parish councillor who commented that in a meeting with one of the cabinet she was told that “no conservative councillor will ever vote against any motion in council from their own party, THEY ARE NOT ALLOWED TO, they may only abstain” So much for democracy IW style!

DCMS amazed at council’s rejection of alternative budget
In view of comments made by Ed Vaizey, Grant Shapps and the Prime Minister all reinforcing their views that library closures were not to be used as a first line cost cutting exercise but as a last line when all else failed.

The DCMS were amazed by the IWC’s failure to give any consideration to the three alternative budgets which could have saved all the libraries, public toilets and TICs, in fact they had been unaware of the cuts being made to the tourism infrastructure as well as the libraries. They also could not understand the council’s reluctance to consider sharing CEOs or combining departments.

Overall we feel that the effort of putting our submissions and very large files of documentary evidence together, and actually getting to London for the meeting were all fully justified and we are quietly confident that justice and common sense will prevail.

We must also express our thanks to Andrew Turner and Carol Dennett for their efforts on our behalf is setting up this meeting.

Image: Jeffrey Beal under CC BY 2.0

This is excellent news and proves the Tory council have been using a sledgehammer to crack a nut. Well done Dave and the group!

Excellent wide-ranging submission which gets to the heart of the problems. Must have opened a few eyes at the DCMS. I endorse your gratitude to Andrew Turner and Carole who were very helpful with our own Bembridge contribution.

I’m so pleased you and your people got the attention you deserve and were actually listened too. It’s not just the libraries but toilets, TICs, fire control, the educationally disadvantaged and now police stations. Where will it all end? I just hope David Cameron gets the measure of this worse than useless bunch before they cause more damage.

Vote Up00Vote Down
Mike Starke
Well done to the library campaigners and their supporters. This justifies all the tireless work that is being done by everyone connected to the Stop The Cuts Alliance on the Island. One thing that struck a chord with me from my own campaigns over the years was the expressions of amazement from outsiders about actions of County Hall here on the IW. We should never forget that,… Read more »
Vote Up00Vote Down
Loo Loo

I hope the County Press will make this a major story although I will be surprised if they did.

Vote Up00Vote Down
Paul Miller
Good Show, It seems that national government types don’t get-out-and-about as much as they did and this has been a real eye-opener for them. Let’s hope the next thing we hear is along the lines of: “In connection with the recent disappearance in the Channel of a functioning administrative county with 140,000 passengers aboard, contact has finally been established with the bridge from our Fire Control Room… Read more »
Vote Up00Vote Down
BigEars

I don’t suppose the Library campaign team mentioned that the IWC had, however, found a spare couple of million pounds to fancy up the sports centre in Sandown.

Hi Big Ears, no, not specifically, however did did stress just how much they have maanaged tto find for hair brained schemes whilst closing front line public services. A whole range of their thoughtless wasteful schemes were mentioned.

It is a PR stunt!We are host to this years Island games,to host it again in future years some commitment has to be seen towards sports.None of the officals have a reason to look in a library,TIC or public toilet.

Wabbit, you are right again. You can be sure that this bunch of knuckleheads only spend a little extra when they believe it will show them in good stead. They just treat us all as idiots, when if they want idiots they only have to look in a mirror. They just have not got a clue.

This is excellent news, I will await the outcome with interest. Hopefully it will be another nail in the coffin of the discredited unpopular Isle of Wight Council!

Actually ‘god’ sounds about right too!!

Vote Up00Vote Down
Stewart Blackmore
I applaud everything that Dave and his colleagues have done to highlight this disgraceful Council’s shabby treatment of Islanders and the illegal closure of our libraries. We can only hope that Islanders finally wake up to the reality of this Council and get rid of them at every opportunity, starting with the Binstead and Fishbourne by-election. Let us also hope that Geoff Lumley’s initiative, highlighting the Council’s… Read more »
Vote Up00Vote Down
daveq

add to that “No right to govern us”

Vote Up00Vote Down
Asite2c
If I’m correct, cuts to the IOW Council budget should have been about 8 million pounds. The council are cutting the budget up to 19 million and using the excuse of cuts to Government grants. It would appear from these figures that 11 million pounds have gone missing from the council budget. If this is true then the issue needs to be looked into by having an… Read more »
Vote Up00Vote Down
daveq

Until meeting your group, perhaps officials in the Government had little knowledge about the questionable and stupid decisions being made by the IOW council and are a bit taken back by the information you have produced.

I only hope these officials will take it seriously and look into the council’s financial affairs and decisions.

If the DCMS officials come out in favour of the library group and accept the Island is being run by a leader of a council that are incompetant and wasteful, Pugh’s ambition of becoming a future MP could end up becoming a dream.

If Pugh don’t become an MP and gets booted out at the next local election, he will have to join the people at the Job Centre he and this Tory council have made unemployed or go back to Beardsalls and sell brown envelopes.