Huge respect must go out to the crews of all cross-Solent ferries for their sterling effort yesterday during the storms. 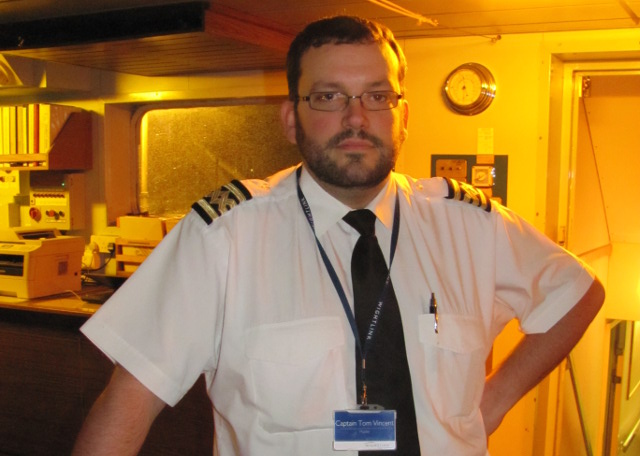 There was one point last night when no ferries were able to run due to the weather, but then Wightlink decided to run through the night on a trip by trip basis. This in from them, in their own words. Ed

Wightlink Ferries kept on sailing to and from the Isle of Wight on Valentine’s night 2014.

Captain Tom Vincent (an experienced Captain in his first year as a Wightlink Captain) and the crew of the St Faith braved the worst of the winds gusting at more than 70 miles an hour and carried more than 700 passengers across the Solent when all other ferries had stopped running.

Ferry held in the Solent for two hours
Earlier in the evening, another of Wightlink’s ferries, the St Clare was forced to wait outside Portsmouth Harbour for two hours at 7.30pm because conditions were too difficult for her to enter the port. St Clare then took her passengers back to Fishbourne and tied up there.

Captain Vincent and his crew then came to the rescue and managed to take the passengers back across the Solent, mooring safely at Portsmouth’s International Ferryport, further into the harbour, before resuming overnight sailings from Wightlink’s port at Gunwharf.

Listen to Captain Tom talking about the experience

Thank goodness that WL’s professional sailors are more competent that their business managers. Lots of Brownie points to WL officers and crews for their skills in keeping us safe in this terrible weather!

Yes, I’m surprised they are able to keep so much of the service going.
Anyone else finding that ‘What Readers Say’ is much shorter-to-view nowadays, so I’m not getting such an overall view of the range of posts as before, and there’s a lot more clicking to go thro it? I’m sure there are also some good reasons for changing it, (unless it’s just me!)

@Tryme
The range is still the same.
Plenty of response to irrelevance, some glib quips on important issues…and silence on the most important ones of all.

And as the winds start to dissipate and the water begins to recede, the laser beam of focus will shift to festival ‘season’ and a continued peppering of division from the sniping ranks. So it’s much the same, it just won’t look as apparent.

Yes peaceful_life, it does make one question the Meaning of Life if one is swept around by the currents and eddies of media interest. Your consistency shines out against this.

Meanwhile, anyone else see what I mean about WRS?

@tryme “Yes peaceful_life, it does make one question the Meaning of Life if one is swept around by the currents and eddies of media interest.”

You are right it is difficult to navigate between the”rock” of Truth and the “whirlpool” of media spin.

WRS? Not a problem I have noticed.

Thank you for responding, Cicero, I was beginning to feel invisible! It’s not exactly a problem, mainly just different, and I wondered if it was a deliberate change or just the product of my own set-up. Seems like the latter then. Cheers.

‘this terrible weather’.
The ‘weather’ due to climate change?

@PL The query mark at the end your comment could well be significant! :-))

@Cicero.
In terms of posterity, yes. Other than that, it wasn’t rhetorical.

Vote Up00Vote Down
Black Dog
Following Councillor Lumley’ comments at the open meetings with the ferry companies about Wightlinks PR, they have taken that on board and now arrear to be in overdrive with their feel good messages. This does not take anything away from the professional crew who deliver cross Solent services day in and day out, irrespective of who the operator is. Wightlink’s claim that 1 in 3 ferries run… Read more »
Vote Up00Vote Down
tryme

Ohhh! I was expecting to hear the sounds of a 70mph storm at sea! Never mind, it set off my imagination – almost as good.

They gave up running from Lymington at 3pm, friends waited in the port until gone six with no offer of either a crossing or transport to Portsmouth.

Some Wightlink crews did good work, others had an early finish?

As ever, Wightlink’s communication was diabolical.

The Crews did well, did Wightlink give them a big bonus?