Broc Silva has been doing hours and hours of back-breaking work pulling litter from hedges and roadsides. But it appears the Isle of Wight council have missed the point of his recent witty additions to the piles of rubbish collected. 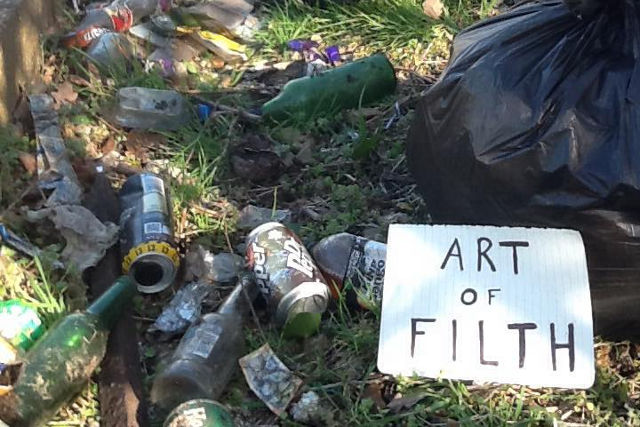 Broc Silva has been a ‘man on a mission’ in recent months, working long, hard hours picking other people’s rubbish out from hedges, roadsides etc in Newport.

Bags and bags of rubbish collected
So far he’s worked his way along the dual carriageway, by the underpass to the College, Hunnyhill to Medina, Carisbrooke, the banks of the bridge by LIDL, as well as Lukely Brook (Sainsbury’s).

He’s collected bags and bags of rubbish, but it appears the Isle of Wight council (and in Broc’s view, the County Press – see their latest article about him) have missed the point of his recent humorous additions to the piles of rubbish he cleared.

He decided this time to leave the rubbish on show in a pile – with the intention of shocking passers-by – and added signs such as ‘art installation’, ‘materials supplied by the public’ and ‘the art of filth’.

IWC: “Fundamentally a flytip”
However, the IWC posted the following statement on their Facebook page yesterday, saying it has been treated as flytipping – something that is a criminal offence.

While we support community art, unfortunately this ‘installation’ contained loose refuse on council land. It was installed close to a waterway and could have caused significant harm to the wildlife.

While it seeks to make a statement, it is fundamentally a flytip and has been treated as such. Our team returned the site to its usual pleasant state for people to enjoy over the weekend.

“Psycho lunatic dumps litter bags in street”
In response, as a man with a sense of humour, Broc posted the following message to Facebook:

Breaking news: concerned citizen removes litter so the Isle of Wight countryside is 3 bags of rubbish cleaner,
or, the county press version…
Psycho lunatic dumps litter bags in street where innocent humans might injure themselves, police seek man with stupid haircut in connection with this heinous crime against humanity

He was paraphrasing of course.

“I’m glad it’s causing a bit of interest, hopefully it might kickstart a positive response from Islanders and a change in attitude.

“The most shocking thing is that this is caused by island people, their children, students… I have no idea how we’ve come to this so quickly but some of the cans have been there for years.

“I understand the council having to remove the litter once complaint is made. I was planning on doing it on Monday anyway.”

Support from police officers
Broc went on to say that when he was clearing the rubbish on Medina Way two police officers stopped to chat to him and said they’d seen him on Facebook and “were behind me”.

If you see Broc out and about pulling litter from hedges, give him a pat on the back and a helping hand [thanks Lisa Warder for the suggestion].

Writer and poet
Or better still follow this link to see Broc’s collection of books and poems on Amazon.

Perhaps buy two or three (there are Kindle editions as well as paperbacks) of them to show your support.

Yes, he’s not just good at picking litter, he’s a writer and poet too.

Examples of recent clearances
Below are photos of some of the areas Broc has cleared in recent weeks, all off his own bat.

Thanks to one of our councillors, Matt Price, Newport & Carisbrooke Parish Council has an agenda item for our meeting next Monday evening to positively recognise what Broc has been doing.

Vote Up220Vote Down
Steve Goodman
IWC response to volunteer litter clearing hero Broc Silva doing a lot of the work they should be doing; describing Broc’s temporary collection of cleared trash as fly-tipping, and stating that his “Fly-tipping is an unsightly and damaging crime that leads to the degradation of our beautiful natural environment here on the Island.” IWC response to everyone recognising the most serious degradation of our beautiful natural environment,… Read more »
Vote Up30-2Vote Down
Benny C
Broc you’re a hero. I do this regularly along the beaches and paths and in the villages of the southern coastline. I love doing it because it makes a real difference, helps wildlife, etc and people recognise that and stop me to say thanks. I just tell them they could do the same. ‘Recognising’ Brocs work is shamefully hollow on its own. Get out there yourselves, use… Read more »
Vote Up17-4Vote Down
lifewriterbutmainlybeer
‘It was installed close to a waterway and could have caused significant harm to the wildlife.’ Perhaps it does more damage to wildlife strewn on verges, hedges and in ponds, where the wildlife lives? The council have now removed it from its ‘collected’ position. That is a welcome positive. The minimum fine for litter thrown from cars is £65; the maximum £150. (BBC News Oct. 2017). ‘Under… Read more »
Vote Up60Vote Down
nyeve

Fly tipping? I hope no flies were hurt in this operation…

I’ve got a lorry load of maggots here. If I leave them in a public space, would that be Fly tipping? lol