Red Funnel announce next craft to be Isle of Wight built: Live coverage

Follow the announcement live, as it’s made, by Red Funnel this lunchtime. We’ll be reporting live and streaming live video. 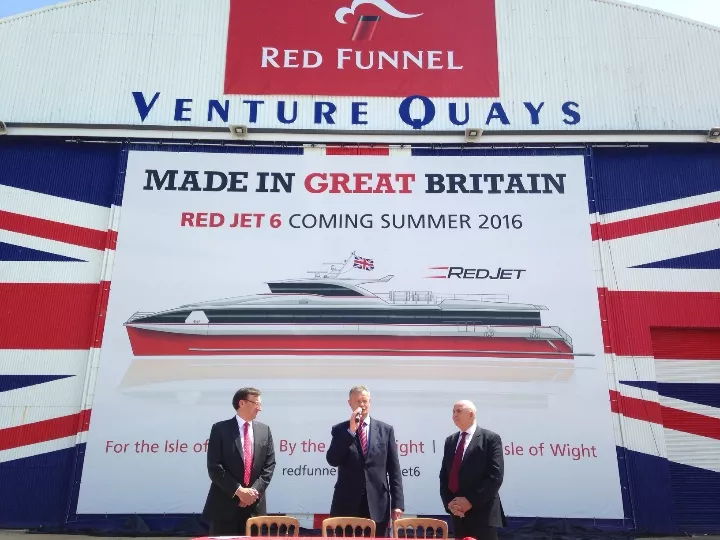 Summary of the announcement:

Red Funnel, one of the three cross-Solent ferry companies operating between the Isle of Wight and the mainland made an major announcement today at 12.30pm.

Members of the media gathered together to hear the news and OnTheWight covered the announcement live, so readers heard about it the same time as the media.

The full details are available.

Interview: Mark Slawson, Red Funnel
Marks interview had an interuption, so is split over two video.

Live text updates
The updates that appear below will automatically refresh in the page. Items in double brackets (()) indicate comment from the author.

Update 15:11 Separated the videos out.
16:06 Added summary to top. Changed tense from future to past

22 Comments on "Red Funnel announce next craft to be Isle of Wight built: Live coverage"

What are Wightlink going to do to bring Ship Building back to the Island?

The only vessel Wightlink is after will be a two deck car ferry, there’s no-one on the Island with that capability or experience.

Good that it will be island-built, and that there will be more room for bikes.

WELL WELL… a nice move by Red Funnel and one very much appreciated by me! It’s not often I say this but…. Well Done Red Funnel!!!! Now please keep to your word!

Vote Up00Vote Down
mat
The investment in skills and manufacturing has to be welcomed.Commercial boat-building has to one day fully return to the Isle of Wight has part of the struggle to increase the manufacturing base. The strategic goal of marine engineering has been part of the Trades Council’s work and aim for some time. Red Funnel has benefited from the hard line approach of Wightlink under the ownership of Macquarie… Read more »
Vote Up00Vote Down
Stewart Blackmore

Credit where it’s due to red Funnel with this very good news and skilled employment opportunities on the Island.

Nothing long term though?

Now, if they were to start buying produce locally to serve aboard their vessels, it would be a start.

It seems 3663 or Brakes are a more attractive proposition :(

Excellent timing. This announcement today and tomorrow they announce their plans for the new East Cowes terminal.
Is this a case of the good news first?

Good news, but we have had promises like this before, the jobs wont last if new orders don’t come in.

Still, it’s better than Wightlink’s commitment to Croatia when they ordered 3 new ships.

I don’t quite see how this benefits the motorists, no improvement in the frequency of vehicle ferry sailings, particularly in respect of the totally inadequate night time services

Had you not noticed Tim? The highly profitable ferry companies don’t operate boats for our benefit, they run them for their own.

A nice little earner it is too.

eh?! Pray tell what commercial company, large or small, operates for the benefit of the customer? They don’t, they are there for the shareholders, partners & owners.

That said, well done Red Funnel any help this Island can get is gratefully received.

The old begging bowl eh, yeah, that’s the Isle of Wight for you.

A highly profitable mainland company makes most of its fat juicy profits 365 days a year from you, and yet you’re all very grateful when it deigns to build ONE single boat locally putting a tiny sum back in to your economy.

Vote Up00Vote Down
calderjon
You know, I thought the same thing. What a ridiculous “announcement”. The creation of jobs is fantastic but this is short term and clearly convenient in many ways for Red Funnel. It’s not about giving anything back to Islanders or investing in our economy. PR exercise made even more evident by the fact that the announcement was hyped to high heaven. With so many missed opportunities to… Read more »
Vote Up00Vote Down
Wighton

Please don’t raise the ferry fares to pay for this though – I hope that it’s already “paid for”. Very pleased that the island got the contract.

Yes please, we are very grateful indeed that we’re getting a new boat, and will happily pay more for the pleasure of travelling on it.

Vote Up00Vote Down
Highway to Hell
Oh dear. Someone or other wants to offer jobs to people on the island. What a daft idea, we all know working for a living is simply not cricket these days, I mean these ‘working types’ would have to spend their wages with local businesses and that simply isn’t on! What we should do is discourage those who may wish to do this ‘work’ thing and only… Read more »
Vote Up00Vote Down
Reg

As Tebbit said ‘On your bike’Now who promotes this?

Maybe they are available for the next local media photo call?Let’s wait and see?

Quoted in past by OTW ‘As the usual suspects’ least ‘The Krankies’ tried to make us laugh.

You think keeping up with local news and having a voice is something only the unemployed do?

Also “we all know” ? Speak for yourself.

To make things clear,I am not talking about the unemployed.