Owners of the cottage the footpath runs in front of objected to the Planning Inspectorate, but they dismissed the appeal, stating Ordnance Survey map evidence as far back as 1908 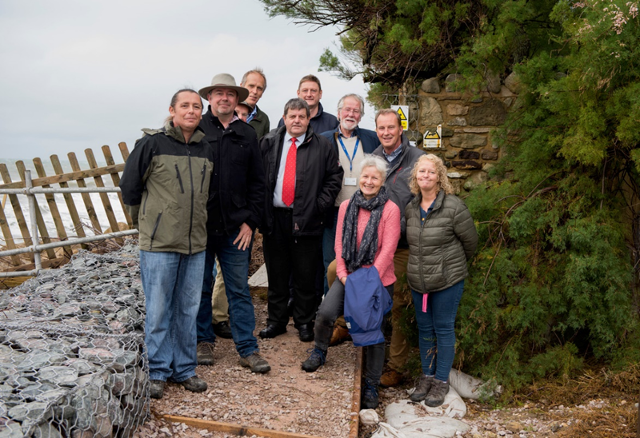 A battle lasting several years about a coastal footpath along the sea wall at Castlehaven in Niton, came to a conclusion this week when the restored footpath was finally re-opened.

The owners of Beach Cottage, the property next to the Village Green, had raised objection to the NT46 footpath running along the seawall directly in front of their property. They argued in an appeal to the Planning Inspectorate that it should “be recorded over the foreshore”.

However, the Planning Inspectorate explained that doing that would involve the deletion of a section of footpath and the modifications would lead to footpath NT46 running along another route.

Evidence from long-standing residents
The footpath was recorded as far back as 1950 as running, “along the top of the sea wall in front of Beach Cottage”. Evidence from many older residents in the village was given including:

Privacy and security appreciated, but not relevant
The Inspector went on to refer to evidence of double-pecked lines on the Ordnance Survey map from 1908.

He dismissed the appeal and said,

“I appreciate the appellants concerns about the locality of the footpath and how it impacts on their privacy and security. However, such matters are not relevant to applications made under the 1981 Act.”

Hard work by all involved
The Isle of Wight council’s Rights of Way team, along with Niton and Whitwell Parish Council, Gift to Nature and the Niton Harbour Club, have all worked together over many years to ensure the restoration of the NT46 footpath.

The restoration of the Village Green is the first phase in a long-term plan and Gift to Nature have added the area into their portfolio.

“Castlehaven Village Green is the newest site in our Gift to Nature portfolio and has some of the most stunning views.

“We realise how important it is to local people and visitors and have enjoyed working with Niton and Whitwell Parish Council to enhance its appearance.”

Further details can be found on the Parish council Website.

…drum roll for Councillor Stewart who had precious little to do with the hard work put in by many worthy folk mentioned in the article but nevertheless he boldly and selflessly stepped in at the end, successfully taking centre stage in the photo.

You forgot to add “once again”. He looks so out of place it’s untrue. Could do with a few walks along the path by the looks of it though!

Maybe we’ve found out where all that expenses money went….

Which was the cottage that they were running drug smuggling out of round that neck of the woods? Bet they valued their privacy. I think it was in Orchard bay.