Making It Easier To Indentify Wildlife

Thanks to Susan for sharing news of this new wildlife interpretation board. In her own words. Ed 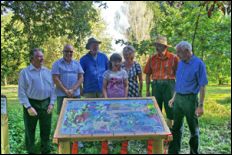 Water voles are just one of the nationally rare and endangered species that residents of Freshwater are lucky enough to have living on their doorstep.

Along with kingfishers, red squirrels and adders they are just some of the variety of flora and fauna that can be along the Western Yar and which are depicted in a new wildlife interpretation board located on the Freshwater Way.

The Freshwater Village Association held an unveiling ceremony for the new Wildlife Corridor Interpretation Board along the public footpath known as ‘The Freshwater Way’ on Saturday 1 October in the gardens of Seahorses B&B.

The board has been commissioned, designed and installed thanks to funding support from West Wight Landscape Partnership.

It beautifully depicts the diverse array of flora and fauna inhabiting Afton Marsh and the Yar Estuary, providing a pictorial nature guide for visitors and walkers to enjoy.

Its good to see another board like this made available in our countryside. They have importance for making those that walk this way, both more aware of what might be seen,and spotted, as well as giving information about what wildlife might be seen in our islands countryside.