Memorial Ploughing Match: Over £4,500 Raised On The Day (photo galleries)

We’ve got some great photos from the 2012 Memorial Ploughing Match that took place last weekend. Well worth a look.

Karen Sheath the organiser of the Annual Memorial Ploughing Match said this year’s event was the best yet, raising over £4,500 in donations on the day. 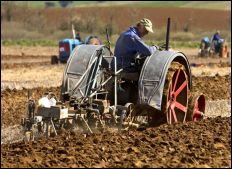 The first Memorial Ploughing match was held at Mottistone Manor Farm in 2009 in memory of four members of the Isle of Wight Traction Engine Club who had passed away the previous year.

This year’s event, held at New Wolverton Farm in Shorwell, attracted 90 entrants across the various classes.

More spectators than ever
It wasn’t just numbers of those taking part that had increased, the fine weather encouraged many more spectators with over 600 cars in the car park at one point during the day.

Details of the final amount raised for the Hospice will be revealed at the gala dinner on Saturday night.

Karen told VB today that they were still clearing up the site today (Thursday) which was kindly donated for use by Mrs and Mrs Williams.

Many thanks to Mary Crouch for sharing her fantastic collection of photographs from the day. Take five minute to flick through the three pages of images for both tractors and horse-drawn.