Re-Cycle Isle of Wight say Islanders have donated more than 250 bikes over the last year. 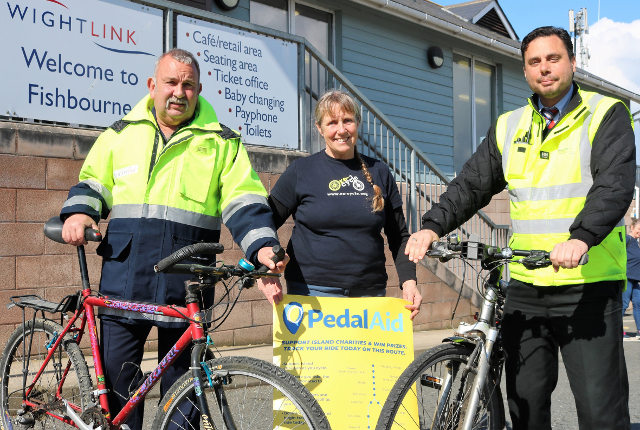 Hundreds of bicycles are to be given a new lease of life in Africa thanks to local charity Re-Cycle Isle of Wight.

For the ninth year running, Wightlink has provided free ferry travel to the charity which collects unwanted bicycles on the Isle of Wight and sends them to the charity’s headquarters in Colchester where they are sorted for suitability before being shipped to remote communities in Africa. The latest batch has been transported this week.

Bailey: Blown away by the generosity of Islanders
Sue Bailey from the charity says:

“These bicycles offer people a real route out of poverty by providing a means of cheap and sustainable transport to access work or education.

“We have been blown away by the generosity of Islanders who have donated more than two hundred and fifty bikes over the last year. Thank you to everyone who has supported us in our work.”

Re-Cycle Isle of Wight receives support from several Island companies, including InnerSpaces in Cowes which stores the donated bike and Bartlett’s Service Station in Newchurch which provides a van free of charge each year to transport the bikes to Colchester.

“It is a pleasure to help Re-Cycle Isle of Wight in its valuable work helping to connect people in remote locations through sustainable transport.

“We are always impressed by the dedication of the charity’s volunteers and are delighted to continue our support for them.”

The Re-Cycle Isle of Wight team is always happy to accept donations from Islanders. For details on how to get involved, please visit the Website or email  [email protected]

PedalAid’s chosen charity
The charity has also received a welcome boost this year after being announced as the chosen charity for PedalAid, a new phone app that allows people to raise money for charity as they cycle along the Island’s Red Squirrel Trail between Cowes and Sandown.

If enough cyclists take part, Re-Cycle Isle of Wight could receive £400 which would cover the cost of fuel for about four trips to Colchester. People can sign up to support the scheme by going to the Website.

Bailey: Unearth your bikes and get pedalling
Sue says:

“Collectively, cyclists have to cycle over 2,500km during April to trigger the award. So, we need lots of people to unearth their bikes from winter storage, and get pedalling.

“And of course, if they discover their bikes need replacing, they can donate the old ones to Re-Cycle: Bikes to Africa.”

1,5000 bikes left the Island
To date, around 1,500 bicycles from the Isle of Wight have been sent to Africa via the charity.

As well as helping African communities, Re-Cycle also supports people in the UK to learn new skills about cycle maintenance at its Colchester base.