Unwanted bikes sent from Isle of Wight to Africa

Having a bicycle can make all the difference in accessing work and education in rural areas. 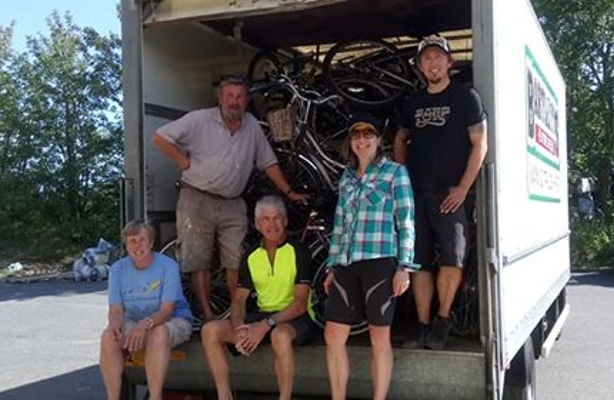 Seven volunteers from the Isle of Wight group Re~Cycle : Bikes to Africa spent a hot afternoon last month loading 128 donated bicycles on to a 7.4 tonne truck lent to them by Bartletts.

Having a bicycle can make all the difference
Local co-ordinator, Sue Bailey, said,

“These bicycles have all been donated in the last three months. That’s 128 individuals, and their families,  in Africa, whose lives will be positively impacted by the donation of these unwanted bikes.

“Having a bicycle can make all the difference in accessing work and education in rural areas. Not only that,  think of all those garages with more space now that the long unridden, unwanted bikes have been donated.”

The bicycles were taken to the charity’s headquarters in Colchester by two more volunteers.  One of the drivers, Neil Oliver said,

“We caught the 4am ferry, so it was a bit of an early start, but it did mean we missed the worst of the traffic on the M25 on the way there.  Coming back was a different matter, though!”

Money raised goes towards fuel
In April, cyclists cycling along the Red Squirrel using the PedalAid app raised £400 for Re~Cycle Isle of Wight.

“We used part of this money to pay for the fuel to take the bikes to  Colchester.”

In Colchester, the bikes are checked over and carefully packed into shipping containers and sent to one of the partner organisations in Ghana, South Africa, Zambia or the Gambia where local people refurbish them   and distribute them to people living in rural communities. Their website re-cycle.org has more information.

Don’t worry about condition of bike
At a local level, Sue said,

“We are always happy to receive unwanted, adult sized bicycles.  It doesn’t matter if they have flat tyres, need new brakes, need the gears adjusting or are a little rusty.

“All of those things can be easily remedied.  However, we cannot use them if they are totally seized up and rusted through.  Nor, sadly, can we transport children’s bicycles.’”

“The staff at Innerspaces are very helpful.   They accept the bikes on our behalf and store them, free of charge, until we have enough for a truckload.’”

So, dig out your unwanted bicycle and change a life in Africa.

News shared by Sue Bailey of Re~Cycle:Bikes to Africa. Ed