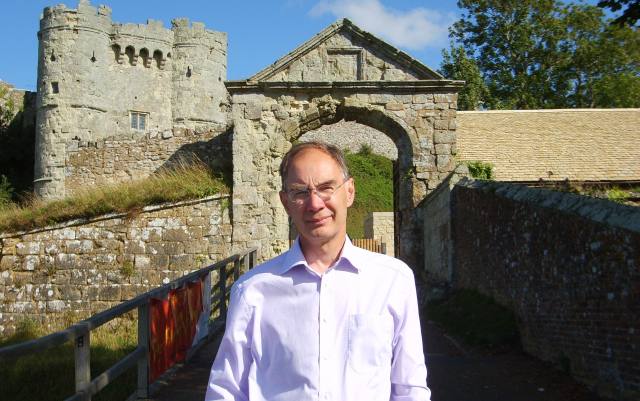 “Given that Mr Wardrop has taken almost three months to reply to my letter and has been chased a number of times, this response is pretty poor.

“What is most troubling is that he thinks Islanders will be fooled by his failure to give straight answers to straight questions.

Regarding the proposed asphalt plant on the River Medina – he says on the one hand that Eurovia ‘are firmly of the view that it is needed’ and then goes on to agree that there is ‘no requirement’ for it.”

PFI contract
On the issue of whether meeting the terms of the PFI contract was dependent on the permission for the proposed asphalt plant, Mr Turner went on to say,

He doesn’t actually say whether the PFI contract can be fulfilled without an asphalt plant on the Island – which is the question he was asked. He has also failed to give clear answers to other points I put to him on behalf of local residents, such as whether he would move staff from elsewhere in the Eurovia Group to fill new local vacancies.

However, I am pleased to hear that any additional cost implications relating to asphalt being brought over from the mainland will not fall on taxpayers – either locally or nationally.”

“He is clearly misrepresenting my comments”
On the subject of developing brownfield sites, Mr Turner went on to say,

“I have said in the past that that new housing should be located on brown-field sites (where development has taken place in the past), before undeveloped land is used. Mr Wardrop says those comments suggest that I should be supporting Eurovia’s inappropriate proposals for this sensitive site on the River Medina.

“He is clearly misrepresenting my comments and my views.”

Purdah has nothing to do private companies
Mr Wardrop had excused his delay in responding on the local election purdah period at the council. Mr Turner responded,

“Mr Wardrop also claims the delay in responding to me is due to the purdah period before the Council elections, when controversial decisions should not be announced by central or local government.

“He doesn’t appear to understand that purdah has nothing to do private companies. His press office even told my staff that MPs are not allowed to raise controversial issues during elections. That is quite obviously wrong!”

“I will be responding to this letter in detail when I have had the opportunity to consult residents who have raised these concerns with me.

In the meantime, if Mr Wardorp needs asphalt produced on the Island, I urge him to do the sensible thing and start talking to Bardon Vectis who have now received planning permission for a new asphalt plant on their existing site.”

newest oldest most voted
Diogenes' Barrel
How contemptuous of Mr Wardrop to delay replying to our Member of Parliament for three months on an inappropriate pretext. If this is how Eurovia treat the most important politician on the island, who represents the largest constituency in Great Britain ,what chance is there for ordinary local residents like WRAP and their supporters whom Mr Wardrop chooses to deride? We need to continue to object to… Read more »
Vote Up00Vote Down
Mike

I am not one of Mr Turners biggest fan (not that he will lose any sleep over that) but I am impressed with his reaction to this arrogant man. Lets see him apply the same diligence to the question of ferry services.

I’m still not a fan…he had ages to talk about PFI and the Islands worries, but failed to do so out of fear of his own parties Island Council.

How would it have been with a decent MP

Their response indicates that shoddy standards can be expected, lets hope this isn’t an indication of the standard of work they will carry out.

Vote Up00Vote Down
Happy Daze
You mention ‘Shoddy standards’ Bystander , well only this afternoon my lady wife and I walked along Sylvan Avenue in East Cowes to view the much vaunted Castle Copse. En route we noticed many ‘ shoddy standard ‘ LED lamps! These are the recently Installed award winning street lights. Why are they still on in broad sunny daylight many days after their erection? And why is all… Read more »
Vote Up00Vote Down
downwind resident
Have Bardon Vectis placed a contract for their new Amman Asphalt Plant at Blackwater Down and how long will it take to build and commission? When will Mr Wardrop realise that a 25 year contract is over a long time and that he should be trying to make friends on this island and not continue to antagonize everybody (except his alleged ‘good number’of supporters)? If Mr Wardrop… Read more »
Vote Up00Vote Down
kevin Barclay-Jay

ok so we I get it we are against an ashphalt plant on the Medina..this is a brown site listed for commercial development…..what employment creating business/industry (that is feasible) would we like to see there?

KBJ, given all the proof of the toxic legacy in the site, it would probably be best to seal it in permanently with concrete and perhaps make another park and ride for tourists?

Perhaps impregnate it with mycelium in an attempted study to clean it out?

Well done Mr Andrew Turner, thank goodness some one that has got a voice can eloquently put our concerns over to these people, Isle of Wight council WAKE UP.

I don’t think it was meant to be like this. Pugh was supposed to win the election, Beynon was supposed to remain spitting venom and this PFI, along with Wardrop’s flannel, weren’t supposed to be open to scrutiny.

Vote Up00Vote Down
downwind resident
Only yesterday the Secretry of State was quoted by the BBC as saying… ”We want to give local communities a greater say on planning, to give greater weight to the protection of landscape, heritage and local amenity” Eric Pickles Communities and Local Government Secretary This was stated in the immediate context of windfarms but a principle is a principle! Nothing about supporting multi nationals to make even… Read more »
Vote Up00Vote Down
baz

Mr Turner quoted “he thinks Islanders will be fooled by his failure to give straight answers to straight questions”
Is that not what all MP’s do?

When will Eurovia bring out the ‘silent majority’ to speak up for them?!

I’m thinking we might be waiting for a while, or was this part of the job of the recent ad hoc Police-enforced census that was taking place?

Vote Up00Vote Down
James Luke
The people impacted by the Asphalt Plant are the residents of the neighbouring areas. I have no doubt that the majority of residents in those areas are opposed. Residents in areas not impacted probably don’t care. I suspect that Eurovia hope to influence those not impacted by the asphalt plant with the “if you want improved roads you need to support the asphalt plant” argument. I hope… Read more »
Vote Up00Vote Down
Albert Street

Let us hope that Councillor Stephens together with the environmental helth department put an immediate halt to this application.

Clearly the PFI contractors need locally produced asphalt and the sooner gheg negotiate an abreement with BV the better. This would depend on BV setting aside their greed believing it is a done deal and they can name their price.