MP Welcomes Crack Down On Bogus Migrants and Visas 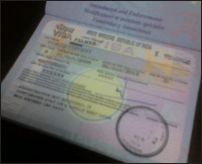 The Home Secretary, Theresa May has announced that the Government will tackle abuses in the system for student visas and migrant workers.

Speaking to the House on Tuesday, Mrs May described the need to stop the abuses, defend Britain’s world class institutions, and protect real students from poor quality, “bogus” colleges.

Mrs May reassured the House of Commons stating, “The message to the brightest and the best students around the globe is clear – Britain’s world class universities remain open for business.

“Legitimate colleges should still be able to recruit legitimate overseas students. But we need to stop the abuse and return some common sense to our student visa system.”

Previous Government allowed too many here
The Island’s MP Andrew Turner said, “It is clear that the previous Government made a complete mess of the system by allowing too many people to come here, both legal and illegal, and did nothing about it. Now, at last, we are tackling the problems. Many Islanders are concerned about the uncontrolled immigration that is changing the nature of our country. I will keep a very close eye on these promises.”

The main concern still revolves around immigration. The proposals aim to reduce the net migration from hundreds of thousands back down to tens of thousands, drastically cutting the numbers coming to the UK from non-EU countries. The majority of migrants arrive in the UK through the student route.

Abuse will be tackled
The Home Secretary has plans to tackle abuse of the system by non-EU migrants who come to the UK under the pretext of “student” and whose dependents accounted for nearly two thirds of visas issued last year.

The new proposals will:

Entry requirement will also toughen as students must be able to show:

Image: Curtis Palmer under CC BY 2.0

This must have been a very ‘hard’ issue for AT not to jump into with both feet.

It’s good job he doesn’t have to worry about the 400+ million EU citizens who could turn up at his offices tomorrow, completely legally, asking for directions to ‘benefit’ TICs.

Vote Up00Vote Down
JC
Yawn. Another diversionary tactic to deflect the voting population away from the rape of our public services. The immigration issue is always a winner with the Daily Mail and Express type who think that anyone foreign is subhuman. However, look at the guys who run the valet in East St in Ryde (Poles, I think). They work very hard and are doing a job no english teen… Read more »
Vote Up00Vote Down
Meursault

There are plenty more pressing things to deal with AT.

Vote Up00Vote Down
Lilly
Thanks again to Andrew for letting us know what his views are, makes it crystal clear on how to vote next time. This crackdown on visas etc. will have a direct effect on higher education and subsiduary outlets that employ many people in this country – cutting immigration at the expense of peoples jobs is lunacy. This country has been enriched by immigrants that worked hard, engaged… Read more »
Vote Up00Vote Down
Steephill Jack

“Many Islanders are concerned about the uncontrolled immigration that is changing the nature of our countryâ€
But it hasn’t changed the Isle of Wight much, apart from a few Jutes still hanging around.

Aye, but what have the Jutes ever done for us, eh? Apart from garden twine. Coming over here with their fancy long boats, taking our jobs and women. What would the blessed Diana say?

Vote Up00Vote Down
Steephill Jack
The Jutes resisted Christianity and kept the Saxons away until the Island was invaded, annexed to Wessex and forced by the sword to become Christian. It was ethnic cleansing of the worst kind. The Jutes may have failed in the end, but they resisted. And don’t forget that taxes came in with the tithes (10%) to support the Christian church. It has been downhill ever since. I… Read more »
Vote Up00Vote Down
No.5

and he would’nt have been able to move here after he failed to become an MP in the Midlands…another Mainland reject ( just like me..before anybody comments :) )

Vote Up00Vote Down
Steve Goodman
I am reminded that we will soon be paying for twice as many parliamentary representatives. Will the sevice improve, I wonder… In January AT said he would reply to my questions; I’m still waiting, so I must have asked the right questions. The following is a copy of a letter I sent as a result (initially to Private Eye), which I think is self-explanatory. Date: Thu, 20… Read more »
Vote Up00Vote Down
keithybaby
I’d rather the Government targeted the big firms that use our cheap high street workforce and take our consumer spending but then avoid paying tax in the UK. Just what do they do for our society? We’re talking big household names, not back street crooks. Let’s have a return of UK tax paying companies to our high streets and close all UK controlled off shore tax havens.
Vote Up00Vote Down
lilly
I noticed on the news last night Nick ‘dropped a clegg’ leaving his mike on so we caught his chummy words to Cameron about not having anything to debate, they’re on the same wave length (just in case you hadn’t noticed already). Old news that they share so much in common. They were being filmed in ‘Boots’ another of our lovely tax evading high street shops. UK… Read more »
Vote Up00Vote Down
ABC

Knowing Andrew Turner’s views on foreigners coming to work and live in the UK, there is a shock headline on the Gazette website today. It reads: ISLANDâ€™S MP WELCOMES MIGRANT

What’s this, our xenophobic MP has had a dramatic change of heart? Unfortunately not so because when the story is ‘opened’ the full headline is revealed – ISLANDâ€™S MP WELCOMES MIGRANT CRACKDOWN