Having battled violent storms of thunder, lightning and torrential rain whilst sailing through several Scottish Lochs, Natasha Lambert, who lives with athetoid cerebral palsy, has climbed the 4,080ft Mount CairnGorm, as part of her latest challenge. 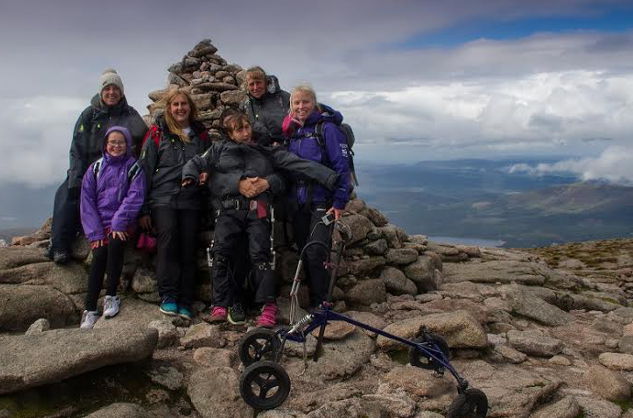 Natasha has athetoid cerebral palsy and uses only her breath to control her specially-designed 21ft yacht called Miss Isle Too. Her latest challenge has seen her sail from Inverness to Glasgow. The sail took her through the Caledonian and Crinan canals and some of the most spectacular waters in the UK.

Scaling Mount Cairn Gorm
Not content with pushing herself to her limits on the water she and her team have also started scaling CairnGorm Mountain, the sixth highest peak in Britain. For this part of the challenge Natasha swapped her wheelchair for her “Hart Walker” a stable device which she can propel forward, despite having limited control over her movements.

Update: She’s done it!
Natasha reached the top of the CairnGorm Mountain, in the Scottish Highlands, just after 3pm on Monday 25th July 2016.

It took her just over five and half hours to reach the summit which is some 1245 metres above sea level, the sixth highest mountain in the UK.

Supporting the charity
Natasha, and her team, are undertaking Sea and Summit Scotland to raise funds and the profile of her charity, the Miss Isle School of Sip Puff Sailing. Natasha is keen to ensure that others with similar physical conditions are inspired to face new challenges and, if they would like to, get on the water and start sailing.

Find out more about Natasha and the work she does for the Miss Isle School of Sip Puff Sailing by visiting the official Website. An incredible achievement by an inspirational young lady with an indomitable spirit.
Natasha, I salute you!