New playground for primary school thanks to volunteering scheme

The children are delighted with their new playground which was designed and created as part of the Island Roads volunteering scheme. 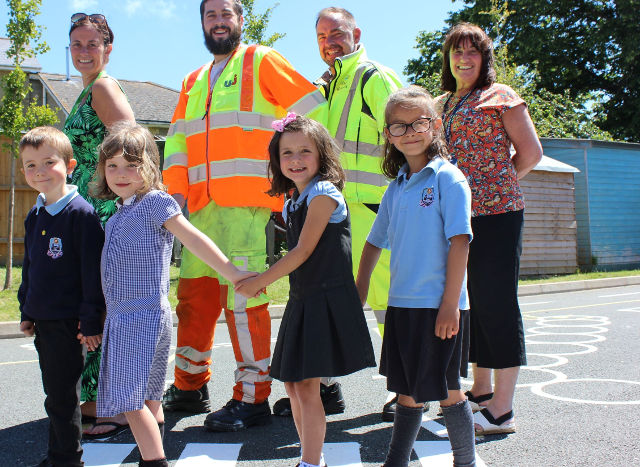 Island Roads has been given top marks after creating a new activity area at the Bay CE Primary School in Sandown.

Island Roads with its line-painting partner WJ South West have marked out a series of activities at the school following a request for help by The Bay’s Parent/Teacher Association (PTA).

Complex design
The area was designed by Island Roads lining supervisor Spencer Jarman, who also has a daughter Sienna, five, at the school and painted by Dan Jacobs and Michael Taylor from WJ South.

The complex design features games as well as learning and road safety teaching aids. It includes a large caterpillar, two 100-square grids as well as hop-scotch and some miniature road markings.

Volunteering scheme
The work was undertaken as part of Island Roads’ volunteering scheme in which staff are encouraged to take two days paid leave a year in order to support community projects.

Spencer was approached by Lorna Cotton chair of the PTA which had wanted markings put down on the playground, but had neither the expertise nor the funds to undertake the project.

“I approached Spencer during a school event and asked him whether there was anything they could do to help.

“Spencer said it might be possible to do something through Island Roads’ volunteering scheme and we are thrilled with the work. We feared we might have to start a long fund raising campaign but to get it done free of charge was amazing.

“The reception class and year one pupils are already really enjoying it. It is fun, it helps with learning and is also ideal for teaching them basic road safety too. We can’t thank Island Roads enough.”

Jarman: Pleased to have been able to help
Spencer said:

“It was quite a difficult thing to design because we were keen to fit in as much as we could in a relatively small space.

“But we are pleased to have been able to help out such a good school and we hope it serves its purpose.”

“The children from the reception and year 1 classes are absolutely delighted with their new playground. It will provide many teaching and learning opportunities for everyone in a fun and active way.

“We are so grateful to Island Roads for their generosity and the time they spent creating such a wonderful area.“