New trees for Frank James: All welcome to anniversary celebration

Sunday marks two years since guerilla gardeners first started looking after the grounds of the former hospital in East Cowes. 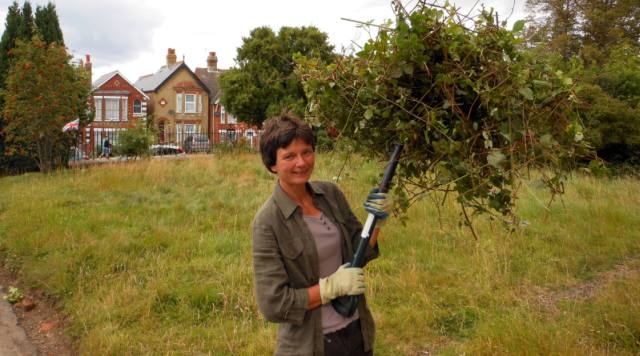 Thanks to Steve for this update from the Friends of Frank James. Ed

Since starting the guerilla gardening campaign to rescue the former hospital site, the Friends of Frank James have pruned existing trees including apples and cherries (and the notable commemorative ornamental cherry), and have added plants, including a pear tree and flowers for pollinating insects.

Work by Friends recognised
At the recent IOW Orchard Group AGM members acknowledged the work done at Frank James and volunteered to help by adopting the grounds as the group’s first home orchard and offering to plant some of their own young hazel and walnut trees there at the Friends event next Sunday (2nd March).

Two years of hard work
The day marks the second anniversary of the start of the campaign to end a decade of neglect at the nationally important site.

Since entering in the rain on 4th March 2012, the Friends have been working hard to halt and reverse the damage and to bring together the owners and authorities to agree on action to save Frank James.

All welcome on Sunday
With the owner’s consent, responsible visitors are again welcome to join the Friends and supporters, including the Orchard Group, on site between 12pm and 4pm.

Possibly, in the future some of the Island’s red squirrels could also visit to share nut trees at a restored Frank James site!

4 Comments on "New trees for Frank James: All welcome to anniversary celebration"

Keep up the good work Friends, see you on Sunday to show my support.

Vote Up20Vote Down
Steve Goodman
Our thanks to c. and everyone else who attended in support (including our MP, our Council leader, our Green party leader, our Union leader, Fat Samba’s leader, the ghost hunter leaders, and followers & individuals galore). The constant stream of visitors, the drumming, the showers, and the catering, meant that not much work was done, but thanks to the Orchard Group new walnut & apple trees were… Read more »
Vote Up20Vote Down
tryme

Ah, good to hear mention of James Grieve apples, a variety my late father planted for us many years ago, and delicious. Also ‘Fortune’, which we loved as children.

FJ, & VBG, would certainly benefit from the attention of somebody with good taste & a small fortune.